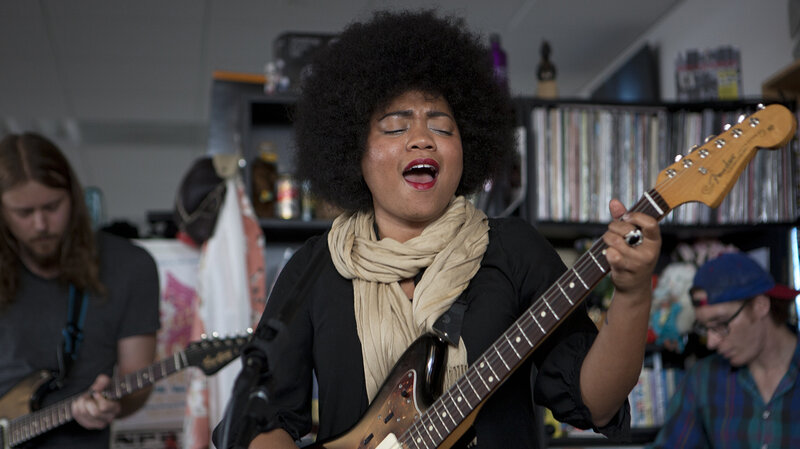 Each year, we ask unsigned artists from across the country to send us their songs as part of the Tiny Desk Contest. And each year, one artist wins the grand prize and gets to play their very own Tiny Desk concert.

But winning isn’t everything; NPR Music is introduced to thousands of talented musicians who send us videos of themselves playing their original songs behind their desks. We do our best to share the most impressive entries — NPR Music staff favorites; Contest judges’ favorites; public radio’s favorites and more — with the world. In the past, we’ve taken our winner on tour across the country and invited standout entrants to open for them. Sometimes, Bob Boilen is so blown away by an artist that, after seeing their performance, he invites them to play a set behind his Tiny Desk, too.

The first year of the Contest, we discovered Seratones, a gospel rock and roll band from Louisiana who caught our attention with singer-guitarist A.J. Haynes’ vibrant voice and enrapturing energy. In 2017, at the Tiny Desk Contest On The Road Tour in Portland, we met singer-songwriter Haley Heynderickx. She entered the Contest three years in a row, and while she never won, she says the Contest changed her life. We invited Heynderickx to perform her cathartic, delicate songs behind the Desk in 2018.

The most powerful story Bob Boilen has ever come across at the Tiny Desk — a story of friendship, compassion and determination that left us all in tears — comes from Bernie and the Believers, who entered the Contest in 2018 and performed a Tiny Desk concert later that year. That same year, artist Lau Noah, who sings in Catalan, Spanish, English and sometimes Hebrew, earned a spot at the Desk after she dazzled us with her achingly beautiful and thought-provoking song “La Realidad.”

The Contest also introduced us to California rapper Hobo Johnson, whose singularity was undeniable. Over 20 million users on YouTube have been roped in by the crash-and-burn explosive emotion in his 2018 Contest entry, “Peach Scone.” (And when his viral entry earned him a spot behind Bob’s desk, Bob welcomed him with an apt offering: homemade peach scones.)

You’ll find performances from all these artists we discovered through the Contest and more in this playlist. And if you’re an unsigned artist with a song to share, we hope you’ll enter this year’s Tiny Desk Contest by June 7.

Tiny Desks In This Playlist