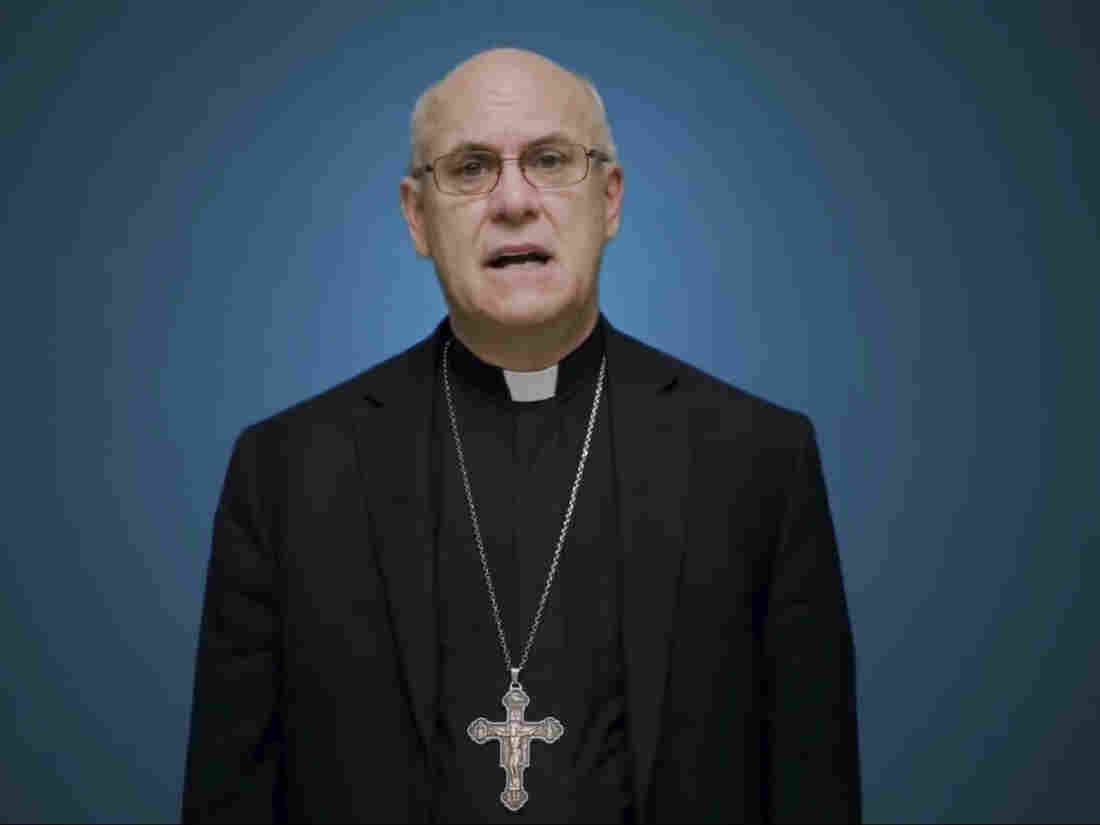 In this photo taken from video, Bishop Kevin Rhoades of Fort Wayne-South Bend, Ind., head of the doctrine committee for the U.S Conference of Catholic Bishops, addresses the body’s virtual assembly regarding a formal statement on the meaning of the Eucharist in the life of the church on Thursday.

In impassioned debate Thursday, U.S. Catholic bishops clashed over how to address concerns about Catholic politicians, including President Joe Biden, who continue to receive Communion despite supporting abortion rights.

Some bishops said a strong rebuke of Biden is needed because of his recent actions protecting and expanding abortion access. Others warned that such action would portray the bishops as a partisan force during a time of bitter political divisions across the country.

The issue is by far the most contentious agenda item at the national meeting of the U.S. Conference of Catholic Bishops, which is being held virtually. It will conclude Friday soon after an announcement of how the bishops cast their secret ballots on the Communion dispute.

If a majority of bishops approve, the USCCB’s doctrine committee will draft a statement on the meaning of Communion in the life of the church that would be submitted for a vote at a future meeting, probably an in-person gathering in November. One section of the document is expected to include a specific admonition to Catholic politicians and other public figures who disobey church teaching on abortion and other core doctrinal issues.

Bishop Donald Hying of Madison, Wis., said he speaks with many people who are confused by a Catholic president who advances “the most radical pro-abortion agenda in history,” and action from the bishops’ conference is needed.

Bishop Robert McElroy of San Diego countered that the USCCB would suffer “destructive consequences” from a document targeting Catholic politicians.

“It would be impossible to prevent the weaponization of the Eucharist,” McElroy said. “We will invite all of the political animosities that divide our nation into the heart of the Eucharistic sacrament.”

Biden, who attends Mass regularly, says he personally opposes abortion but doesn’t think he should impose that position on Americans who feel otherwise. He’s taken several executive actions during his presidency that were hailed by abortion-rights advocates.

The chairman of the USCCB doctrine committee, Bishop Kevin Rhoades of Fort Wayne-South Bend, Ind., said no decisions have been made on the final contents of the proposed document. He said bishops who are not on the committee would have chances to offer input, and the final draft would be subject to amendments before it is put up to a vote.

Rhoades also said the document would not mention Biden or other individuals by name, and would offer guidelines rather than imposing a mandatory national policy.

This would leave decisions about Communion for specific churchgoers up to individual bishops and archbishops. Cardinal Wilton Gregory, the archbishop of Washington, has made clear that Biden is welcome to receive Communion at churches in the archdiocese.

Gregory was among the dozens of bishops joining in Thursday’s debate, urging colleagues to defeat the measure and allow more time for candid, in-person dialogue before moving ahead.

“The choice before us at this moment is either we pursue a path of strengthening unity among ourselves or settle for creating a document that will not bring unity but may very well further damage it,” Gregory said.

The chairman of the USCCB’s Committee on Pro-Life Activities, Archbishop Joseph Naumann of Kansas City, Kan., disagreed that the bishops were being too hasty and said Biden had forced their hand.

“It’s not the bishops who have brought us to this point — it’s some of our public officials,” he said. “This is a Catholic president doing the most aggressive things we’ve ever seen on life at its most innocent.

San Francisco Archbishop Salvatore Cordileone, one of the most outspoken advocates of a USCCB rebuke to Biden, said the bishops’ credibility is already questioned by many Catholics and would erode further if they did not move forward with the document.

“The eyes of the whole country are on us right now,” he said. “If we do not act courageously in presenting this teaching document clearly and convincingly on this core Catholic value, how can we expect to be taken seriously on any other topic?”