They Had Leftover COVID Vaccines. So They Offered Them To Their Canadian Neighbors 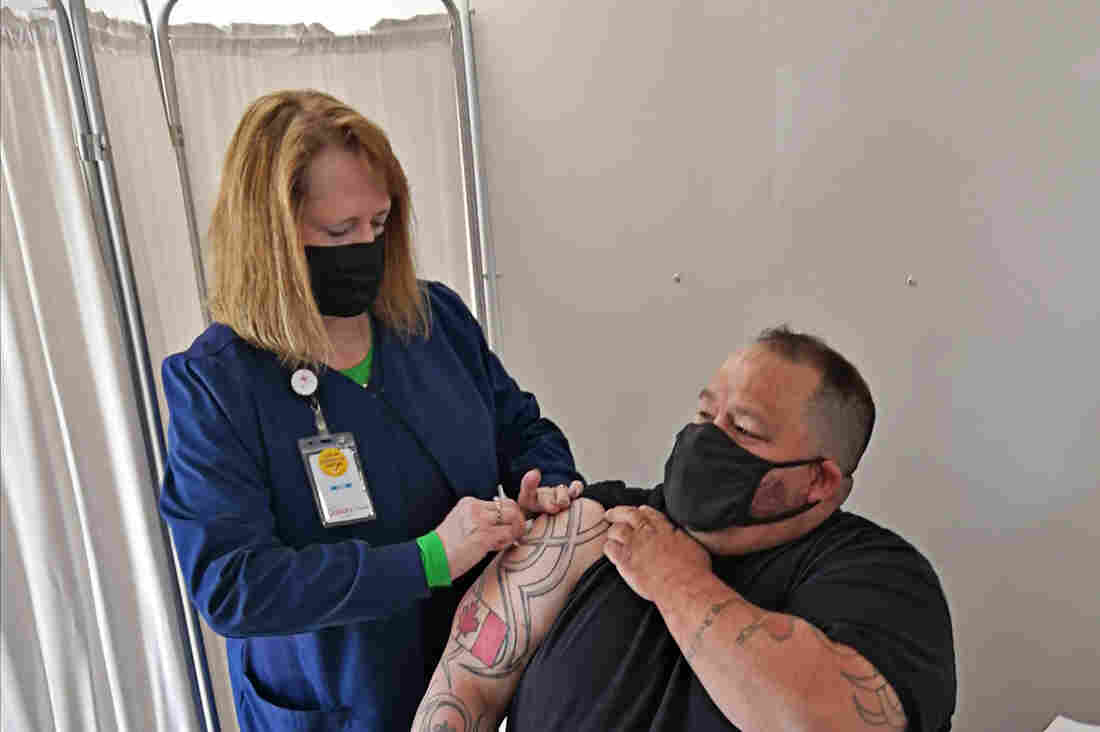 John Harrower, a truck driver from the Canadian province of Manitoba, receives a COVID-19 vaccine shot in North Dakota in late April.

MONTREAL — With just over 3% of Canadians fully inoculated against COVID-19, a growing number of America’s northern border states and communities have stepped up to offer excess vaccines to Canadians.

Truck driver John Harrower was on the road last month when he heard on the radio that North Dakota had agreed to vaccinate truckers from his home province of Manitoba.

While the United States and Canada have limited travel between them during the pandemic, he still crosses the border twice a week under exemptions for truck drivers transporting goods.

“I phoned, and I talked to this lovely lady named Doris at North Dakota health. And she made my appointment,” he said, “for the next time I was coming past the rest stop.”

Harrower, 45, had struggled to find an appointment back home that would not require taking time off work. Amid a vaccine shortage and high demand, Manitoba and many other provinces are delaying second doses by up to four months.

In North Dakota, he was able to get the first Moderna dose in late April and will receive his second one within weeks.

In the U.S., more than 36% of the population are fully vaccinated, although the pace of daily doses administered has been slowing.

The cross-border vaccine offers have come after frustrations grew in Canada over the pace of arrival of the large numbers of doses the Canadian government has ordered. Even as provinces ramp up vaccinations this month, several remain under severe public health restrictions enacted to overcome a variant-driven wave of COVID-19 infections that has strained hospitals.

As vaccine demand slips in the U.S., some Canadians have jumped at the chance to put America’s surplus doses to use.

Time to be “working closely with our neighbors”

Last month, North Dakota Gov. Doug Burgum said his state will vaccinate 4,000 truck drivers from Manitoba at roadside clinics and may also add oil workers. He said the program would have no impact on the progress of vaccinating North Dakotans.

“We’re starting to move from that place where instead of rationing vaccine, where we’re marketing it,” Burgum said in a news conference with the premier of Manitoba. “This is the time to move to start working closely with our neighbors.” 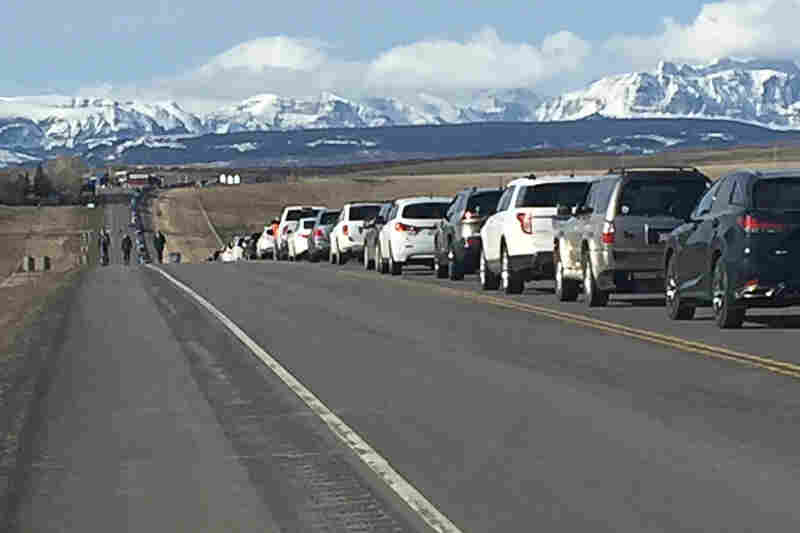 Drivers lined up for hours at the U.S. border near Cardston, Alberta, in late April to receive excess COVID-19 vaccines offered by the Blackfoot tribe to Canadians, some of whom traveled from as far as Toronto.

The territory of the Blackfoot Confederacy crosses the border between Alberta and Montana. The confederacy’s health director, Bonnie Healy, said over Zoom that its southern jurisdictions had achieved a 98% vaccination rate by April, and had hundreds of extra doses.

“Then it got to be urgent because their supply was going to expire if not used,” she said. The Blackfeet obtained permission to set up two vaccination clinics at the border, which members refer to as the “Medicine Line,” opening the second, at the end of April, to the general Canadian public.

“People were lining up in the middle of the night,” said Healy, “just really hoping for an opportunity to get vaccinated.”

With vaccine eligibility still descending by age group in Canada, she said, “We had some really sad cases of families not being able to leave their home for over a year because of the vulnerability of their 16 [or] 18-year-old family members that are severely immunocompromised.” 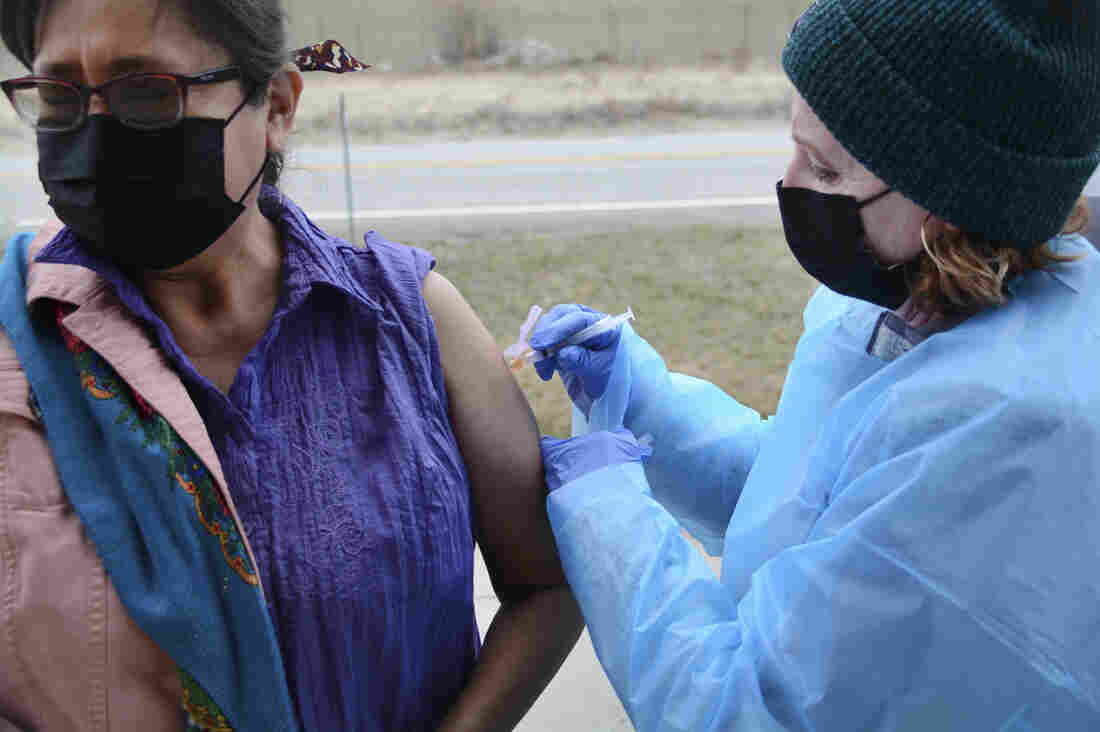 Sherry Cross Child, a Canadian resident of Stand Off, Alberta, receives a COVID-19 vaccine at the Piegan-Carway border crossing near Babb, Mont., on April 29. The Blackfeet tribe in northern Montana gave out surplus vaccines in April to its First Nations relatives and other residents from across the border.

The Akwesasne Mohawk Nation, which spans the borders of New York, Quebec and Ontario, was able to speed up vaccination of northern residents and others Canadians in close contact with community members.

In Alaska, the state’s chief medical officer, Dr. Anne Zink, delivered shots to Canadians herself on a recent visit to Hyder, Alaska. The tiny community hopes vaccinations will help to ease restrictions on most travel to its nearest neighbor, Stewart, in British Columbia.

“Honestly, when I was vaccinating it was kind of like a block party feel,” said Zink. “People were like, ‘I haven’t seen you in a year. How are you? It’s so good to see you!’ “

She had to take three planes to reach Hyder. The only road access comes through Stewart. Hyder’s five school-age children were only allowed to attend classes in Stewart in November.

“If we can really have that whole community vaccinated, Canada and Hyder will feel more comfortable about opening that border and allowing those people to move back and forth,” Zink said, noting the importance of the summer season in Alaska for many seasonal workers.

The border closure has also profoundly isolated Point Roberts, Wash., which sits on a peninsula separated from the rest of the state by British Columbia.

Point Roberts Fire Chief Christopher Carleton said he would like to open drive-in vaccination clinics for American citizens living in Canada, or even Canadian second home-owners whose presence has been sorely missed by local businesses.

“They could come down,” he said, “spend the summer with us, be fully vaccinated with us, and return to Canada safely for the communities that they live in.”

He’d need special accommodations at the border from federal authorities, like those that made other cross-border clinics possible, including an exemption to Canada’s 14-day quarantine for returning travelers.

“We need vaccines. They have vaccines.”

David Musyj, president of Windsor Regional Hospital in Ontario, hopes to access vaccination at a larger scale for residents of his community, also home to 3,000 health care personnel who work on the U.S. side of the border. His hospital system has received patients transferred from the hard-hit Toronto region in recent weeks.

Meanwhile, he noted, Canadians are inundated with American news coverage of states offering rewards and lotteries for Americans to get vaccinated.

Musyj said he has requested to have 75,000 excess vaccines offered by Michigan delivered to the Windsor region. He is also seeking ways to send more Canadians to vaccination sites across the border, in Detroit.

“We need vaccines. They have vaccines. They’ve been at it for weeks now where it’s walk-ins,” Musyj said. “They’re closing mass vaccination clinics down because there are not enough people.”