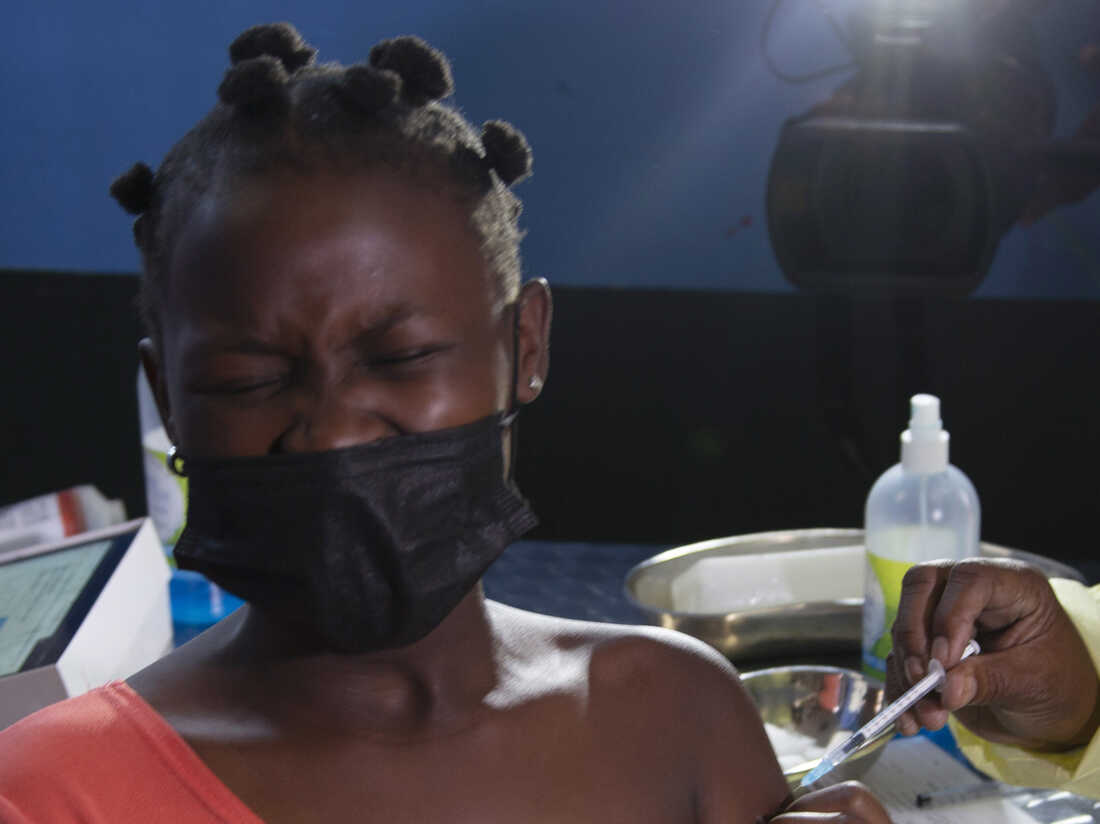 A young woman reacts as she receives a Pfizer jab against COVID-19, in Diepsloot Township near Johannesburg Thursday, Oct. 21, 2021.

BRUSSELS — The European Union said Friday it is planning to stop air travel from southern Africa to counter the spread of a new COVID-19 variant as the 27-nation bloc is battling a massive spike in cases.

“The last thing we need is to bring in a new variant that will cause even more problems,” said German Health Minister Jens Spahn.

EU Commission President Ursula von der Leyen said in a statement that she “proposes, in close coordination with the member states, to activate the emergency brake to stop air travel from the southern African region.”

A new coronavirus variant has been detected in South Africa that scientists say is a concern because of its high number of mutations and rapid spread among young people in Gauteng, the country’s most populous province.

Germany said von der Leyen’s proposal could be enacted as soon as Friday night. Spahn said airlines coming back from South Africa will only be able to transport German citizens home, and travelers will need to go into quarantine for 14 days whether they are vaccinated or not.

Germany has seen new record daily case numbers in recent days and passed the mark of 100,000 deaths from COVID-19 on Thursday.

A fourth spike of the coronavirus is hitting the 27-nation EU especially badly, with governments scrambling to tighten restrictions in an attempt to contain spread. The flight ban proposal came in the wake of similar action from Britain on Thursday.

The U.K. announced that it was banning flights from South Africa and five other southern African countries effective at noon on Friday, and that anyone who had recently arrived from those countries would be asked to take a coronavirus test.

U.K. Health Secretary Sajid Javid said there were concerns the new variant “may be more transmissible” than the dominant delta strain, and “the vaccines that we currently have may be less effective” against it.

The coronavirus evolves as it spreads and many new variants, including those with worrying mutations, often just die out. Scientists monitor for possible changes that could be more transmissible or deadly, but sorting out whether new variants will have a public health impact can take time.

Currently identified as B.1.1.529, the new variant has also been found in Botswana and Hong Kong in travelers from South Africa, he said.

The World Health Organization’s technical working group is to meet Friday to assess the new variant and may decide whether to give it a name from the Greek alphabet.

The World Health Organization says coronavirus infections jumped 11% in Europe in the past week, the only region in the world where COVID-19 continues to rise. The WHO’s Europe director, Dr. Hans Kluge, warned that without urgent measures, the continent could see another 700,000 deaths by the spring.

The EU’s emergency brake mechanism has been set up to deal with such emergencies.

Where the epidemiological situation of a third country or region worsens quickly, in particular if a variant of concern or of interest has been detected, member states should adopt an urgent, temporary restriction on all travel into the EU. This emergency brake should not apply to EU citizens, long-term EU residents and certain categories of essential travelers, who should nevertheless be subject to appropriate testing and quarantine measures, even if fully vaccinated.

Such restrictions should be reviewed at least every two weeks.