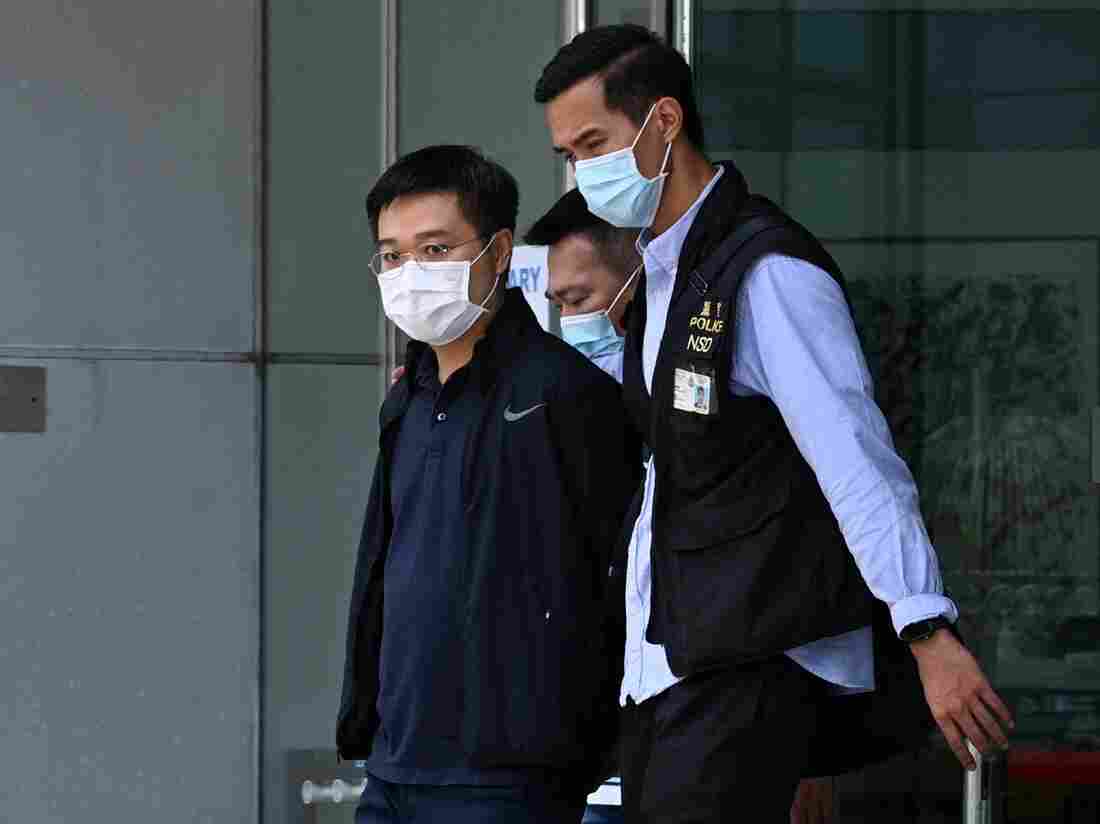 Apple Daily editor-in-chief Ryan Law is escorted by police to a waiting vehicle outside the entrance of the Apple Daily newspaper offices in Hong Kong on Thursday.

BEIJING — Hong Kong has arrested five editorial executives, including the editor in chief, of media outlet Apple Daily, freezing more corporate accounts and imperiling the future of the region’s most feisty, investigative paper.

Ryan Law, the chief editor, the CEO of the paper’s publisher Cheung Kim-hung, the publisher’s chief operating officer Chan Puiman, and two other editors were among those arrested. The Apple Daily live stream showed Law being led out of the paper’s offices in handcuffs early Thursday morning.

Li Guihua, a senior officer with Hong Kong’s special legal body set up to prosecute national security cases, said that the editors were arrested because of “dozens of articles in Apple Daily that called on foreign agencies to impose sanctions on China or the Hong Kong government.”

Around 200 police officers were sent to Apple Daily’s offices to search the premises and confiscate “journalistic materials,” according to a national security police statement.

The five editors are among the more than 120 or so arrests under the national security law as Beijing tightens its control over Hong Kong. Ten of those arrests include Jimmy Lai and nine business associates, stemming from their activism. Lai, the founder and publisher of Apply Daily, is currently serving a prison term for separate charges related to organizing protests as part of a mass demonstration movement in 2019.

As a result, Lai’s shares in Apply Daily’s publishing company and his related corporate bank accounts had already been frozen. However, the paper’s readers rallied after his arrest last year, buying more subscriptions and company stock, briefly sending its shares soaring at more than three times the usual price.

But Li, the national security officer, said Thursday the state had frozen the assets of three other companies affiliated with Apple Daily and that of its publisher. Trading of its stock shares has been suspended, leaving Apple Daily few financial resources to fall back on.

Simon, the Next Media executive, said the paper would continue to chug on with reporting and publishing with a skeleton staff.

“Every single time they’ve come up with a plan to kill us, we’ve managed to survive,” says Simon. “This morning, our staff has told me until the lights go out, we keep publishing.”