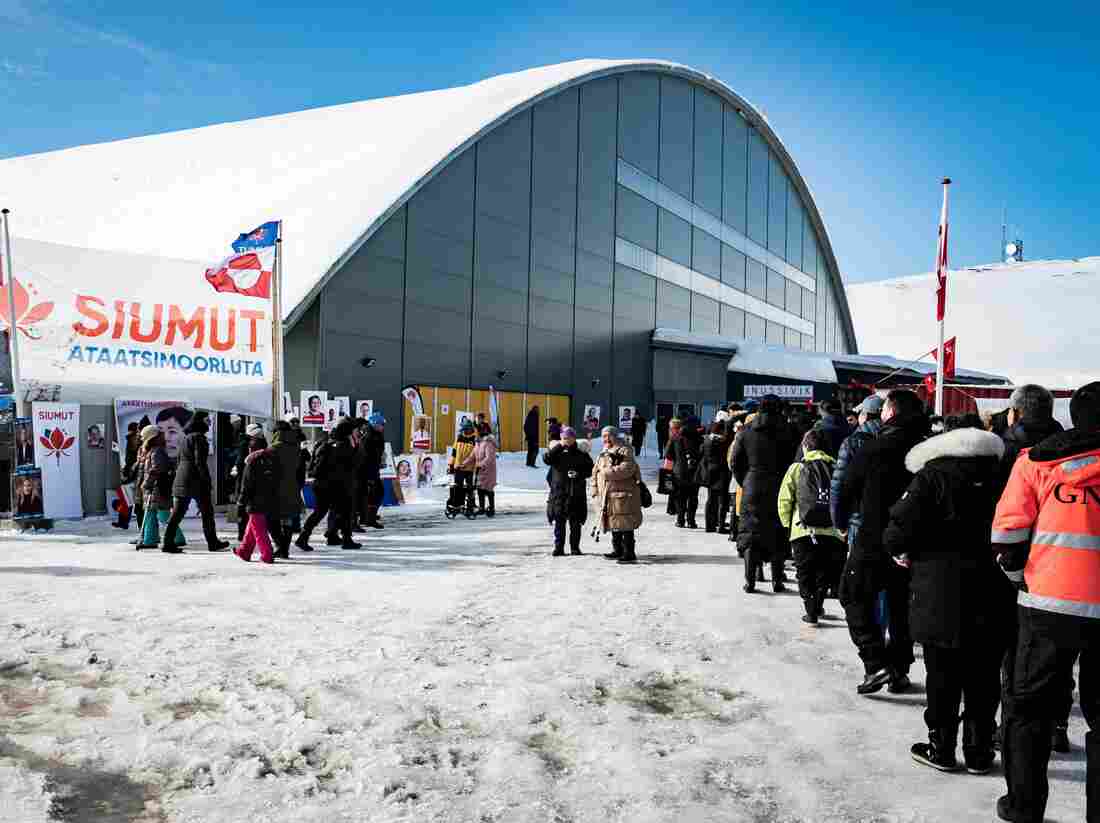 Voters stand in line to cast ballots for Greenland’s parliamentary elections at a polling station in the capital, Nuuk, on Tuesday.

Voters in Greenland have given an opposition party its first-ever chance to form a government, after a campaign that sought to define the limits of development on the Arctic island.

The Inuit Ataqatigiit (IA) party won 37% of the vote, compared to 29% for the ruling social-democratic Siumut party, according to official results reported by Reuters. The vote totals should allow IA to grab 12 seats in the 31-member unicameral legislature, known as the Inatsisartut, meaning that it will likely need to form a coalition with support from one of the smaller parties.

At the center of Tuesday’s election was the fate of a rare-earth and uranium mining project in the country’s south that has pitted those favoring more aggressive development against others who want more safeguards to protect the island’s fragile Arctic environment.

Inuit Ataqatigiit (“Community of the People”) had campaigned against the Kvanefjeld project, which was granted preliminary approval under Prime Minister Kim Kielsen’s Siumut party government.

Greenland, about three times the size of Texas, is the world’s largest non-continental island with a population of about 56,000. In 1979, it became self-governing within the Kingdom of Denmark, which maintains control over the island’s foreign, monetary and defense policies.

In recent years, its vast untapped mineral resources have attracted the attention of international companies hoping to tap into the growing market for rare-earth elements — a group of 17 similar metals often found in the same deposit. They are used as components in everything from smartphones to electric cars and weapons. Those deposits have become more accessible in recent years due to glacial melting caused by climate change.

Among other rare-earth metals, the Kvanefjeld project aims to tap into deposits of neodymium, an element used to create miniature permanent magnets that have become vital to a number of high-tech industries. The Australian company that runs the mine also wants to extract uranium. The project’s largest investor is a Chinese company.

“The people have spoken,” Egede said. “It won’t happen.”

Major mining project takes centre stage in Greenland vote: April 6, 2021 — #Greenland #Kuannersuit Greenland’s next parliament will decide the future of a deeply controversial mine on Kuannersuit — one of the largest rare earths deposits in the world… https://t.co/kelbSTZCAG pic.twitter.com/hW0RiCo8mB

Like many Greenlanders, IA does not oppose mining, but also has a strong environmental focus. Most of the island’s residents say they want eventual independence from Denmark. Some see the potential from exploiting Greenland’s rich ore deposits as the key to creating economic clout to go it alone.

“It’s not that Greenlanders don’t want mining, but they don’t want dirty mining,” Mikaa Mered, a lecturer on Arctic affairs at HEC business school in Paris, was quoted by Reuters as saying.

“Greenlanders are sending a strong message that for them it’s not worth sacrificing the environment to achieve independence and economic development,” he said.

In 2019, then-President Donald Trump offered to buy Greenland from Denmark, comparing such a purchase to “a large real estate deal.”

However, the idea was rebuffed both in Greenland and in the Danish capital, Copenhagen.

Danish Prime Minister Mette Frederiksen said emphatically that “Greenland is not for sale.”