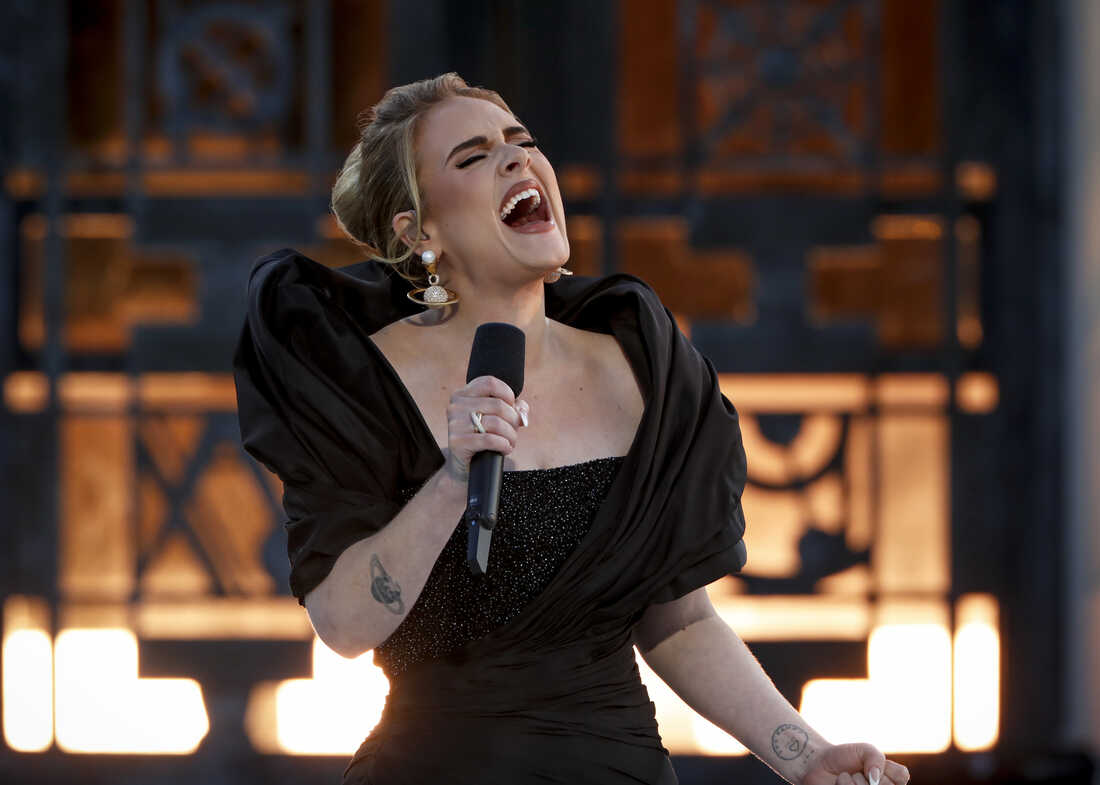 Adele sings in front of Griffith Observatory in Los Angeles during a televised concert to promote her fourth album, 30, which chronicles the aftermath of her divorce in ways that take subtle chances with the star’s signature cathartic style.

Watching the cozily epic concert segments of Adele’s album-launching Oprah special Sunday evening, I couldn’t help thinking she’d gifted reviewers with a metaphor. She stood on the steps of the Griffith Observatory in a gown that enclosed her shoulders like a black cirrus cloud, glittering Saturn-shaped baubles dangling from her ears. A tattoo of the orb with her current home, Los Angeles, at its center graced the forearm holding her microphone. In interviews, Adele has mentioned astrological reasons for this imagery — the tumultuous Saturn return that occurs at the cusp of turning 30 — but it says something about her status in the pop world, too. With her massive voice, unique charisma and enduring hit-making power, Adele is not just another star, but her own planet. Her movements shift the very tides of pop.

Can a planet come down to earth? That’s the question Adele asks in her fourth studio release, 30, a chronicle of divorce and soul-searching recovery that is, more crucially, a thrilling redefinition of Adele’s artistry. She hasn’t abandoned her reliable templates — there’s a dance-floor stomper, “Oh My God,” that will please fans of “Rolling In the Deep,” and more than one epic ballad built to unfurl stormily through a concert hall. But while Adele earned adulation for evoking, in listeners, the sense of being enveloped in emotion, on 30 she offers a more varied experience. It’s a shift that’s sometimes subtle, evident in lyrics that make more room for both self-criticism and a sense of perspective, and in the way she responds to the rhythms and background voices within each song instead of merely powering forward. She’s in command, but taking chances. “Complacency is the worst trait to have, are you crazy?” she sings over a beat that bears the perfume of lovers rock on “Woman Like Me,” one of several tracks produced by Inflo, the producer behind the U.K. R&B collective Sault. She’s dressing down a potential new lover who’s disappointed her, but she could be offering a motto for her thirtysomething self.

Adele’s stance throughout 30 is one of engagement — with her own inner struggles, with the new world that opens up as she leaves a marriage, and with the musical milieu that’s emerged since 25 came out in 2016. Adele has, it seems, been listening to young contenders on both sides of the Atlantic, from London sensations Celeste and Cleo Sol to American R&B standard-bearer Jazmine Sullivan. Her ability to modulate her voice has grown and balanced out her sheer power, and she engages it to try different methods of phrasing, to quiet down in the way many vibe-seeking chanteuses do now. That’s a risky move, but Adele remains self-aware. The storyteller who once strummed in London’s Brockwell Park with friends returns in those moments to balance out her experiments with the salt of her essential plainspokenness, the quality that has always made Adele herself.

“Mama’s got a lot to learn,” she murmurs in the chorus of “My Little Love,” a hip-hop pastiche and the most experimental track on 30, which incorporates phone voice notes of conversations about loss and safety between the newly single mom and son Angelo. The song is a mood tracker, but that lyric also serves as an admission of the challenge Adele faces as a white woman who, like nearly every white musician, remains hugely indebted to Black progenitors.

Adele became one of the century’s most beloved singers by cultivating a space beyond musical trends, grounded in a mobile retro-pop sound that borrowed equally from the soul-driven 1960s, the blockbuster 1980s and the timeless practice of untethering big ballads from any context whatsoever. She stood on this surface and, sharing tales of heartache, made it a sanctuary, but as long as she stayed there it could often feel like she was in musical dialogue with nothing and no one. 30, on the other hand, engages with the world — through lyrics that trade adolescent romanticism for genuine self-examination, arrangements that reflect the present moment, and a vocal presence as warm and multifaceted as Adele is in interviews and her onstage patter, where she’s a pal who tells long stories and makes jokes, not a gravitational force.

The third decade of the 21st century is not a time of big voices. It’s tempting to view Adele as the last of something, but her genius is in confusing scale, in translating her grandeur into relatability. Adele may stand alone in the pop universe, but when you, the listener, are immersed in her music, she stands alone with you. This ability to connect as a feelingful person, to be a friendly planet, has always been as important as the sublimity of her voice. That gift hasn’t faded; she can still animate a strictly emblematic chorus like, “Hold on, you are still strong, love will still come,” with the lifeblood of spontaneity.

Several elements merge to make this Adele’s most musically interesting and conceptually rich work. The starting point is that better-trained voice, which at times sounds like an entirely new instrument. Years of care following an early-career vocal cord injury have led her to explore registers beyond her reliable gut, and she’s become more intuitive, conversational and in touch with the grooves and dancebeats her producers craft for her. Those collaborators take up the challenge Adele posed for herself by writing songs that dwell on complicated and sometimes even ugly feelings — the guilt she feels at breaking up her family and her distress at trying to explain divorce to her son, the alternating excitement and fear as she finds herself unpartnered for the first time in her adult life — and don’t automatically reach for the catharsis of big notes that won her international devotion. Don’t worry, swoon junkies, those notes still hit sometimes. But Adele is more likely to trade them in for a funky breakbeat, as she does on “Can I Get It,” or the gentle push and pull of those gliding “E”s on the album’s first single, “Easy On Me.”

Fans determined to weep their way through 30 as they have with Adele’s previous albums may be disappointed. This chronicle of separation does not aggressively serve up heartbreak. Though the publicity campaign has presented the album as a reflection of pain and anxiety after Adele’s split from her partner of 10 years, Simon Konecki, its spirit is one of musical play: the singer trying out different tones and techniques, from the jazz standards-inspired opener, “Strangers By Nature” (with its immortally campy first line, “I’ll be taking flowers to the cemetery of my heart”) to the loose, Honky Chateau-era Eltonisms of “I Drink Wine” and the sinuous flow of the delightedly sensual “All Night Parking,” which kicks off with a light-handed sample from the late Pittsburgh jazz great Erroll Garner and transforms it into a sample around which Adele wraps a vocal as light as twilight air.

The free musical mood of 30 correlates with the story it tells, of a breakup that’s more complicated than the ones Adele immortalized in high Romantic ballads like “Hello.” In her Oprah interview, Adele made it clear that she was the instigator of her divorce, not because Konecki, who remains a “best friend,” was abusive or neglectful but because she felt herself growing beyond the relationship. She chose to break up the home for which she’d longed as a child of divorce, and hazard her son’s pain, in the name of greater ultimate happiness for everyone involved. This most common kind of split engenders emotions that her adored songs of contemplative romantic desolation, like “Hello” or “Someone Like You,” don’t quite serve: the shame of being the heartbreaker, the doubt that comes with loneliness, the need to find a way through ambiguity toward inner strength.

“Cry your heart out, it’ll clean your face,” an auto-tuned phalanx of voices advises Adele in “Cry Your Heart Out” as she details her daily stumbles. “When you’re in doubt, go at your own pace.” Adele answers this Motown-style Greek chorus with lighthearted crankiness: “Please stop calling me, it’s exhausting,” she sighs. But she owns her mess. “I created this storm, it’s only fair I have to sit in its rain,” she sings, adding a little vocal run to boost her own self-confidence. It’s not “Love on Top,” but she’s getting there.

The arrangement of “Cry Your Heart Out” tricks out the template of the girl group sound in a new way, as have many other savvy miners of R&B history, from the Pointer Sisters to Lauryn Hill and Adele’s standard-bearer, Beyonce. Adele has never truly orbited alone through pop’s omniverse — she began her career within a group of fusion-oriented singer-songwriters including Estelle, Rumer, Duffy and Corinne Bailey Rae, and now she’s connecting with a new wave of jazz-soul artists like Celeste and Sault (and perhaps finally nodding musically to her “best friend,” Drake). And always, she’s thinking of Queen Bey.

Longtime collaborators like Max Martin, Tobias Jesso, Jr. and Greg Kurstin accommodate these alignments with varying degrees of subtlety; Kurstin co-wrote and produced “My Little Love,” and was seemingly inspired by similar spoken interludes on both Sullivan’s Heaux Tales and Sault’s Nine. Most telling, however, is her new partnership with Inflo, who helms three tracks, including the gospelized show-stopper “Hold On.” That production’s slow crescendo from a misty beginning, with its choir in the distance, to the familiar monumentalism of an Adele barn-burner does something to the form. It makes the song feel more connected to everything in music that made it possible, building a world around it.

Another important musical work whose makers built a world around it, of course, is Beyonce’s Lemonade, the masterwork that Adele’s last album defeated at the Grammys in 2017, much to the horror of most intelligent music fans, including the planetary voice herself. It’s tempting to identify 30 as Adele’s own version of that inimitable expression of heartache and resolve, but such comparisons can only go so far. Lemonade engaged history in a way that 30, whose triumphs are stylistic and aesthetic but not political, cannot. It spoke for a community, a “we,” in a way that Adele, I think, would not strive to emulate. In fact, one of the strengths of 30 is its grounding in unmistakably personal details, both sonic and lyrical. Adele still gravitates toward expertly rendered big flourishes — the couplet that grounds “Hold On,” “May time be patient / may pain be gracious,” is one of her best — but she is also learning that it can be fruitful to go small in a song, to write or sing something that puts aside the universal for the delicate, the offhand, the small gamble. 30 still offers many ways for Adele to be our planet, high in the sky, making us marvel. But it’s best when she touches down.