Merriam-Webster’s 2021 word of the year is, of course, ‘vaccine’ 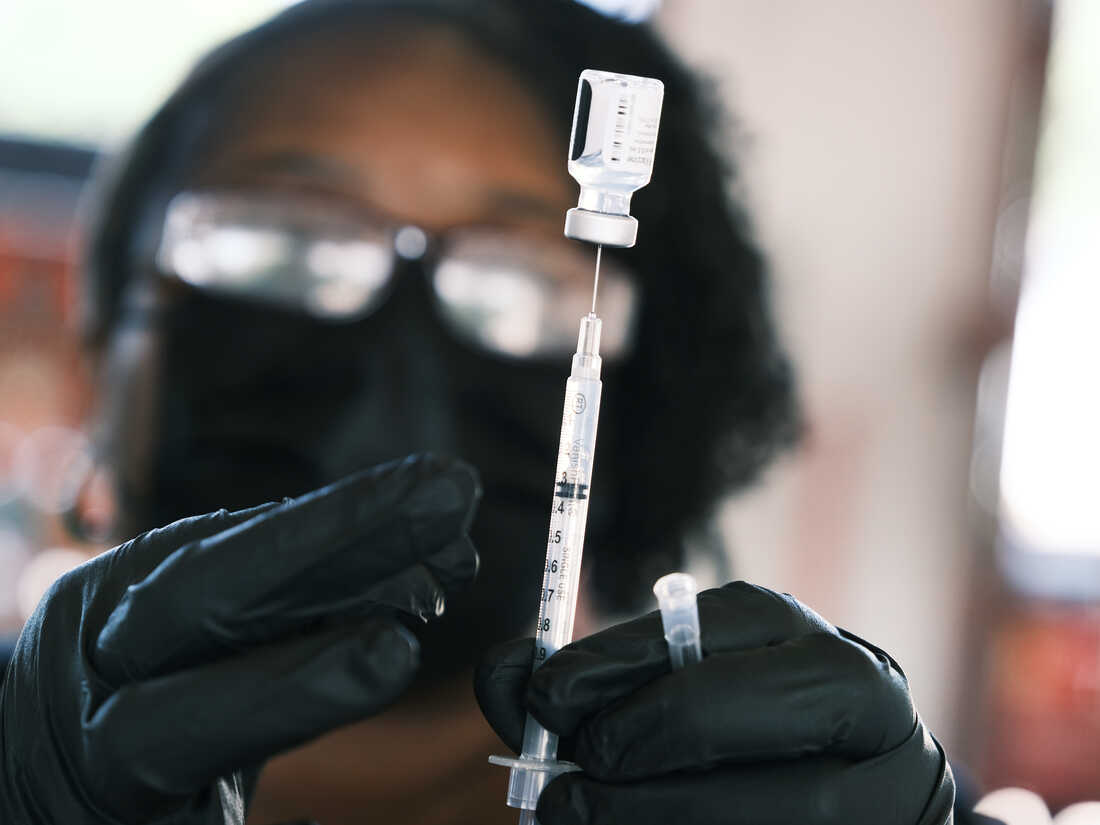 A person prepares to administer a Pfizer COVID vaccine at a clinic in Ferguson, Missouri in August 2021. Merriam-Webster has chosen “vaccine” as the word of the year, citing a sustained surge in lookups.

In 2020, the Merriam-Webster dictionary selected “pandemic” as its word of the year.

This year, like some 59% of fully inoculated Americans, it went with “vaccine.”

The publishing company noted that the word holds particular significance both as a medical term and a vehicle for ideological conflict.

“For many, the word symbolized a possible return to the lives we led before the pandemic,” it said in Monday’s announcement. “But it was also at the center of debates about personal choice, political affiliation, professional regulations, school safety, healthcare inequality, and so much more.”

Searches were up more than 600% from last year

It notes that interest in the word has been high since the start of the pandemic, with people searching and discussing the funding, development and distribution of vaccines well before they were actually available at pharmacies.

And lookups of “vaccine” jumped by 535% in August, which Merriam-Webster says is because “discussions about policy, approval, and vaccination rates — rather than the vaccine itself — sent people to the dictionary.”

For context: This was around the time when New York and California mandated vaccines for health care workers, the Food and Drug Administration granted full approval to the Pfizer-BioNTech vaccine and the Biden administration announced plans for booster shots for the general U.S. public, among other headlines.

“This new higher rate of lookups since August has remained stable throughout the late fall, showing not just a very high interest in vaccine, but one that started high and grew during the course of 2021,” Merriam-Webster added.

A groundbreaking vaccine calls for a revised definition

And what were people finding when they searched up the word? Merriam-Webster says a new type of vaccine merited a new and improved definition.

The company revised its entry for the word in May, since the mRNA COVID-19 vaccines trigger an immune response in an entirely new way.

The definition used to be: “A preparation of killed microorganisms, living attenuated organisms, or living fully virulent organisms that is administered to produce or artificially increase immunity to a particular disease.” Now, it reads:

1 : a preparation that is administered (as by injection) to stimulate the body’s immune response against a specific infectious agent or disease: such as

a : an antigenic preparation of a typically inactivated or attenuated (see ATTENUATED sense 2) pathogenic agent (such as a bacterium or virus) or one of its components or products (such as a protein or toxin)

b : a preparation of genetic material (such as a strand of synthesized messenger RNA) that is used by the cells of the body to produce an antigenic substance (such as a fragment of virus spike protein)

The dictionary had several runners up for Word of the Year, rounding out the list to a neat 10. The other contenders include insurrection, perseverance, woke, infrastructure, Murraya, cisgender and Meta. But they couldn’t compete with “vaccine” for the top spot.

“The promising medical solution to the pandemic that upended our lives in 2020 also became a political argument and source of division,” it said. “The biggest science story of our time quickly became the biggest debate in our country, and the word at the center of both stories is vaccine.”