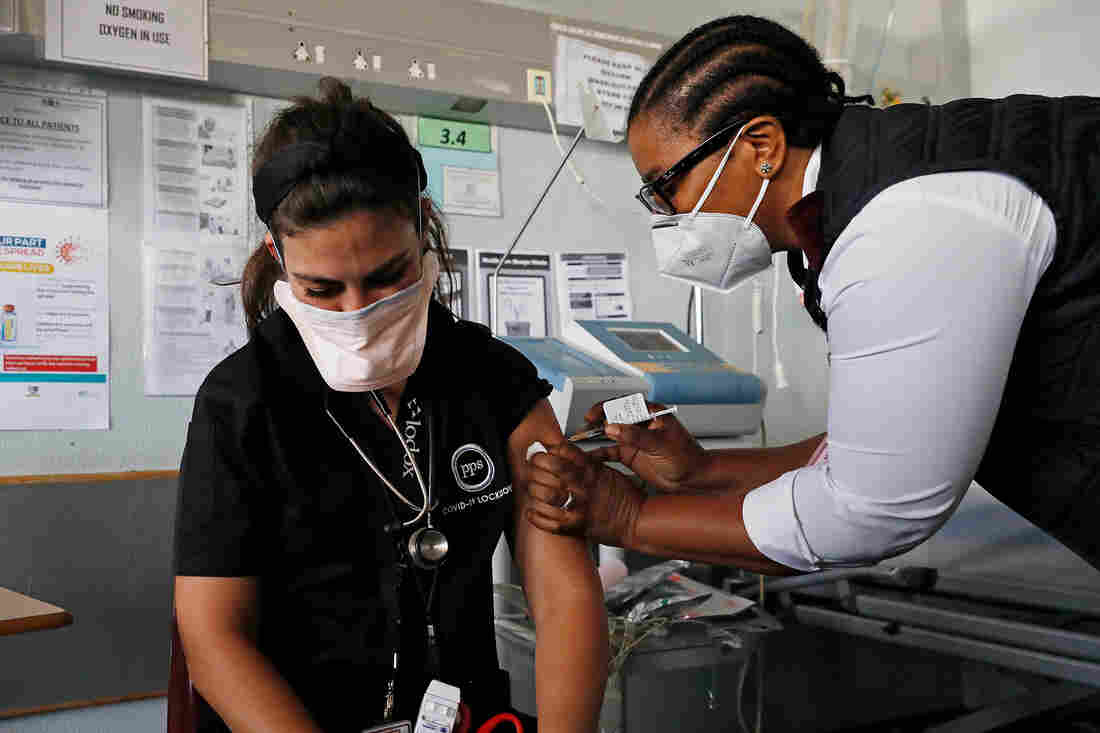 Dr. Anike Baptiste receives a dose of J&J from nurse Mokgadi Malebye at a Pretoria hospital last February. South Africa is one of the countries that announced a pause on the J&J vaccine while more research is done into potential blood clots that occurred in younger women after getting the vaccine.

The Johnson & Johnson vaccine pause in the U.S. – because of reports of rare cases of potentially fatal blood clots in a small number of vaccinated women – could have global ramifications.

Even though the J&J vaccine so far has had very limited distribution outside of the United States, it’s slated to provide more than a billion doses to the global fight against COVID.

J&J is authorized in, among other countries, Brazil, Canada, Peru, Chile and New Zealand (although none of those countries have received shipments yet).

Two weeks ago, J&J cut a deal with the African Union to provide African nations with 400 million doses of the vaccine but those vials aren’t slated to start arriving on the continent until the third quarter of this year.

And the COVAX program, which aims to provide vaccine doses to low- and middle-income countries, has plans to distribute half a billion J&J doses later this year.

Just as U.S. regulators were concerned by the blood clots, so are regulators worldwide. Soon after U.S. regulators paused the use of the J&J single-dose vaccine, health authorities in many European countries and in South Africa announced that they were also putting it on hold.

“We have determined to voluntarily suspend our rollout until the causal relationship between the development of clots and the Johnson & Johnson vaccine is sufficiently interrogated,” South African Health Minister Zweli Mkhize said in an online press briefing on Tuesday.

On Twitter, Mkhize later encouraged South Africans “to be supportive of our experts and scientists as they work under enormous pressure to give us answers on this worrying development so that we may proceed safely with the global vaccination programme.”

By contrast, France, which received its first shipment of 200,000 doses of J&J this week, says it plans to go forward with using it among people over age 55 and is expecting another 600,000 doses of the J&J immunization by the end of the month.

J&J was supposed to start distributing its COVID vaccine in Europe in the coming weeks. But European regulators last week launched an investigation into whether J&J’s jab may cause a rare blood clotting condition in some people one to two weeks after vaccination.

The investigation in the U.S. and other countries grew out of a probe that found a probable link between AstraZeneca’s COVID shot and a few dozen severe blood clots — some of them fatal. The European Medicines Agency said the condition occurred at a rate of about 1 in 100,000 people who got the AstraZeneca vaccine in mainland Europe — and 1 in 600,000 among recipients in the U.K.

Young women in their 20s and 30s appeared most susceptible to the rare side effect according to the AstraZeneca data.

The reported clotting issues in half a dozen patients who received the J&J shot appear to be very similar to the condition seen with AstraZeneca: The person gets stroke-like symptoms, severe headaches and experiences a drop in blood platelet levels at the same time that clots form.

“These reports point to a ‘safety signal,'” the European Medicine’s Agency’s safety committee noted on Friday, “but it is currently not clear whether there is a causal association between vaccination with COVID-19 Vaccine Janssen [Janssen Pharmaceuticals is the Belgium-based subunit of J&J] and these conditions.”

Rebecca Weintraub leads vaccine delivery response at Ariadne Labs in Boston. She points out that more than 700 million doses of COVID vaccine have now been distributed globally and “the number of (severe) side effects is in the hundreds.”

Weintraub, who is also a physician at Brigham and Women’s Hospital, says the public should look at this as a “pause, not a disruption,” reminding us that the U.S. has a “vigorous system that takes adverse events seriously.”

She says it should give the public confidence that regulators — at the first hint of a possible problem — ordered a halt so that scientists can review the incidents and look for ways to address any safety issues that arise.

She also underscores the need for a portfolio of vaccines. “There’s going to be some of these vaccines that are better for certain populations,” she says. “It’s better for the global market to have multiple vaccines from different platforms that lets us leverage our manufacturing capacity. That let us pause on one vaccine that may need to be reviewed and we have others within our portfolio. So that’s what what’s happening today.”

She predicts that with J&J, “We’ll resume vaccinating likely within days with better evidence-based guidance that’s been reviewed by the experts at the FDA, the CDC.”

The assistant director of the Pan American Health Organization, the WHO’s regional office for the Americas, Jarbas Barbosa, says the pause of J&J hasn’t had any effect in Latin America because nations in the region haven’t yet gotten deliveries of J&J’s vaccine. He says the earliest that could happen would be June or July but in the meantime he notes that the WHO still lists J&J as an authorized vaccine.