Coinbase, A Bitcoin Startup, Goes Public. Is Crypto Really The ‘Future Of Finance’? 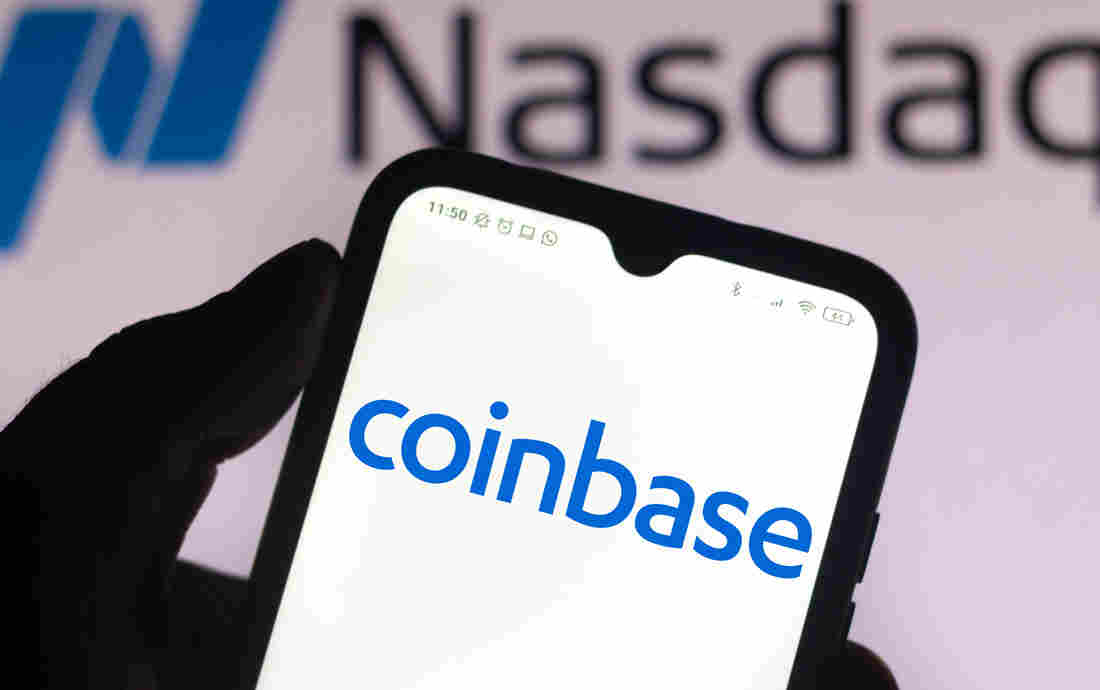 Coinbase on Wednesday became the first major cryptocurrency company to be publicly traded on the Nasdaq.

Coinbase, a San Francisco startup that allows people to buy and sell digital currency, became the first major cryptocurrency company to go public when it made its stock market debut on Wednesday.

Trading began around $381 a share, pushing the company’s valuation close to $100 billion. That’s about what Facebook was worth when it had its initial public offering in 2012.

Coinbase’s listing on the Nasdaq under the ticker symbol “COIN” was heralded by enthusiasts as a turning point for the once-obscure digital currency.

“Today was a landmark moment,” said cryptocurrency investor Ian Lee. “Crypto is the future of finance.”

Bradley Tusk, a political consultant and venture capitalist who backed Coinbase, said the company’s public offering shows that more Wall Street banks and other traditional investors are warming up to the idea of cryptocurrency.

“People have had doubts about crypto for a long time. And I don’t blame them,” Tusk said. “But what it did become, whether it was intended or not, is an asset class — something that people looking for a really balanced portfolio want to be in.”

But Tusk concedes that cryptocurrencies are notoriously volatile.

“Will cryptocurrency ever be used for everyday items? Not sure,” Tusk said. “But another way to think about it is, are we going to hit a point where all payments are digital and we won’t use cash or credit cards? Absolutely.”

Coinbase’s mission: Build the ‘the cryptoeconomy’

Like many startups in the crypto world, Coinbase has positioned itself as having the potential to disrupt the global financial system.

“Today, the way that we invest, spend, save, and generally manage our money remains cumbersome, inaccessible, expensive, and regionally isolated,” Coinbase wrote in a filing with the Securities and Exchange Commission. “We are building the cryptoeconomy – a more fair, accessible, efficient, and transparent financial system for the internet age.”

At the time of the filing in December 2020, Coinbase told regulators that 7,000 retail and financial institutions and 43 million users were active on the platform.

Armstrong, 38, is now considered one of the richest individuals in the world, with a net worth around $16 billion.

“There’s a saying that the best way to predict the future is to create it. Hopefully we helped make the future happen a little sooner than it otherwise would have in the crypto space,” Armstrong tweeted on Wednesday.

Researchers have long pointed to cryptocurrency’s appeal to those engaged in fraud and other illicit activity like money-laundering, since the largely unregulated markets make it easy to conceal transitions. And lawmakers in Washington have been working to devise rules and regulations to bring government oversight to the industry.

But with laws slow to adapt, interest in crypto markets has been booming, especially in the pandemic.

Other cryptocurrencies, like Ethereum, have also hit new record highs.

They’ve been helped by the hype around non-fungible tokens, or NFTs, the digital collectibles that are fetching eye-popping sums for what is essentially a string of computer code that confirms that a buyer has a unique version of something that exists solely on the Internet.

To venture capitalist Tusk, a broader theme emerges from the froth around crypto-related spending during the pandemic.

“People have less trust in government and the media and Wall Street than they ever have before,” Tusk said, adding that many are now instead placing trust in the decentralized system that supports cryptocurrency.

But, he said, there’s a less high-minded component of this moment bringing a crypto craze: “Everyone was at home and bored and playing around with their computers, which didn’t hurt.”

Whether that buzz will persist as the world opens up and people are less glued to their devices is the subject of debate.

Tusk said he invested in Coinbase because it makes money on both sides of a Bitcoin transaction, yet he himself does not feel comfortable buying cryptocurrency.

“I don’t have a great read on whether Bitcoin is going to go up or down,” he said. “So I don’t trade in the currency at all.”