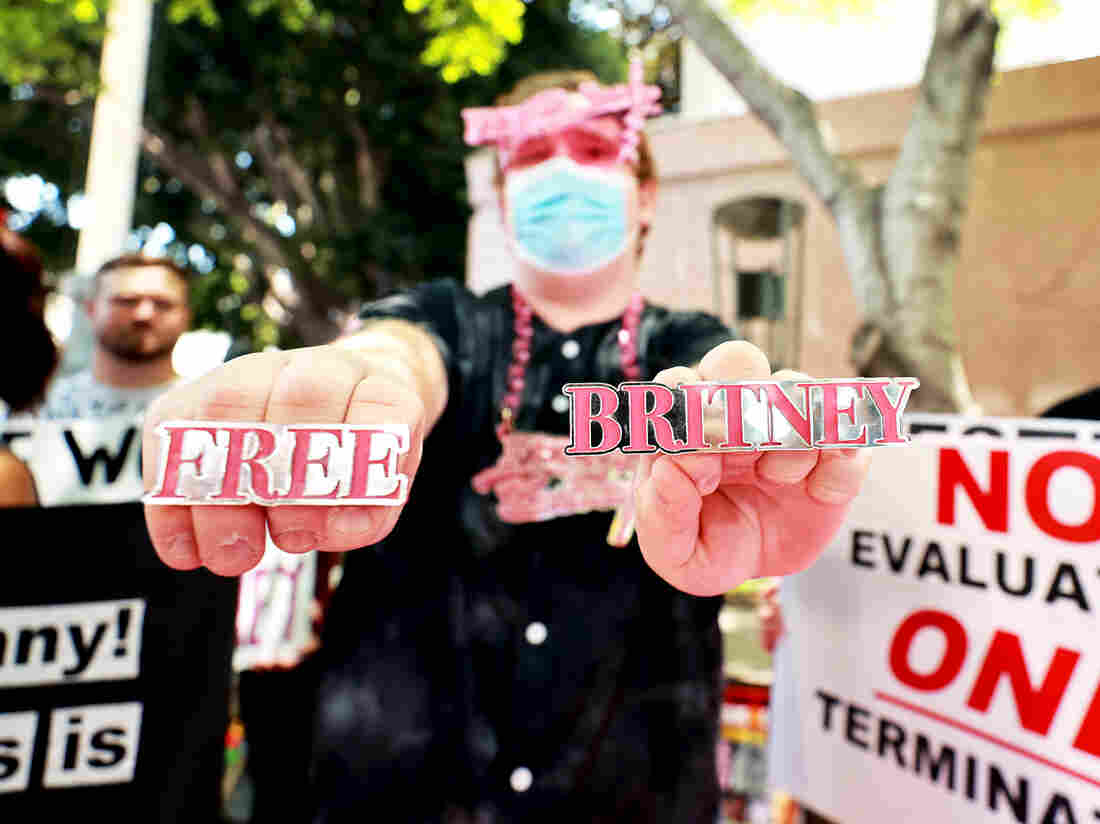 Protesters attend a #FreeBritney Rally at Stanley Mosk Courthouse on Wednesday in Los Angeles. The group is calling for an end to the 13-year conservatorship led by the pop star’s father, Jamie Spears, who has control over her finances and business dealings.

Britney Spears says that as long as her father is in charge of conservatorship, she will not be performing “anytime soon.”

Britney Spears made the declaration in the caption of a photo posted to her Instagram account. The artist also addressed people commenting on her videos that frequently feature Britney dancing to music in her home.

“For those of you who choose to criticize my dancing videos … look I’m not gonna be performing on any stages anytime soon with my dad handling what I wear, say, do, or think!!!!” she said in her post.

The artist went on to say that she’s performed the past 13 years under her conservatorship and was not allowed to add new songs or have direction of her shows.

“I’d much rather share videos YES from my living room instead of onstage in Vegas where some people were so far gone they couldn’t even shake my hand and I ended up getting a contact high from weed all the time … which I didn’t mind but it would have been nice to be able to go to the mother f***ing spa,” she wrote.

What Britney Spears said in her conservatorship hearing in June

Her post is the latest statement Spears has made regarding the ongoing legal battle over the conservatorship that’s been in place since 2008.

On June 23, Spears addressed a Los Angeles Superior Court judge asking for an end to the conservatorship that has removed almost all autonomy from her personal and professional life. Parts of the audio from her statement were leaked, including allegations that her team forced her to get an IUD and keep it in place despite her desire to have more children.

Spears also said that her handlers sought retribution after she said she didn’t want to do another show run in Las Vegas. She alleges they worked with her doctor to change her medication and forced her to go to a rehabilitation program in Beverly Hills.

Though Judge Brenda Penny denied Spears’ request to remove her father, Jamie Spears, from the conservatorship in June, Britney was given clearance to hire her own lawyer to represent her in the case. This came after her court-appointed attorney, Samuel D. Ingham III, requested to resign from the case.

Britney Spears’ new lawyer, Hollywood lawyer Mathew Rosengart, said during a hearing last week that he would file a petition to remove Jamie Spears from the conservatorship. The case is set to continue in September.

Her dad isn’t the only person Britney is frustrated with

In her post on Saturday, Britney went on to address other instances that have bothered her over the years, including her younger sister Jamie Lynn Spears performing Britney’s songs at award shows and the inclusion of “humiliating moments from the past” in documentaries. She also said she was hurt and let down by her support system.

“I don’t like that my sister showed up at an awards show and performed MY SONGS to remixes !!!!! My so-called support system hurt me deeply !!!! This conservatorship killed my dreams … so all I have is hope and hope is the only thing in this world that is very hard to kill … yet people still try !!!! I didn’t like the way the documentaries bring up humiliating moments from the past … I’m way past all that and have been for a long time !!!!”

Spears ended the post by saying that people didn’t have to follow her on the app and suggested reading a book as an alternative activity for those inclined to criticize her performances.