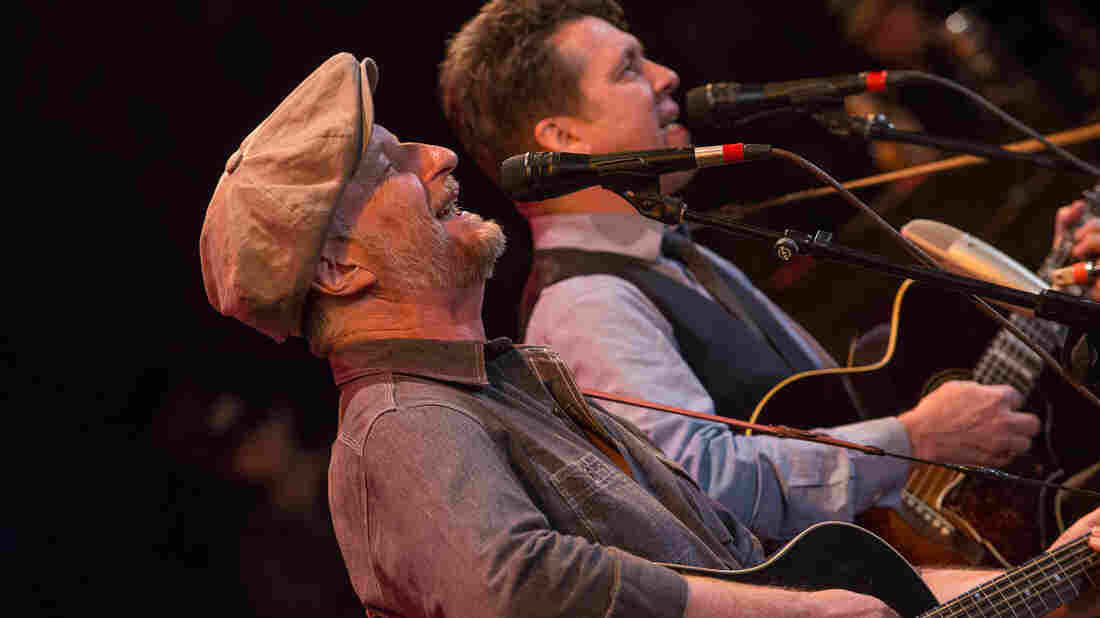 Though Bragg and Henry had already made multiple separate trips to Mountain Stage, this performance at Pitttsburgh’s Byham Theater defied space and time. The dynamic folk heroes came together like porters from the past carrying iconic songs from Shine a Light: Field Recordings from the Great American Railroad, recorded during a train ride from Chicago to Los Angeles.

Nominated for the 2017 Americana Music Award as duo/group of the year for their railway journey, they set forth straight away from the station sharing songs recorded on loading docks, compartments, cramped sleeping cars, platforms and depots across America.

“So we got on this train in Chicago and 3,000 miles and 65 hours later we had recorded 12 songs,” Bragg told the audience of their four-day slow roll to L.A. “Not all of the trains in these songs are a train that you are riding on. In American music the train is metaphorical and it is about loss and freedom and hope and aspirations.”

With their rough-hewn vocals pitching about as if they’d jumped out of a boxcar to sing around a sooty campfire, the duo moved the crowd cross country via “Railroad Bill,” “In the Pines” and a cover of the original field recording of “Rock Island Line,” made famous by Huddie Ledbetter or Lead Belly, who Henry said was their patron saint.

Tenderly, they shared one of Woody Guthrie’s favorite songs, Goebel Reeves’ “Hobo’s Lullaby.” Henry told the audience he and Bragg’s spirits first connected 30 years ago when they accidentally met in New York City bonding over a deep love of Guthrie.

In the midst of the seven-song set, Bragg shared a bit about their mobile recording process.

“We wanted to take people on a journey with us so we had two mics pointed outward to record our environment … so you get trains going by, people getting off and on the trains, and grackles attacking us in Fort Worth,” Bragg said before his baritone muscled up a mountain incline toward nothing but the Rockies and open sky for The Carter Family song, “Railroading on the Great Divide.”

The duo closed out swinging and shining a spirited light on the “Midnight Special,” a traditional song about the train of the same name, made famous in 1934 by Lead Belly, then an Angola Prison inmate, who knew the Texas-born song.

“At the Sugar Land Prison, the train comes out of the bottoms of the Brazos River and the light would sweep across the prison and if it would flicker through the windows of your cell, legend had it that you would be the next one getting paroled,” Bragg said. “That’s what they believed.”