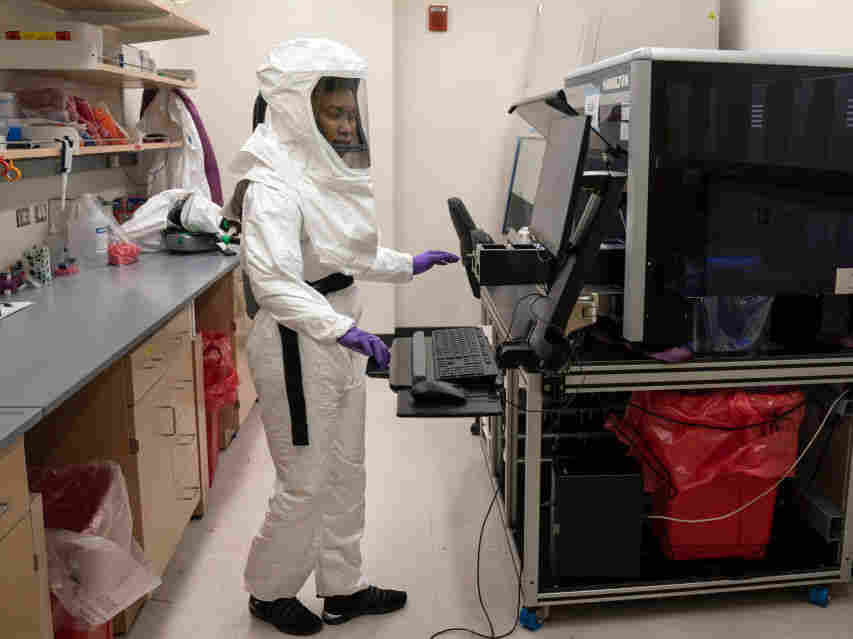 Lab Assistant Tammy Brown dons PPE in a lab where she works on preparing positive COVID tests for sequencing to discern variants that are rapidly spreading throughout the U.S. at the University of Maryland School of Medicine in Baltimore, Maryland.

The Biden administration will send $1.7 billion to the Centers for Disease Control and Prevention and local and state governments and other research efforts early next month to find and track coronavirus variants lurking in the U.S. Already, the more contagious UK variant B.1.1.7 is now the dominant strain in this country, fueling surges in Michigan and the Northeast.

“Our goal is to get that money out as fast as possible to help states in all the many ways that they need to be able to expand their own sequencing capacity,” said Carole Johnson, the White House COVID-19 testing coordinator, in an interview with NPR.

The U.S. has been flying blind in the race between vaccination efforts and the spread of new coronavirus variants that could potentially spark another deadly nationwide surge and reduce effectiveness of the vaccines. U.S. public health officials have been operating with incomplete information because of an inadequate viral genomics surveillance system.

Friday’s announcement details how the funds — which were part of the $1.9 trillion COVID-19 relief bill passed last month — will be distributed. The largest share of funds — $1 billion — will go to the CDC, states and cities to bolster their existing surveillance efforts.

The rest will go to longer-term initiatives, including $400 million to create “Innovative Centers of Excellence in Genomic Epidemiology” which will be research partnerships between state health departments and academic institutions. An additional $300 million will go to build a “national bioinformatics infrastructure” to handle the flood of data.

Before the coronavirus, genomic sequencing of viruses in the U.S. was aimed largely at tracking food-borne illnesses. The value of genomic sequencing was a “lesson learned” from COVID-19, said Johnson. The pandemic has forced that U.S. system to adapt and the funding approved by Congress should build up the scientific infrastructure to deal with whatever comes next, she added.

“This is both about today and about building for the long term,” said Johnson. “Today’s investment … is about helping us fight COVID but is also about helping us continue to transform how public health works to combat outbreaks of all kinds going forward.”

When the U.K. variant first emerged, the viral surveillance system in the U.S. was woefully under-resourced, especially compared to other countries. In early February, U.S. laboratories were only sequencing perhaps 5,000 to 8,000 coronavirus samples per week. The CDC says the agency has now boosted that to close to 15,000 per week. But many experts estimate the country should be sequencing at least 25,000 per week.

“The Biden plan makes sense and is practical,” Scott Becker, executive director of the Association of Public Health Laboratories, wrote in an email to NPR. Not only does it boost surveillance capacity, he says, but it also “looks towards building partnerships across sectors to foster innovations so that we can keep pace with science and technology. “

“What I was most worried about in the beginning of this process was that some new entity was going to be created that would analyze genomic information but would be not directly connected to CDC,” says Gigi Gronvall, a senior school at the Johns Hopkins University Center for Health Security. “That entity would probably fail but take a while and a lot of money with it in the process. This is the time to modernize and strengthen public health, and that begins with strengthening CDC.”

But some say even this boost in funding is not coming fast enough, especially with cases surging in many places and variants spreading quickly.

“With the money going out in May, I’d like to see a timeline of expectations for how quickly sequencing is going up,” says Heather Pierce, senior director for science policy at the Association of American Medical Colleges. “There is an urgent need to increase the sequencing by several fold in places where cases are high and rising (like Michigan), and a month or two ramp up period will put us behind where we needed to be months ago.”

Pierce noted that “one area that needs immediate attention is the sequencing of every “breakthrough” case,” which are cases in which people get infected even though they have been vaccinated. The CDC says at least 5,800 such “breakthrough infections” have been reported so far.

“We need to know whether infection after vaccination is the result of the vaccines, the variants, or some characteristic of the individuals who become infected,” Pierce wrote in an email to NPR.

Others say sequencing needs to be focused strategically.

“More is better — but in addition to random sampling we need to do targeted sequencing of hospitalized people, immune-compromised and previously vaccinated people,” says Mara Aspinall, a professor of medical practice expert at Arizona State University. “And we have to work globally on this issue.”

Some also say it’s important that these kinds of efforts continue to receive support going forward.

“For this to work, there will need to be sustained funding,” says Jennifer Nuzzo, a senior scholar at the Johns Hopkins Center for Health Security. “I am concerned about building up an infrastructure using emergency funds. We have seen over and over again that capacities require sustained investment.”