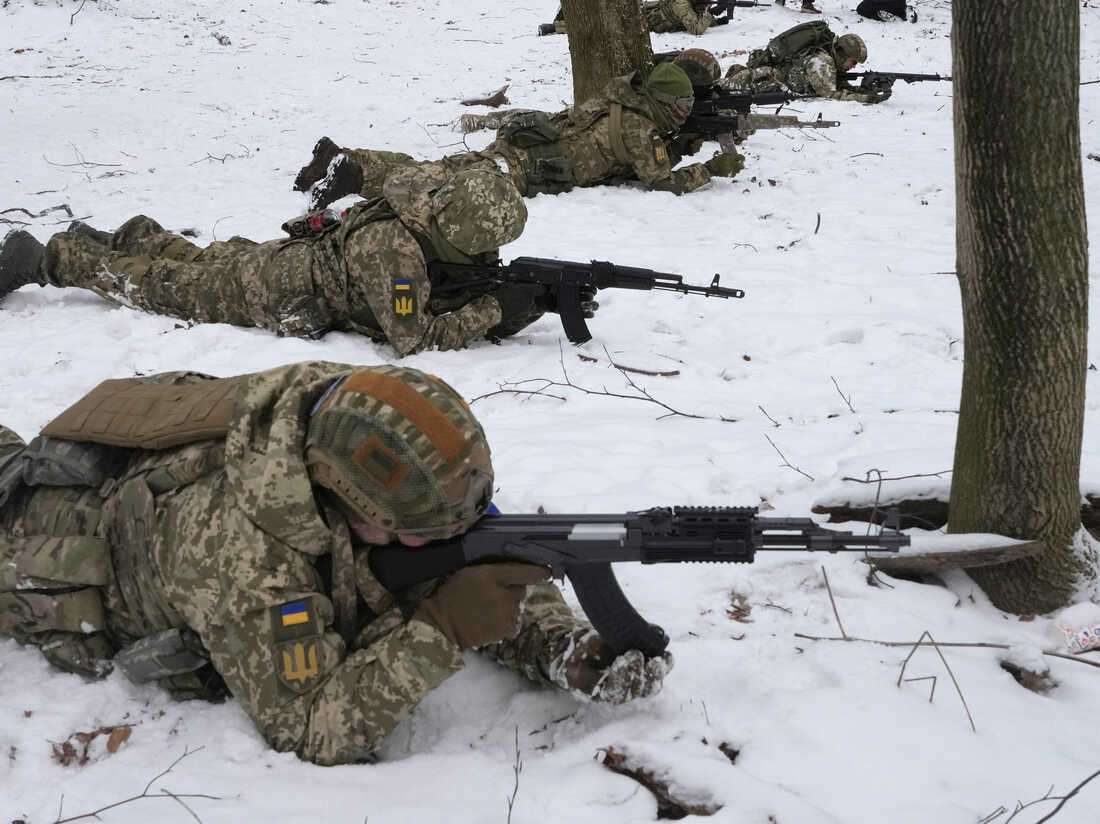 Members of Ukraine’s Territorial Defense Forces, volunteer military units of the Armed Forces, train in a city park in Kyiv. Tensions remain high between Ukraine and Russia as the United States and its NATO allies have tried to intervene diplomatically.

Continued tensions between Ukraine and Russia have led to the U.S. providing 90 tons of military aid that arrived in Ukraine, as roughly 100,000 Russian troops remain stationed along the border.

The shipment is part of the additional $200 million of “lethal aid” approved by President Biden in late December and includes ammunition for Ukraine’s frontline defenders, the U.S. Embassy in Kyiv tweeted. Overall, the U.S. has provided $650 million in defense equipment and services to Ukraine in the last year — the most it has ever given that country, according to the State Department.

“The United States and its allies and partners are standing together to expedite security assistance to Ukraine,” Secretary of State Antony Blinken said in a tweet on Friday. “We are utilizing all available security cooperation tools to help Ukraine bolster its defenses in the face of Russian aggression.”

And it comes after Blinken visited Kyiv and met with his Kremlin counterpart, Foreign Minister Sergey Lavrov, in Switzerland earlier this week.

“We didn’t expect any major breakthroughs to happen today,” Blinken said at a news conference following his meeting Friday with Lavrov in Geneva. “But I believe we are now on a clear path in terms of understanding each other’s concerns and each other’s positions.”

Russia has continued to insist on a written guarantee that Ukraine won’t join NATO. Blinken said he made the U.S. position clear, which is to “stand firmly with Ukraine in support of its sovereignty and territorial integrity.”

Blinken said that any military action on Russia’s side would “be met with swift, severe, and a united response from the United States and our partners and allies.” Russia has denied any intention of invading.

In his lengthy news conference Wednesday at the White House, Biden seemed to complicate the message from his own Secretary of State, saying that if Russia committed a “minor incursion” there might be a divide among NATO allies on how to respond to the aggression.

“I think what you’re going to see is that Russia will be held accountable if it invades. And it depends on what it does. It’s one thing if it’s a minor incursion and then we end up having a fight about what to do and not do,” Biden said.

Ukraine President Volodymyr Zelenskyy swiftly responded on Twitter saying, “We want to remind the great powers that there are no minor incursions and small nations.”

On Thursday, Biden clarified his stance saying any invasion would be met with a “severe and coordinated” economic response.

“If any — any — assembled Russian units move across the Ukrainian border, that is an invasion,” Biden said. “Let there be no doubt at all that if [Russian President Vladimir] Putin makes this choice, Russia will pay a heavy price.”

Blinken reiterated the president’s stance in a tweet Saturday, after a conversation with Canadian Foreign Minister Mélanie Joly.

“We remain committed to diplomacy but are ready, in coordination with NATO Allies and partners, to impose severe costs for further Russian aggression,” he said.