50 Years Of Sparks: The World Ain’t Big Enough For The Both Of Them 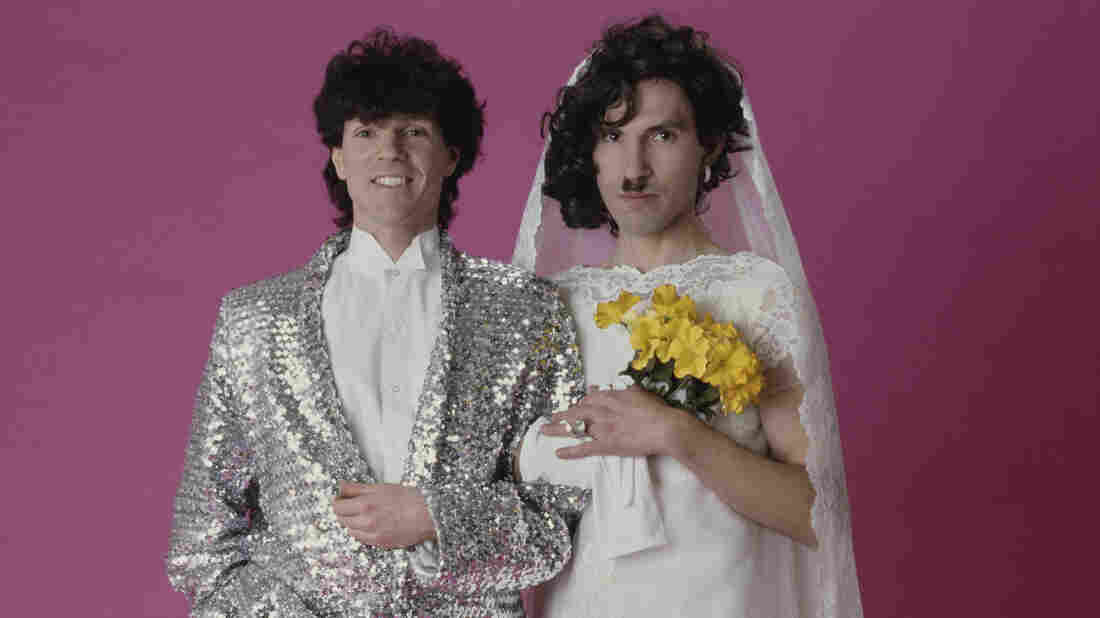 From left, Russell and Ron Mael, who record as Sparks, photographed in 1982 during the cover shoot for their album Angst In My Pants.

The band Sparks – really a duo, of L.A.-born brothers Russell and Ron Mael – is marking its fifth decade as a living enigma this year. As director Edgar Wright wonders in his new documentary, The Sparks Brothers: “How can Ron and Russell Mael be successful, underrated, hugely influential and overlooked, all at the same time?” (You can hear my review of the film in the audio player above.)

The pair has long been celebrated from L.A. to London, Paris to Tokyo. And there’s no shortage of reverence for the group from its musical descendants, too: “All pop music is rearranged Sparks,” Grammy-winning producer Jack Antonoff, who has worked with Lorde and Taylor Swift, says in the film.

And yet, you say you can’t place the name? Can’t quite hear a song of theirs in your head? As beloved as the Maels are, you’re not alone. But let’s fix that. We don’t have the time to explore all of their 24 full-length albums, so instead, below, are seven spectacular Sparks songs to help get you acquainted.

When the Mael Brothers sang this tune on Britain’s Top of the Pops in 1969, they caused a sensation, mostly because of Ron’s toothbrush mustache, which could be charitably characterized as Chaplinesque. Appearing on a talk show the next day, actress Shelley Winters said “there was somebody dressed like Hitler playing piano on the BBC.” Pete Townshend, of The Who, set her straight: “He was born looking like Hitler, actually.”

From their second album, produced by Todd Rundgren – who said of his 1960s search for new talent that it was “sometimes like butterfly hunting. You’re looking for some species that nobody has ever discovered before.” Sparks definitely qualified.

This title song from their eleventh album was used in the 1983 romantic comedy Valley Girl, which starred Nicolas Cage and Deborah Foreman, and was loosely based on Romeo & Juliet… well, very loosely, as Shakespeare’s version wasn’t a romantic comedy.

When Kiss turned the gig down, Sparks got tapped to play the theme park ride’s opening concert in the 1977 Sensurround disaster flick (and general all-around disaster) Rollercoaster. A wildly overenthusiastic crowd’s onscreen reaction notwithstanding, they later mentioned that appearance when asked about their biggest career regrets.

“The Number One Song in Heaven” from the album No. 1 in Heaven

A hit in the U.K. in 1979, this song was released as a single, produced and co-written by Italian electronic composer, godfather of disco and recent Daft Punk collaborator Giorgio Moroder.

An electronic-dance riff on Frank Sinatra’s signature tune “My Way,” this was a minor hit single in 1994 – and sports a ridiculously fun, noirish goof on the “backstage saga” films of the ’40s.

“So May We Start” from the movie Annette

As lovers of experimental cinema, the Mael brothers spent years collaborating on projects with filmmakers Jacques Tati and Tim Burton, only to have them fall through. But this song was just released, coming from a film musical starring Adam Driver and Marion Cotillard, directed by Leos Carax and set to premiere at the Cannes Film Festival on July 6 – with a score by Sparks.