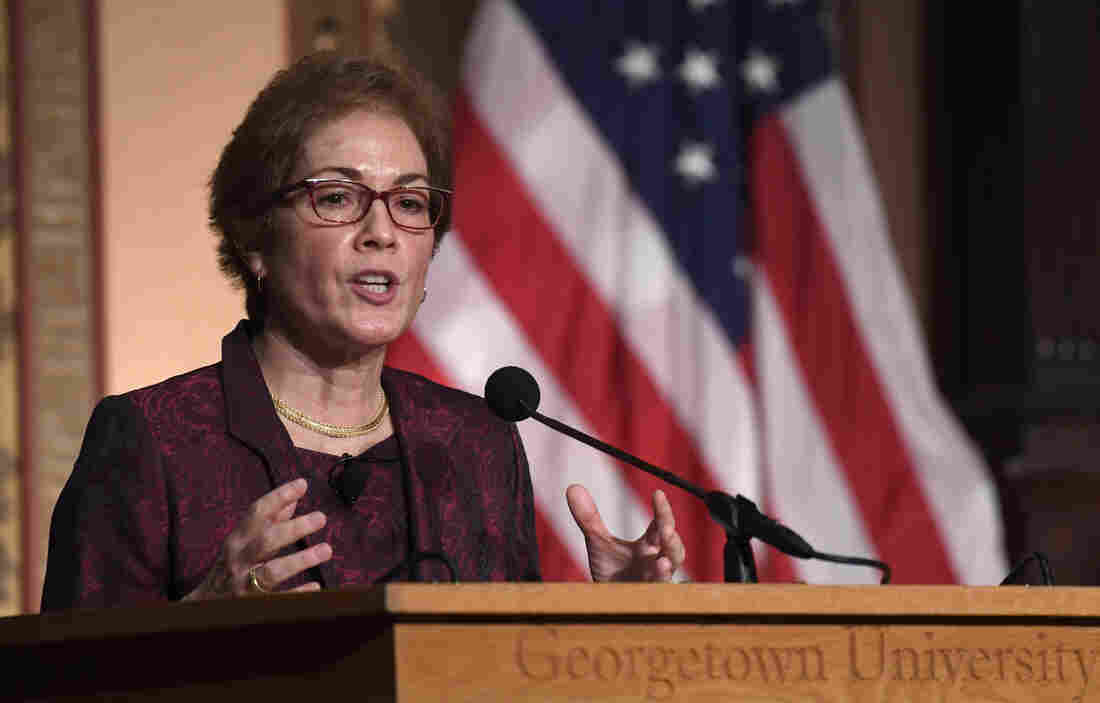 Former U.S. Ambassador to Ukraine Marie Yovanovitch speaks at Georgetown University on Wednesday, where she received the Trainor Award for excellence in diplomacy.

Marie Yovanovitch, the former U.S. ambassador to Ukraine removed from her post under orders from President Trump, says the State Department “is in trouble.”

When she was introduced, Yovanovitch received a lengthy standing ovation from an audience that included students and fellow former diplomats. It was her first public appearance since she retired from the State Department on Jan. 31 — three months after she testified before Congress during the impeachment inquiry into Trump.

Trump recalled Yovanovitch from her post last spring, after his personal attorney Rudy Giuliani and associates claimed, without evidence, that she was badmouthing the president. Trump called her “bad news” and told Ukraine’s president in their infamous July 25 phone call, “She’s going to go through some things.”

Yovanovitch was at Georgetown to receive the Trainor Award for excellence in diplomacy, given by the university’s Institute for the Study of Diplomacy. She told the gathering that under the Trump administration, “The policy process has been replaced by decisions emanating from the top, with little discussion.”

“To be blunt, an amoral, keep-’em-guessing foreign policy that substitutes threats, fear and confusion for trust cannot work over the long haul,” said Yovanovitch, clearly hinting at Trump while not naming him.

An immigrant and the daughter of refugees who fled the turmoil of post-war Europe, Yovanovitch began her career during the Cold War. “The world that we knew then was shaped by World War II, the rise of Soviet communism and the framework that we put in place to manage all those challenges.”

After the collapse of communism, she served among the ranks of American diplomats who promoted the promise of democracy and capitalism in the post-Soviet world. She rose through the foreign service to become ambassador to Kyrgyzstan and Armenia and, finally, the top U.S. diplomat in Ukraine.

In her remarks at Georgetown, the three-time ambassador said the end of communism, “doesn’t feel like the end of history as some had promised.” She cited new challenges, from terrorism to global warming, disinformation and the “tensions between a globalizing world and a trending nativism.”

She acknowledged the old certainties no longer hold.

“The creaking sound we can all hear? That’s the sound of institutions of the international order straining under the tremendous pressure they’ve been put under,” she said.

Those institutions need a “reboot, not the boot,” she added.

Yovanovitch, a career foreign service officer who did not seek the limelight, became a household name because of her role in the impeachment drama. In her testimony last fall before the House Intelligence Committee, she traced the smear campaign against her to individuals who, she said, “apparently felt stymied by our efforts to promote the stated U.S. policy against corruption.”

Giuliani and other Trump allies had accused Yovanovitch of trying to block investigations into former Vice President Joe Biden and his son Hunter.

While acknowledging the staffing problems, budget cuts and low morale at the State Department, Yovanovitch nonetheless urged students in her Georgetown audience to consider a career in the foreign service. She said she took heart from former Secretary of State Colin Powell, whom she quoted as saying that “optimism is a force multiplier.”

“America,” she said, “needs public servants in diplomats when times are great. We need them even more when there are challenges.”