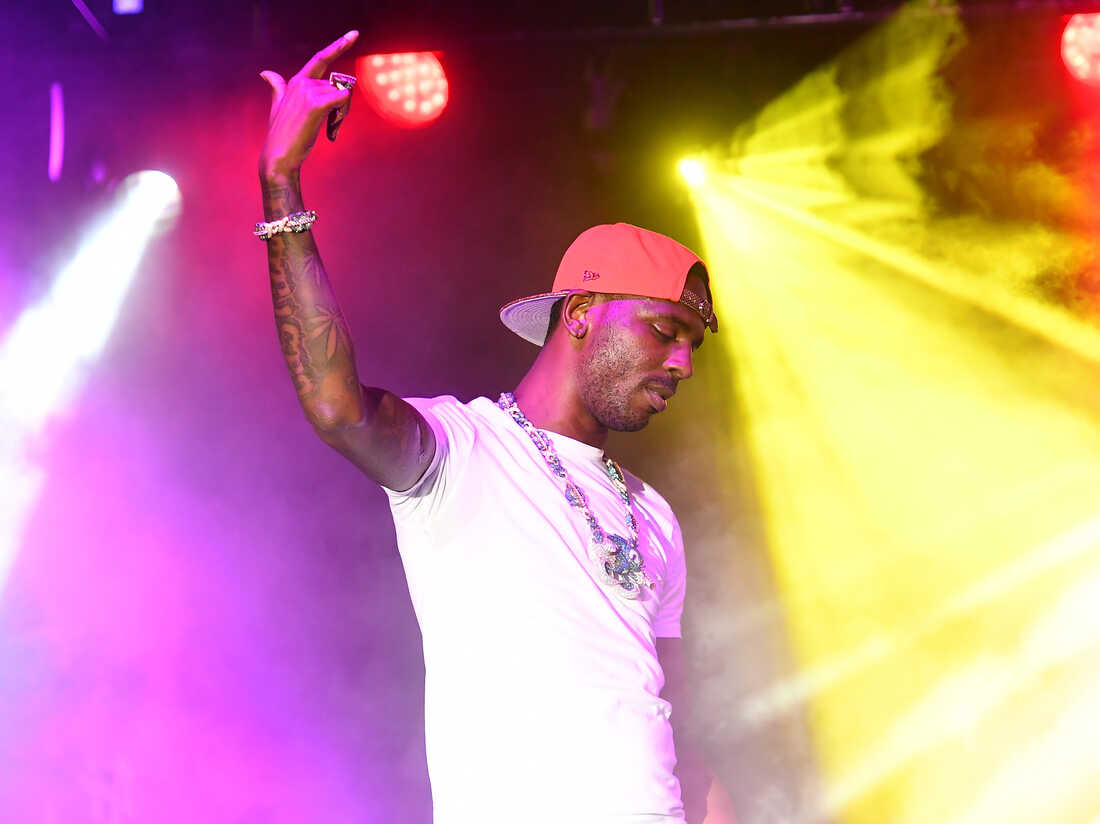 In the ways he memorialized his own family and held up his city, Dolph demonstrated his understanding of people as more than the sum of our generosity or our flaws.

By all accounts, including his own, it’s a miracle that Young Dolph lived to see 2021. “I’ve been targeted since I was 17, 18, 19,” he told The Guardian in 2018. The rapper, whose real name was Adolph Robert Thornton Jr., was 36 when he was fatally shot at a cookie shop in his native Memphis last week. He left behind two kids, a longtime girlfriend and a city struggling to cope with the loss of one of its biggest rap stars. An artist known as much for his unflinching lyrics about his near-death experiences as he was for his sense of humor, and an altruistic relationship to collaborators and fans, Young Dolph understood people were not the sum of their good deeds or public beefs. He saw the full humanity in himself and others, and demanded listeners do the same.

Dolph, a flashy rapper who loved designer clothes, luxury cars and hilarious punchlines almost as much as he loved the city of Memphis, was in an era of his career defined by his non-stop work ethic and his passion for helping rising rappers. The rapper released his official debut album King of Memphis in 2016, although he’d already gained a following from his prolific mixtapes and collaborations with Southern rappers like 2 Chainz. He quickly emerged as a consistent, prominent voice in the lineage of Memphis rap.

He collaborated with the likes of Gucci Mane and Megan Thee Stallion, as well as Memphis legends Juicy J and Project Pat, and achieved mainstream success — his last solo album, 2020’s Rich Slave, peaked at No. 4 on the Billboard 200. But all the while he maintained an approachable persona. His raps provided an unfiltered look into growing up Black and impoverished in the South, but they were also unpretentious and accessible. Dolph wasn’t afraid to punctuate a bar with a joke, leaning into absurdity as much as he leaned into reality. “Came out my momma, doctor smacked my a**, I ain’t start crying, looked at him and said n**** get paid,” he rapped on “Rich Slave.”

But Dolph was more than just a celebrated rap collaborator, as he worked to uplift and help younger artists navigate an opaque industry. Refusing to sign to a major label, Dolph released music through his own Paper Route Empire via a distribution deal with Empire, and regularly bragged about his ability to achieve national fame independently. It was a path he wanted other rappers to follow, including his most famous protégé fellow Memphis rapper Key Glock. The pair notably traded jokes in interviews, and tag teamed verses on the joint albums Dum and Dummer (2019)and Dum and Dummer 2 (2021). It wasn’t uncommon for Dolph to rent a house in Los Angeles, far away from the drama of his hometown, and invite all of his artists and a team of producers to record music. One result of those group studio sessions was Paper Route Illuminati, the last project Dolph released before his death. “I put ice on everybody around me just to see them shining,” Dolph raps on the opening track “Talking To My Scale” before ceding the spotlight to his roster of Paper Route Empire signees for much of the 23-song compilation.

At 36, Young Dolph seemed to be hitting his stride as an artist balancing being a businessman. A father with a passion for hosting an annual turkey drive in Memphis, he seemed far removed from the dangers he’d previously faced. Looking back at the beginning of his career, though, it’s hard to find coverage of the rapper that didn’t grapple with his rap beefs or the ways in which he seemed imperishable. In 2017 alone, Dolph had been shot and shot at, each incident only strengthening the myth that he was unkillable. Dolph, it seemed, was surrounded by spiritual forces that wanted him alive more than his enemies wanted him dead. Even if his song “100 shots” was an exaggeration of the incident where the rapper’s car was shot at, that was hardly the point. With lyrics like “They don’t want you to live, they don’t want you to ball,” the song became an anthem for anyone who’d ever felt like they’d been unfairly doubted or plotted against.

In hindsight, it’s the video for “Believe Me” that’s hardest to watch. After being shot in Los Angeles, the rapper recorded a video inside his hospital room, his arm still in a sling. The video, with its ominous flashes of white light and close-up shots of IV fluid bags, turned violence into a celebration of life. In the end of the video, Dolph leaves the hospital smiling, and the video turns to shots of him spending time in a mansion with his son. “We live life and we have [had] some bumps in the road,” Dolph’s co-manager, Jeremel “Daddyo” Moore, told me in a 2019 interview following the shooting, “but now the road feels like it’s smooth.”

In 2019, I profiled Young Dolph for XXL‘s summer issue. It took more than a month for me to finally get on the rapper’s schedule, because he was constantly on the road. At one point my editor and I turned it into a joke, watching as he posted on Instagram from another city each day. Typically I’d be a bit annoyed, especially with my deadline quickly approaching, but I was legitimately happy to see how much fun he seemed to be having. After a series of near-fatal incidents, he seemed to be settling into a new phase of his career and life. When we finally met, we only spent about an hour together but I left the interview struck by his sincerity and the care he had for his loved ones. Sitting in a studio chair, the lanky rapper smoked a blunt while candidly discussing the highs and lows of his life. Dolph, a rapper who was given every reason to be hardened by the circumstances of life, told me he felt “blessed.” It was a sentiment he’d learned from his father at a young age.

Born to two crack-addicted parents, Dolph recalled growing up amid poverty and trauma. Despite this, he credited both his parents and the grandmother who raised him with preparing him for life. Often referring to himself as a “rich crack baby” on songs, the rapper flipped a pejorative that is often used to stigmatize Black mothers struggling with substance use and their kids into a badge of endurance. “Rich crack baby, momma and daddy both used to smoke rocks,” he rapped on 2018’s “Black Queen.” “Rich crack baby, now I’m smoking kush with my mom and daddy on a yacht.” The ode to his mother wasn’t the only time he celebrated her or his grandmother, whom he credited with raising him and making sure he graduated high school.

In person and in his music, he was always clear that his elder’s shortcomings were a result of systemic, not individual failings and refused to demonize them for any of their choices. In our interview, he told me he knew his family wasn’t unique – there were plenty of other Black families who struggled with the same hardships. He made music in hopes of motivating those people.

“My dad used to always tell me when we [were] little, like real little, ‘I’m rich,'” he told me at the time. “I’m knowing we f***** up. But he [telling] me, ‘I’m rich. It ain’t about money. I’m rich in spirit. I got a job, got my kids.’ It’s like, s***, he wasn’t complaining. It is what it is and he was dealing with it. [My parents] always kept me grounded.” Interludes on the album Rich Slave feature recordings of Dolph talking to a longtime friend of his father. At one point, his father’s friend pauses the conversation to ask the rapper if he’s staying safe in Memphis. “Hell yeah,” Dolph responds, before turning the conversation back to tales of the city. Listening back to that brief moment in the wake of his death is painful because Dolph sounds so carefree and confident, his Memphis accent on full display as his typically deep voice gives way to light, full-throated laughter. He’s fascinated by the stories he’s hearing and fixated on his family’s past, unaware of the fact that his own time is running out.

I’ve been thinking about my chat with Dolph, especially our time speaking about his family, a lot since his death. As videos of Dolph doing good deeds for fans began to resurface on social media in the days following his death — one in which he gifts a Lamborghini to a fan, and another showing him hand over $20,000 to two others — I kept thinking about what the rapper said when I asked him about these kind gestures back in 2019. “I just thought that’s what you’re supposed to do,” he told me. “I was raised like that.”

Young Dolph wasn’t without his shortcomings. Like many straight men in music, his lyrics were sometimes misogynistic and homophobic. Perhaps, if he had lived longer he would’ve continued to evolve, or maybe not. The worth of a human life shouldn’t be determined by whether or not they’re giving away Thanksgiving turkeys every year or the industry beef they’ve indulged in. In the ways he memorialized his own family and held up his city, Dolph demonstrated his understanding of people as more than the sum of our generosity or our flaws. He left behind plenty of music to help others learn that lesson too.