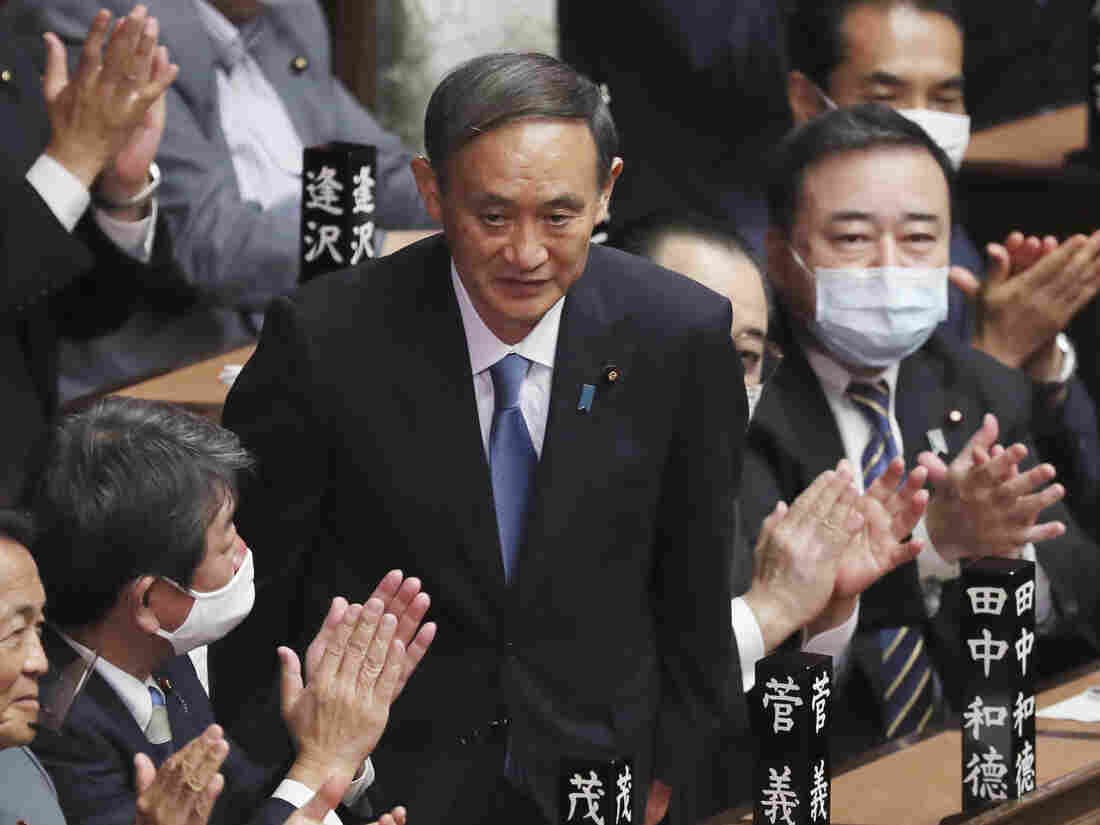 Suga, 71, was sworn in by Emperor Naruhito at the Imperial Palace after parliament elected him as prime minister.

Suga was Abe’s chief Cabinet secretary and head government spokesman. Now he pledges to forge ahead with his predecessor’s key policies, including his efforts to jump-start the economy and to revise Japan’s postwar constitution, which restricts the use of its military.

“Reviving the economy remains the top priority of the administration,” Suga told reporters in a news conference after becoming prime minister.

But in an earlier briefing Monday, Suga said he envisioned a society in which the Japanese first help themselves and each other before accepting government assistance. Those remarks drew some criticism that Suga’s administration might turn its back on society’s poor and vulnerable.

Suga also vows to maintain the alliance with the United States as the cornerstone of Japan’s foreign policy.

He takes office at a time when Japan is managing the coronavirus outbreak and planning for the Tokyo Olympics that were delayed because of the pandemic. Japan also faces a difficult security environment and is increasingly vulnerable to North Korean and Chinese missiles.

He has kept key Cabinet members in place, with some minor reshuffling. “We will create a Cabinet that works for the people,” Suga said.

Continuity weighs on Japanese minds as, before Abe’s record tenure, the country went through six prime ministers in six years. That included a one-year term by Abe that was cut short by the same chronic bowel ailment he says has forced his retirement now.

On Monday, after being chosen to lead the governing Liberal Democratic Party, Suga introduced himself to reporters as the eldest son of farmers in Akita prefecture. Japan’s Kyodo News service reported that his father also worked on railways in Manchukuo, a puppet state of the Japanese Empire in northeast China before and during World War II.

Without being born with ties to power, Suga said, he had to “jump into politics and start from scratch.”

After a couple of jobs, including at a cardboard factory and a fish market, he became a lawmaker’s secretary and later a city assemblyman in the port city of Yokohama.

By contrast, Abe, 65, was a political blue blood and the grandson of Prime Minister Nobusuke Kishi.

“As a politician, I don’t think his humble background is an issue now,” Shihoko Goto, a Japan expert at the Wilson Center in Washington, D.C., said of Suga. “He is a consummate political operative, and so he should be able to continue to garner support for himself.”

Suga does not belong to any of the powerful internal factions in the Liberal Democratic Party, which he has said have “harmful effects.” Nevertheless, the major factions eventually lined up behind him, leading to his selection as Abe’s successor.

Suga is largely seen as an effective, if uncharismatic, politician. As chief Cabinet secretary, Suga kept the bureaucrats in Kasumigaseki, the Tokyo district that is home to Japan’s ministries, in line.

And as the government’s chief spokesman, he kept the press in check, parrying questions from journalists about a string of cronyism scandals that plagued Abe.

“We must correct what we find objectively wrong,” he responded tersely this week when reporters asked about the controversies.

He has also hinted at new initiatives. He has expressed a willingness to meet with North Korean leader Kim Jong Un and to resolve the issue of Japanese nationals abducted by that country. He has spoken of plans to launch a government agency to digitize the bureaucracy’s notoriously paper-bound workflow.

Now he needs to show he has the public’s support by winning a general election. By law, that vote must be held by September 2021. Holding it sooner could give him a quick political boost, but the current epidemic could make that difficult.

Suga faces the task of reversing difficult, long-term trends for Japan. Abe was only able to achieve modest economic growth after decades of stagnation. Abe’s progress in building the military could not stop the country’s eclipse by China as Asia’s dominant military power.

Some observers question whether Suga or any Japanese leader can achieve robust economic growth in a country struggling under massive public debt and a rapidly shrinking and aging population.

Some experts propose a “post-growth” model in which Japan abandons its pursuit of gross domestic product figures, bullet trains and aircraft carriers, and instead emphasizes quality of life and environmental sustainability. But Suga and Abe are clearly no fans of this approach.

Besides, said the Wilson Center’s Goto, while many Japanese may not be happy with Japan’s current economic malaise, they look at other countries and realize “it actually is a lot better than a lot of alternatives out there, and so there is a lot of support for staying the course.”

Chie Kobayashi contributed to this report from Tokyo.