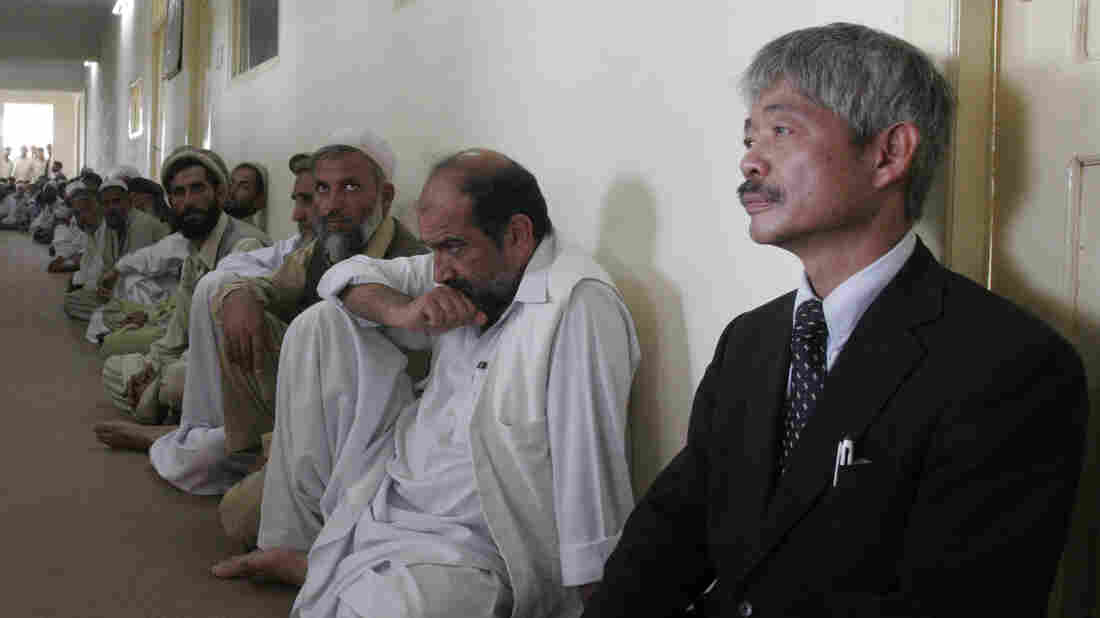 Tetsu Nakamura, right, pictured in 2008 during a memorial service for a slain aid worker. The Japanese doctor was among six gunned down in an attack Wednesday in the eastern Afghan city of Jalalabad.

A prominent Japanese doctor who devoted his life to providing aid in Afghanistan was killed by unknown gunmen on Wednesday along with five Afghan colleagues. It’s the second attack on aid workers in the country in recent weeks.

Officials said Tetsu Nakamura, 73, was attacked while riding an aid vehicle in the eastern Afghan city of Jalalabad. He died of his wounds while he was being airlifted to a base for emergency care.

So far, there has been no immediate claim of responsibility for the attack. The Taliban denied involvement; ISIS is also active in the area.

Nakamura had recently been awarded honorary Afghan citizenship for his humanitarian work in the region, according to local officials. He headed the aid group Peace Japan Medical Services and served rural communities by providing health care and improving agriculture through irrigation projects.

The slaying of the native of Fukuoka, Japan, prompted an outpouring of grief from friends, colleagues and government officials. Many shared images of his work in the region on social media .

“Dr. Nakamura dedicated many years of his life in serving the needs of thousands of people by committing his precious time, energy and passion to turning a vast area of barren land into a green biologically productive, and henceforth bringing livelihood to the people of the region,” an Afghan Ministry of Foreign Affairs statement said Wednesday.

Nakamura first arrived in the region in 1984, when he began working in the Leprosy Ward of a Pakistani hospital. Several years later, after opening a clinic in Afghanistan, he identified malnourishment as the root cause behind his patients’ health issues. This prompted his NGO to shift focus to building canal projects.

Locals credited Nakamura with transforming vast areas of desert into fertile farming land. He said on a Japanese public broadcast show that he found inspiration in the teachings of ancient Buddhist philosophy.

“Light up your corner of the world,” Nakamura told NHK’s OnDemand. “These were the words of Saichō, a Japanese Buddhist monk who lived over a thousand years ago, when he pondered the question of national treasures. He said that it wasn’t about trying to save every single person in the world or trying to make the whole world prosper.”

Nangarhar residents hold a candlelight vigil for Dr. Nakamura, who spent more than three decades improving Afghan lives — murdered at 73 years old as he was driving to work in Jalalabad city along with his five Afghan colleagues. pic.twitter.com/CUKt2ulOFV

Wednesday’s attack is the latest killing of Afghanistan-based aid workers in recent weeks. A United Nations vehicle was heavily damaged by a bombing in late November, wounding five and killing one American worker.

Paolo Zialcita is an intern on NPR’s Newsdesk.