What Does It Take For A Palestinian American Baby To Travel From Israel To The U.S.? 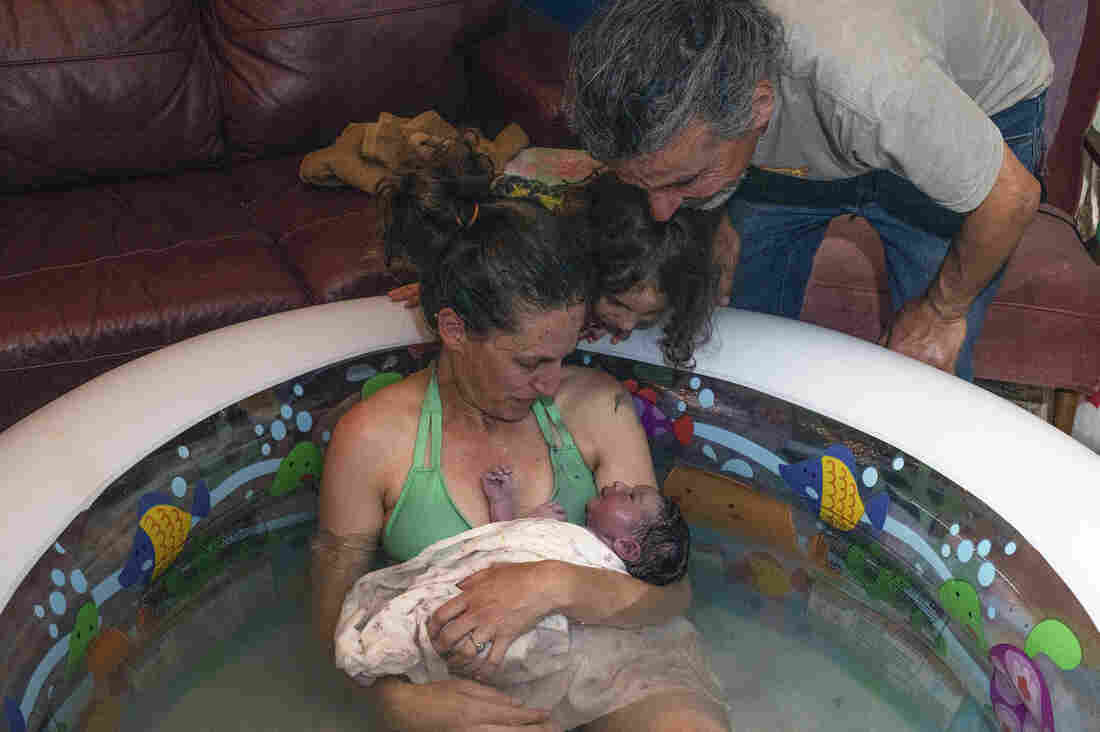 Morgan Cooper holds newborn Lourice as her husband Saleh Totah and 4-year-old son look on. Lourice was delivered in June in a home birth in an inflatable swimming pool in the family’s home in the West Bank city of Ramallah. They planned to travel to the U.S. but faced bureaucratic obstacles.

This summer, California native Morgan Cooper delivered a healthy baby girl at the home she shares with her Palestinian American husband Saleh Totah in the West Bank city of Ramallah. But according to Israel, which occupies the West Bank, their baby Lourice did not officially exist.

Since Israel occupied the Palestinian territories in 1967, Israel has kept track of their population. Now an estimated 70,000 newborns aren’t in Israel’s registry, and Israeli border authorities will not let them leave.

So Lourice, her parents and her four-year-old brother — all of whom are American citizens — are trapped in the West Bank. They want to visit Lourice’s uncle in New York, who is using an oxygen tank after surgeries and complications from COVID-19, and Lourice’s grandparents in California, who evacuated their home during the wildfires and are in poor health.

Lourice’s parents, who run a popular Ramallah café with a clientele of journalists and diplomats, had Sen. Kamala Harris’s office and other Congressional offices plead their case to Israeli authorities. Only after NPR’s correspondent and another reporter made inquiries did Israeli authorities grant Lourice permission to travel to the U.S.

Just one other Palestinian American baby received travel permission after an Israeli lawmaker intervened and Israeli media covered the story. But tens of thousands of other babies remain stuck between a Palestinian boycott campaign and the latest Israeli limitation on Palestinians’ freedom of movement.

“We don’t have our rights. We don’t control our borders,” says Totah. “It’s a mess.”

“A baby shouldn’t be held hostage” 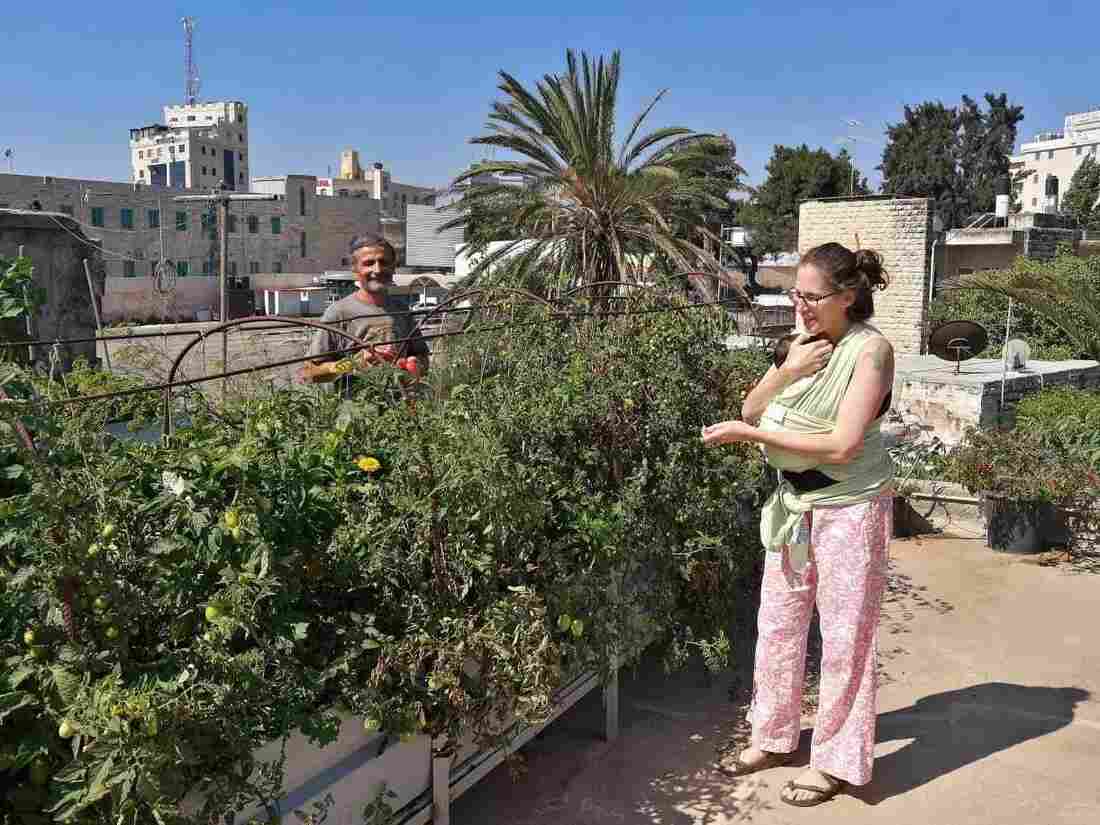 Morgan Cooper holds Lourice a week after she was born, as she and her husband Saleh Totah (left) tend to the rooftop organic garden of their cafe in the West Bank city of Ramallah.

About 35,000 newborns in the West Bank and another 35,000 in Gaza have not been registered with Israel since the Palestinian boycott began in May and cannot travel abroad, says the Palestinian Authority’s Deputy Interior Minister Yousef Harb.

The Palestinian Authority halted security and civilian cooperation with Israel in order to challenge the Oslo peace accords of the early 1990s. Those agreements gave Palestinians semi-autonomy and were supposed to lead to Palestinian self-determination, but failed attempts at a final peace deal, frequent violence and expanded Israeli control over the West Bank have left the Palestinian Authority administration subservient to Israel.

The boycott appears aimed at pressuring Israel for political concessions, but average Palestinians are suffering the consequences. The refusal to accept cash from Israel has left tens of thousands of Palestinian civil servants without pay, deepening an economic crisis.

Israel has created new bureaucratic channels to skirt the boycott and grant Palestinians work permits and Israeli hospital care. But the Israeli defense body that handles Palestinian civilian affairs will not budge from the Oslo agreement that makes the Palestinian Authority responsible for recording births and reporting them to Israel.

“As part of the agreement, for the purpose of synchronizing the Israeli information systems and in order to make certain services available to Palestinian residents, the Palestinian Authority must update the appropriate offices in Israel regarding every change in the population registry,” COGAT, short for Coordination of Government Activities in the Territories, said in a text message to NPR.

Few Palestinians are traveling during the pandemic, but about 30 have appealed to the Israeli legal aid group HaMoked to help them leave with their newborns. HaMoked has petitioned Israel’s West Bank military commander and a court.

“A baby shouldn’t be held hostage to these power games between Israel and the Palestinian Authority,” says Jessica Montell, HaMoked’s executive director.

Baby Lourice’s saga began on June 11, the day she was born in an inflatable swimming pool in her parents’ living room with the help of a secret Israeli midwife.

Home births are not allowed under Palestinian law, so Lourice’s parents spent two months persuading Palestinian officials to issue a birth certificate. They had to admit they smuggled the midwife to their home in the West Bank, where Israelis are not allowed, and submitted video evidence of the birth to prove they had not stolen another mother’s child.

“I said to them at one point, ‘The Israelis are usually the reason we struggle. Now it’s you denying,'” said Cooper. “That is what got them rolling to do the paperwork.”

Once Lourice’s Palestinian birth certificate was issued, the U.S. Embassy in Jerusalem issued her a U.S. passport. Amid COVID-19 lockdowns, Lourice’s parents closed their Ramallah café, La Vie, and prepared to fly to the U.S.

Foreign citizens like Cooper are usually allowed to fly out of Israel’s international airport with their children, but not with their Palestinian spouses. Israel applies travel restrictions to Palestinian residents of the West Bank regardless of the foreign passports they may also hold. Arab Americans have long accused the U.S. of not sufficiently pressing Israel to change this practice.

Israel granted exceptions, however, when the pandemic shut the airport in neighboring Jordan, where Palestinians usually can travel from.

On Sept. 9, COGAT, the Israeli agency that coordinates with the Palestinian Authority, directed Lourice’s Palestinian-born father, Totah, to ask the Palestinian Ministry of Civil Affairs to submit the travel request to Israel. That same day, Totah rushed to the ministry office, where he says a security guard told him, “Nobody works here anymore.”

“There should be an easy solution”

Meanwhile, there was the problem of baby Lourice. She holds a U.S. passport, but would be blocked from leaving the country just like any other Palestinian newborn.

Cooper could have lobbied Palestinian officials to transfer Lourice’s birth certificate to Israel. But she was sympathetic to their boycott.

“They are doing it in protest of annexation of their entire state,” she says. “That’s much, much bigger than my family’s own situation.”

So Cooper instead asked the U.S. Embassy in Jerusalem to petition Israel to let Lourice travel on her U.S. passport. Cooper says the embassy offered generic and contradictory responses.

The U.S. nonprofit Rebuilding Alliance was optimistic it could help untie the knot. The group advocates for the rights of Palestinians and last year persuaded members of Congress to help more than a dozen Palestinians from the West Bank and Gaza travel abroad.

“Those babies are American babies… there should be an easy solution here,” said Donna Baranski-Walker of Rebuilding Alliance.

The group helped Cooper appeal to her Congressional representatives in California: Senators Dianne Feinstein and Kamala Harris, now the Democratic vice presidential nominee, and Rep. Doug LaMalfa. She also enlisted the help of three members of Congress from New York, where Totah has residency.

In correspondence viewed by NPR, the U.S. Embassy told Harris’ Senate office it had requested clarification from Israeli officials “but would not be able to guarantee an immediate and favorable outcome.”

Harris’ office told Cooper by email it could not help further because “the Government of Israel has jurisdiction over this matter and our Senate office has no influence on their laws or regulations.”

HaMoked’s Montell says the U.S. Embassy has been “spectacularly unhelpful” in such cases.

Finally, after an inquiry Tuesday from NPR, Israeli officials invited Cooper to submit a special request to register her baby with Israel. The next day, an Israeli journalist delivered baby Lourice’s Palestinian documents to COGAT, the Israeli coordinating agency. Hours later, her travel permit was ready.

It came too late.

As Cooper’s husband was still awaiting an Israeli airport permit, Israel banned all outbound flight purchases Friday, in a new pandemic lockdown no one knows how long will last.