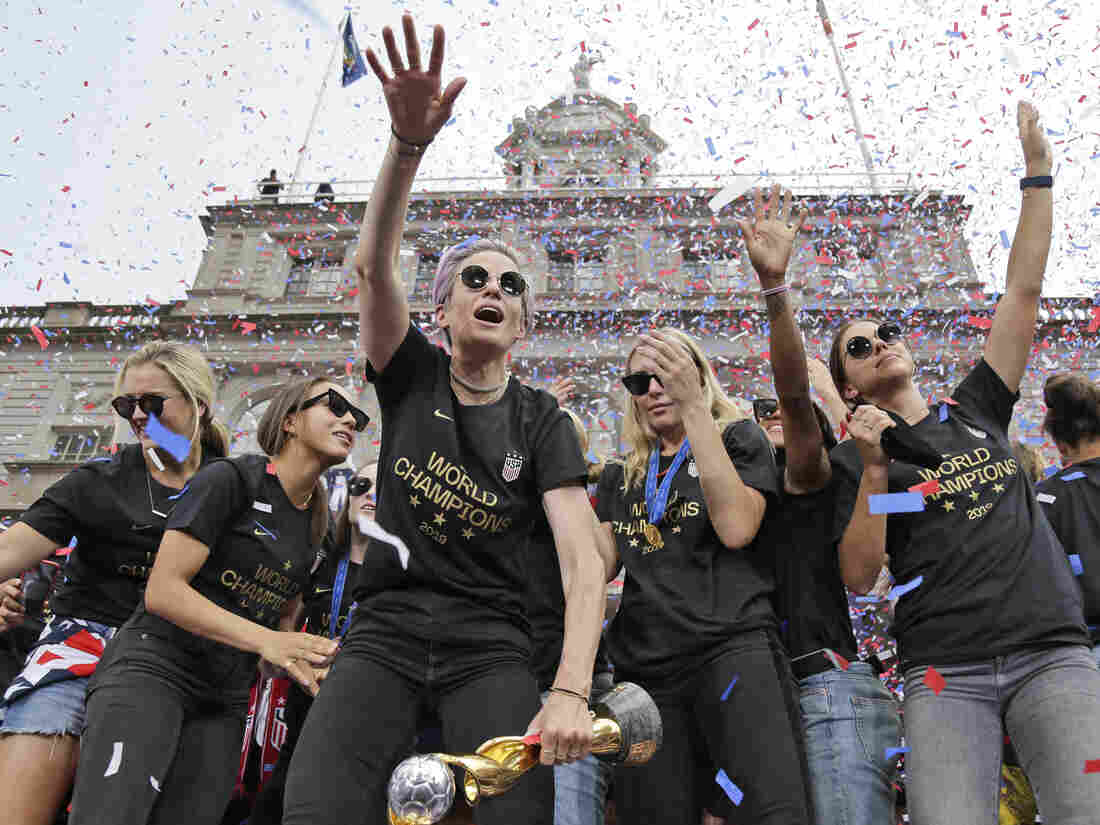 Megan Rapinoe (center) and Alex Morgan (right), pictured celebrating with U.S. women’s soccer teammates in New York after a ticker tape parade, on July 10, 2019. “We are pleased that the USWNT Players have fought for – and achieved – long overdue equal working conditions,” a spokeswoman for the team said on Tuesday.

The U.S. Soccer Federation has reached a proposed settlement with the Women’s National Team in a legal battle over working conditions but a dispute over equal pay with that of their male counterparts continues.

The agreement, filed in the U.S. District Court for the Central District of California on Tuesday, is a partial victory for the World Cup champion U.S. women’s soccer team, who will see an improvement in hotel accommodations, venues, travel and staffing that will put them on equal footing with players on the Men’s National Team.

“This is a good day. I hope everyone sees that we are a new U.S. Soccer,” U.S. Soccer President Cindy Parlow Cone told reporters in a press conference.

She noted a slew of internal personnel changes, including herself and new CEO Will Wilson, saying their “fresh approach” is helping to rebuild the strained relationship between the players and the federation.

Among the most notable changes under the proposed settlement is a requirement that “matches be played on grass in almost all circumstances.” The women’s team has been fighting for years to put an end to matches played on artificial surfaces — a condition with which the men’s team rarely contends.

The federation will also provide an equal number of chartered flights to the women’s and men’s teams, and it has agreed to offer comparable hotel accommodations for the teams. They will also have comparable staff, with 18 to 21 professional positions to provide support services to the respective teams.

“Coming to an agreement on the working conditions is just the first step,” Parlow Cone added in a reference to ongoing compensation-related litigation.

Molly Levinson, a spokesperson for the players was also pleased with the outcome of negotiations on Tuesday, although she confirmed that the WNT’s legal challenge over wages is far from over.

“We are pleased that the USWNT Players have fought for – and achieved – long overdue equal working conditions,” Levinson said in a statement.

“We now intend to file our appeal to the Court’s decision which does not account for the central fact in this case that women players have been paid at lesser rates than men who do the same job. We remain as committed as ever to our work to achieve the equal pay that we legally deserve. Our focus is on the future and ensuring we leave the game a better place for the next generation of women who will play for this team and this country.”

The case hit a major setback in May when a judge rejected the women’s team’s equal pay claim. At the time, federal Judge R. Gary Klausner pointed to differences in the structure of the men’s and women’s contracts — contracts to which they agreed in collective bargaining.

“The WNT rejected an offer to be paid under the same pay-to-play structure as the MNT [Men’s National Team] and … the WNT was willing to forgo higher bonuses for other benefits, such as greater base compensation and the guarantee of a higher number of contracted players,” Klausner wrote. “Accordingly, Plaintiffs cannot now retroactively deem their CBA worse than the MNT CBA by reference to what they would have made had they been paid under the MNT’s pay-to-play structure when they themselves rejected such a structure.”

On Tuesday, Parlow Cone said the federation and the players are engaged in “more substantial conversations on the equal pay front.”

“We are taking a new approach,” she said. “It is my hope that we continue down this path and are able to find a resolution on all aspects of this litigation.”

The settlement needs to be approved by the court before it can go into effect. A final judgment must still be entered on the equal pay claims, in order for the WNT to file an appeal.