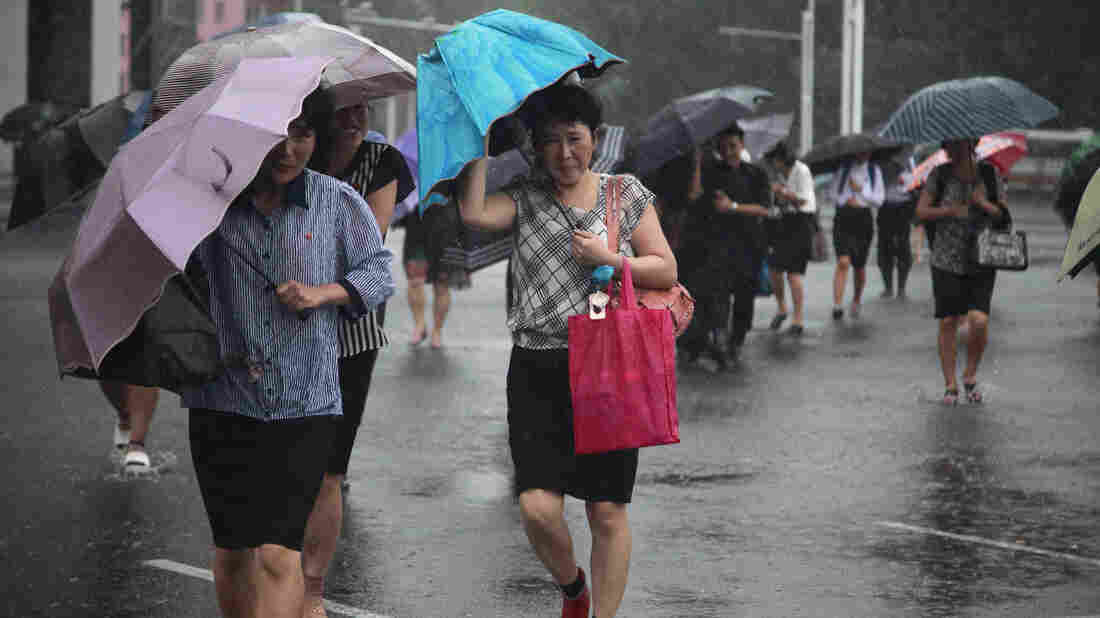 Pedestrians shield themselves from wind and rain brought by Typhoon Lingling Saturday, in Pyongyang, North Korea.

Typhoon Lingling hit South Korea on Saturday, where it knocked out power, and toppled trees and street signs before making landfall in North Korea.

At least three people have died in the storm, according to The Associated Press, and more than 161,000 homes were left without power. The storm has flooded homes and forced the cancellation of hundreds of flights.

The AP catalogued some of the destruction:

“A 75-year-old woman in the central South Korean town of Boryeong was killed after strong winds blew her off her feet and crashed her into a wall 30 meters (yards) away, the ministry said. A 39-year-old was killed in the western city of Incheon after being crushed by a collapsed wall at a hospital parking lot, while a 61-year-old Chinese national died in the border town of Paju after being hit by a blown-off roof tile.”

After hitting South Korea, the storm traveled towards North Korea at a speed of 37 miles an hour, bringing winds with speeds of up to 122 miles per hour. That’s the equivalent of the winds in a Category 3 hurricane.

North Korean leader Kim Jong Un “urgently convened” an emergency meeting on Friday to prepare for the storm, where he chastised North Korean officials as “helpless against the typhoon, unaware of its seriousness and seized with easygoing sentiment,” according to North Korea’s official Korean Central News Agency, reports the AP.

Kim said the military would drive recovery efforts from the storm, and that it would be an “enormous struggle,” KCNA reported.

KCNA said the military was preparing to “urgently dispatch forces to damaged areas by using various kinds of alarm and communications means, and secure relief goods and building equipment and materials and mobilize transport,” Reuters reported.

North Korea is deeply impoverished, and frequently suffers food shortages. The typhoon could further damage crops and food security. The AP reports Kim said the North Korean government is focusing on the protection of crops, dams and reservoirs, and that watchmen would patrol bridges, buildings and other infrastructure.