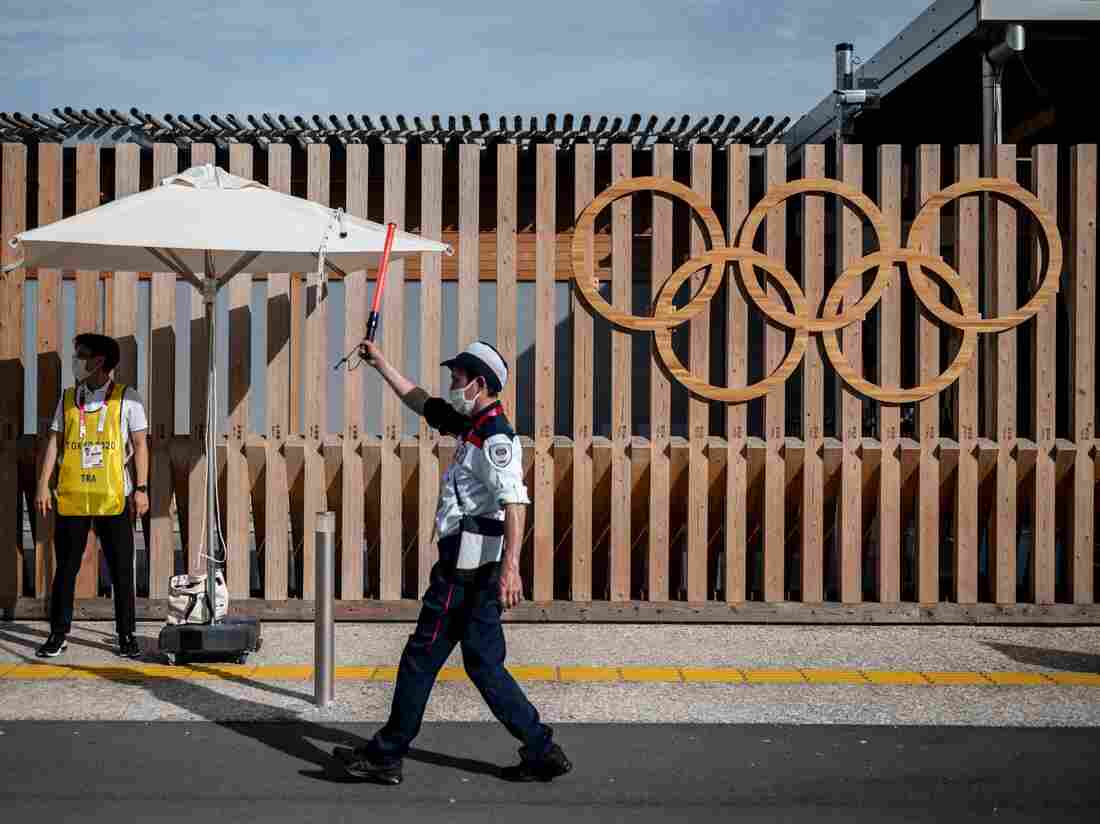 A staff member guides a taxi at one of the entrances at the Olympic and Paralympic Village in Tokyo.

With less than a week before the opening ceremonies begin at this year’s Tokyo games, at least two players on the South African soccer team have tested positive for COVID-19 inside the Olympic Village.

The two players, Thabiso Monyane and Kamohelo Mahlatsi, are the first athletes to test positive for the coronavirus at the site of the Olympic Village in the Japanese capital. A video analyst for the team, Mario Masha, also tested positive.

All three have been isolated, along with those who were in close contact with them.

Organizers for the games did not name the athletes, but said they were “non-Japanese.” Their test results were confirmed by the South African Football Association.

In a statement, the association said the team has “followed all relevant Olympic Playbook rules, protocols and procedures throughout the pre-Games and Games arrival routines.”

The association also noted that the rest of the team has tested negative.

The players tested negative before leaving for Japan

“The timing of the positive results suggests that the PCR test in these individuals was done during the incubation period of the infection, which is how they could be negative in South Africa and then positive in Japan,” Dr. Zondi said in the statement. “They are now in isolation where they will continue to be monitored and will not be allowed to train or have any physical contact with the rest of the squad.”

A fourth member of South Africa’s delegation also tested positive outside of the Olympic Village. Rugby coach Neil Powel went into an isolation facility in Kagashimo, where the country’s Sevens team is completing its training camp.

Olympic organizers also announced on Sunday that a third athlete tested positive, but did not identify the player other than to say they are not staying in the Olympic Village and are also “non-Japanese,” according to the Associated Press.

Worry is growing in Japan as positive results appear

The announcement of the new cases comes at a moment of deep trepidation inside Japan about the wisdom of holding the games, with Tokyo already under its fourth state of emergency since the pandemic began. With vaccination rates in the country lagging behind those in the United States and much of Europe, there are fears that an influx of thousands from around the world could spark new outbreaks. The state of emergency will mean no spectators during the games inside the capital, but even without international fans, more than 18,000 people are expected to come in for the games.

Though the results announced Sunday are the first cases to appear in athletes, there are growing concerns that others will test positive before competition begins later this week.

So far, more than 45 people affiliated with the Games have tested positive since the beginning of July, most of them contractors. That includes Ryu Seung-min of South Korea, who on Saturday became the first member of the the International Olympic Committee to test positive upon arrival in Tokyo.

What precautions are in place

Originally scheduled for July 2020, the games were postponed due to the pandemic, giving organizers time to try and put measure in place to keep athletes, staff and locals safe.

Japanese officials and officials with the Olympic organizing committee have been trying to limit interactions between people who live in Japan and the athletes and others who are coming in for the games.

Those coming in for the games, including journalists, are being separated from everyone else upon arrival to Tokyo. They must have received two negative tests prior to flying in and are given another test upon arrival. While in mandated quarantine, they are tested once a day to make sure they are not positive.

While there are safety measures in place, the majority of Japanese citizens have said they don’t want the games to go forward. Less than a quarter of Japan’s population has been fully vaccinated.

Leila Fadel contributed to this report.