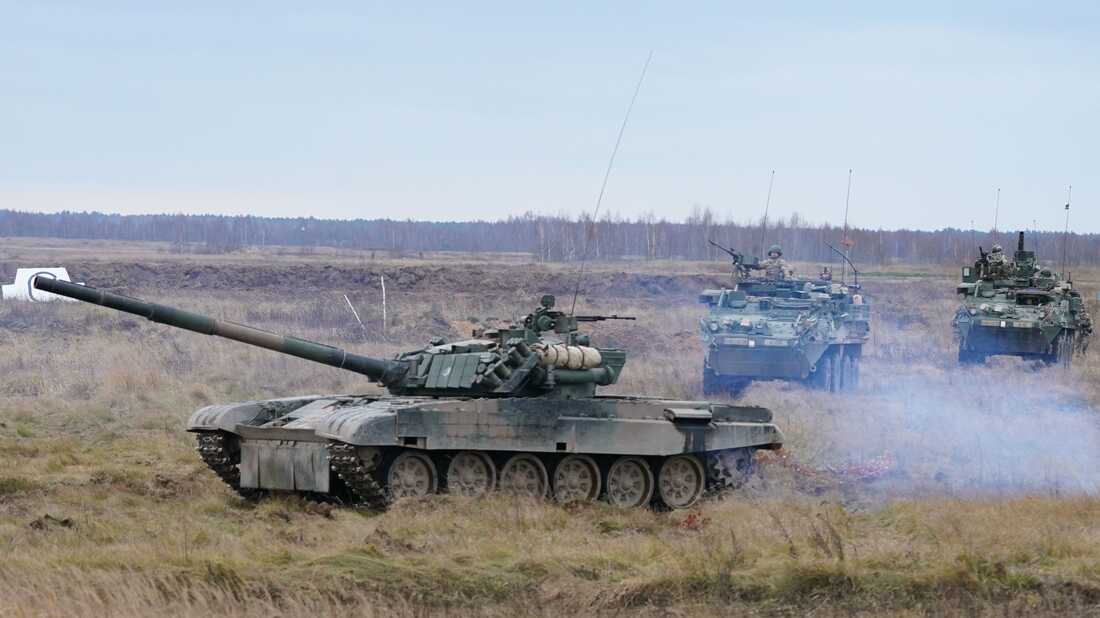 Enlarge this image Soldiers of Poland, Britain, US and Romania take part in military exercises at the military training ground in Bemowo Piskie, Poland on Nov. 18, 2021. Janek Skarzynski/AFP via Getty Images Janek Skarzynski/AFP via Getty Images The Biden administration is considering sending as many as 5,000 U.S. troops to Eastern Europe, a U.S. official confirmed to NPR, in what would be a step-up in American military involvement in the region amid growing fears of a Russian invasion of Ukraine. U.S. troops could be headed to Romania and Poland, or possibly Bulgaria or Hungary. No final decision has been made but the troops have been told to be ready to move, the official said. U.S. service members could be drawn from their existing posts elsewhere in NATO countries in Europe. Some of the troops would also likely come from the 82nd Airborne Division at Fort Bragg, N.C. The New York Times, which first reported the news of planned troop movements, said senior Pentagon officials laid out a number of options for President Biden on Saturday. Among them, sending 1,000 to 5,000 troops to Eastern European countries and the Baltics, "with the potential to increase that number tenfold if things deteriorate," according to the Times. There are no plans to send more Americans into Ukraine itself, according to the paper. The Biden administration has held back on more aggressive actions, for fear of inciting a Russian invasion. So far, U.S. aid to Ukraine has largely come in the form of military equipment. A Biden administration shipment of aid — close to 200,000 pounds of "lethal aid" including ammunition — arrived in Ukraine on Sunday. In October, the U.S. sent Ukraine 30 Javelin anti-tank guided missile systems. There are already more than 150 U.S. military advisers in Ukraine, the Times reported, though they are far from any potential front lines and would likely leave the country quickly after a Russian invasion. Loading... Last week, Biden said he had warned Russian President Vladimir Putin that his country's invasion of Ukraine would cause Washington to send more troops to the region. "We're going to actually increase troop presence in Poland, in Romania, et cetera, if in fact he moves," Biden said in a news conference, pointing out that the two countries are NATO members. Ukraine is not a NATO member, and Russia has demanded that it never become one. Russia has stationed over 100,000 troops near the Ukraine border, threatening an imminent assault on the country. Russia has rejected that it has such plans in store. While Ukraine boasts mighty military power, Russia's bigger, more modern army would likely give it the upper hand should the country invade. The State Department earlier Sunday ordered the departure of diplomats' families from Ukraine, in a move that officials assured did not signify waning support for the country. Tom Bowman contributed reporting. Adblock test (Why?) [...]
Mon, Jan 24, 2022
Source: Headlines -NPR Category: TOP NEWS
Jan. 6 panel is investigating a Trump administration plan to seize voting machines
by Matthew S. Schwartz 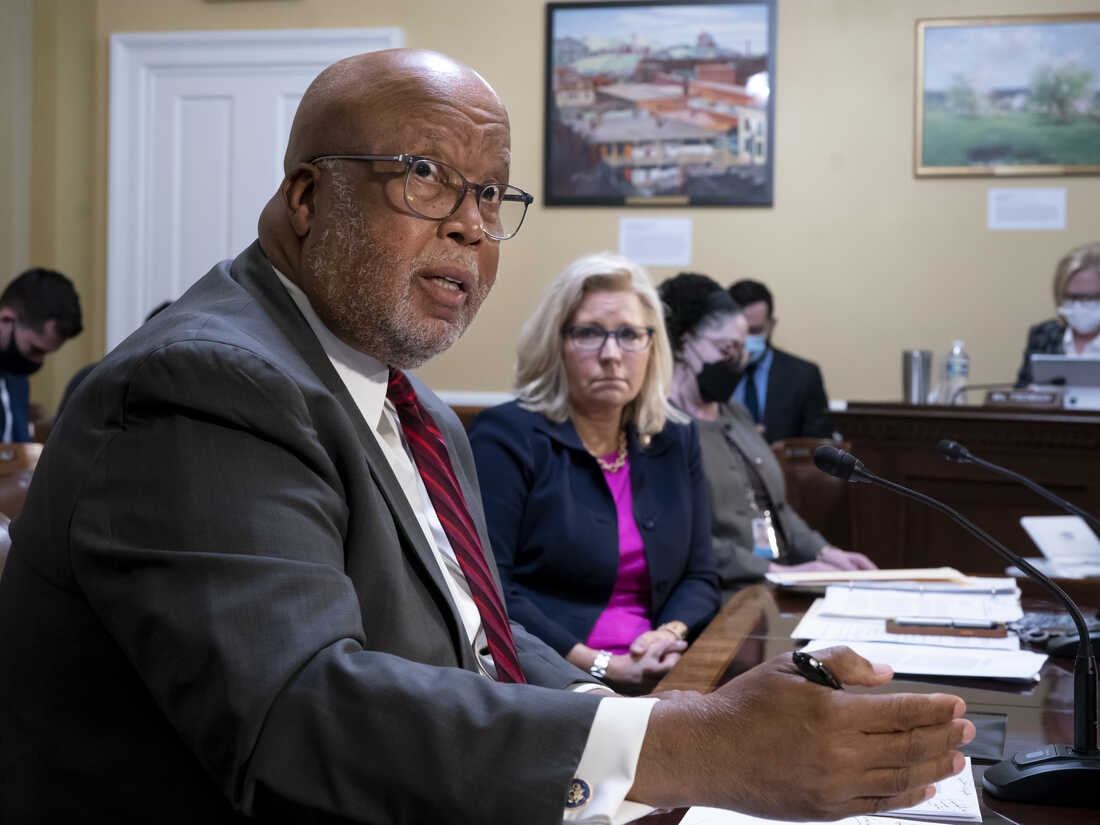 Enlarge this image Chairman Bennie Thompson, D-Miss., of the House panel investigating the Jan. 6 U.S. Capitol insurrection testifies before the House Rules Committee in December. J. Scott Applewhite/AP J. Scott Applewhite/AP The House panel looking into last January's attack on the Capitol is investigating a plan that would have directed the secretary of defense to seize voting machines in battleground states, Jan. 6 Committee Chairman Rep. Bennie Thompson, D-Miss., told Face the Nation on Sunday. "If you are using the military to potentially seize voting machines ... the public needs to know," Thompson said. Politico reported Friday that an executive order was drafted in December 2020 citing conspiracy theories about election fraud and foreign ownership of Dominion voting machines. The order, complete with a dotted line ready for Trump's signature, would have directed the secretary of defense to "seize, collect, retain and analyze all machines, equipment, electronically stored information, and material records required for retention" under a law that relates to preserving election records. The draft order provided seven days for the secretary of defense to issue an initial assessment, and 60 days for a final assessment, to the Office of the Director of National Intelligence. It then ordered that the assessment and supporting information be disseminated throughout the Executive Branch. In his comments Sunday, Thompson backed up that reporting. "We have information that between the Department of Justice, a plan was put forward to potentially seize voting machines in the country and utilize Department of Defense assets to make that happen," he said. The committee has already had conversations about the draft order with former Attorney General Bill Barr and various Department of Defense officials, Thompson said. Thompson said the committee was also aware of a plan to appoint a new attorney general, who would then tell certain states that the election had been fraudulent, and direct them not to produce certified documents. The committee's job, Thompson said, "is to get to the facts and circumstances of how far did they go" in implementing that plan. The committee plans to have a series of public hearings "showing the use of federal assets, Department of Justice, Department of Defense and other agencies to actually stop the duly election of a president," he said. Last week the committee moved its investigation to Trump's inner circle by asking Ivanka Trump to voluntarily cooperate and requested phone records for Trump's son, Eric Trump, and Kimberly Guilfoyle, who is engaged to Donald Trump Jr. Adblock test (Why?) [...]
Mon, Jan 24, 2022
Source: Headlines -NPR Category: TOP NEWS
Ukraine crisis deepens after U.K. says Russia may try to install a pro-Kremlin leader
by Joe Hernandez Enlarge this image People rallying in patriotic support of Ukraine hold a 500 meter long ribbon in the colors of the Ukrainian flag outside St. Michael's Golden-Domed Monastery on Unity Day on January 22, 2022 in Kyiv, Ukraine. Sean Gallup/Getty Images Sean Gallup/Getty Images The situation along the Russia-Ukraine border remains tense, as Russia has amassed an estimated 100,000 troops just across the divide while Ukraine's outnumbered military prepares to defend itself against a possible invasion. Adding to the turmoil, the British government revealed details on Saturday of what it called an alleged Russian plot to install a pro-Kremlin leader in the Ukrainian capital of Kyiv. The U.K. Foreign Office said it also had information that Russian intelligence services remained in contact with several former Ukrainian politicians, including an ex-prime minister. "The information being released today shines a light on the extent of Russian activity designed to subvert Ukraine, and is an insight into Kremlin thinking," Foreign Secretary Liz Truss said in a statement. "This is very much part of the Russian toolkit," U.S. Secretary of State Antony Blinken said on CNN's State of the Union on Sunday. "It runs the gamut from a large, conventional incursion or invasion of Ukraine to these kind of destabilizing activities in an attempt to topple the government, and it's important that people be on notice about that possibility." Russia's Ministry of Foreign Affairs called the allegations "disinformation" and "nonsense" in a tweet on Saturday and said it was another example of Western nations escalating tensions around Ukraine. Andrea Kendall-Taylor, a fellow at the Center for a New American Security and a former senior intelligence officer, told NPR's Weekend Edition Sunday that it's fair to question the details of the U.K. report, but that interfering in Ukraine's government is consistent with what Russia appears to want to accomplish in the region. "What Russia wants is to have some autonomy in the East that would give Russia a veto over Ukraine's foreign policy, and they're looking for a guarantee that Ukraine will not join NATO," Kendall-Taylor said. Doing so would likely require toppling the government of Ukrainian President Volodymr Zelensky government, she said, "and/or securing a demanding military position that can help Russia extract those demands from Kyiv and the United States and NATO." Last week the Treasury Department's Office of Foreign Assets Control sanctioned four Ukrainians, including two sitting members of parliament, for engaging in "Russian government-directed influence activities to destabilize Ukraine." People are preparing for conflict but hoping for peace NPR's Central Europe Correspondent Rob Schmitz reports that the mood in Kyiv is one of "patient resolve," with restaurants full and children sledding on snow-dusted hills. It's not that citizens are naive about the possibility of a military incursion, but rather that Ukrainians have said they've adjusted to life under the constant threat of Russian aggression. "We have been living in a state of war for the last seven years going on eight now," Lesia Vasylenko, a Ukrainian member of parliament, told NPR. "Physically, psychologically, emotionally, it would be impossible if all of us up to now would be still stressed, would be concerned 24/7 and showing signs of anxiety. You would see a different Ukraine then," she said. Russia has said it has no plans to invade Ukraine, but the build-up of Russian troops along the border has prompted the U.S. to provide Ukraine with increased military aid for national defense. A nearly 200,00-pound shipment of "lethal aid" approved by President Biden, including ammunition for Ukraine's front-line troops, arrived in the country over the weekend, the U.S. Embassy said. Blinked said on CNN that the U.S. has given Russia "two paths" through the current crisis. "There's the path of diplomacy and dialogue," he said, "but there's also a path of its renewed aggression and massive consequences that we have been building now for many weeks." Pope Francis has called for an international "day of prayer for peace" on Wednesday, urging politicians to find a nonviolent solution to the crisis and expressing concern over the security of Europe. Meanwhile the head of the German navy has resigned after saying that Ukraine would not be able to regain the Crimean Peninsula, which Russia annexed in [...]
Sun, Jan 23, 2022
Source: Headlines -NPR Category: TOP NEWS
AdSense
Copyright 2008-2015 MeYouWorld.net
Wordpress SEO Plugin by SEOPressor