To Better Understand The Arctic, This Ship Will Spend A Year Frozen Into The Ice 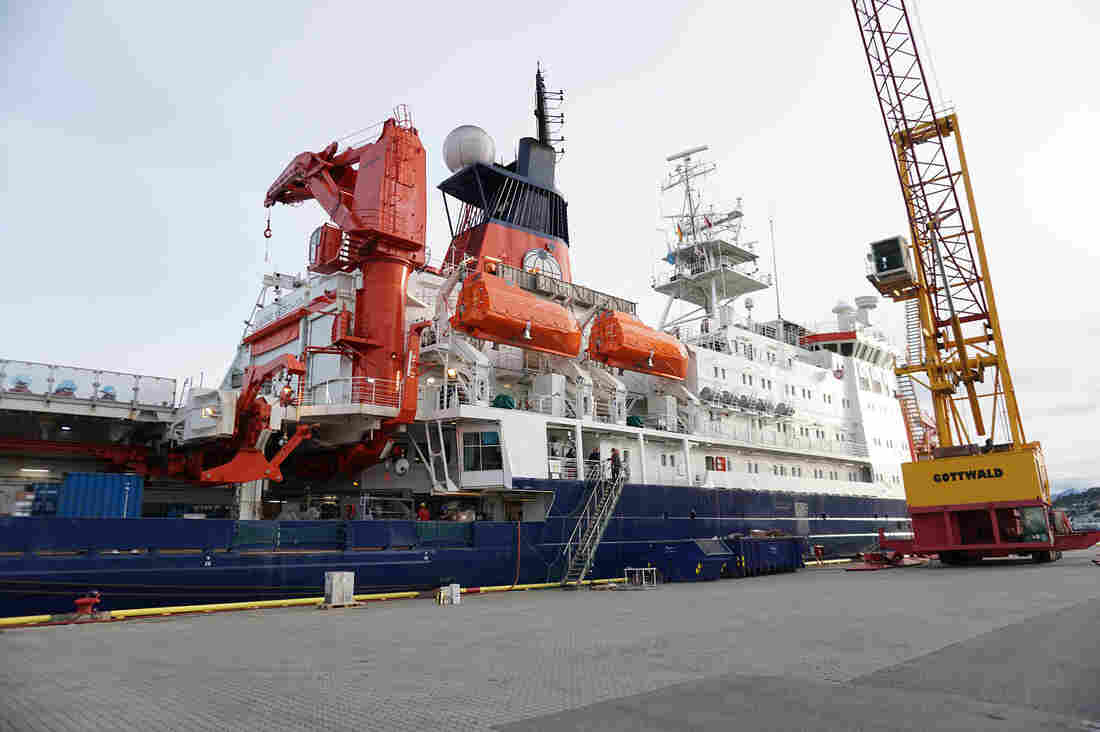 The German icebreaker Polarstern sits in Breivika harbor in Tromso, Norway, on Tuesday. If all goes according to plan, it will spend the next year frozen into the Arctic sea ice.

The mission is known as the Multidisciplinary drifting Observatory for the Study of Arctic Climate, or MOSAiC. Its overarching goal is to collect a vast trove of data that can help improve how the Arctic is represented in climate models.

To do that, a group of scientists will try to freeze an icebreaker into the ice — for an entire year.

On a recent day in Tromso, Norway, around 200 people are cycling through the German icebreaker Polarstern as it sits docked in Breivika harbor. They’re moving massive amounts of equipment on board, unpacking instruments and starting to install and test them.

A row of snowmobiles sits on the concrete down below, ready for loading. A massive orange crane is lifting shipping containers, some of which will even be used as lab space, and placing them on the boat.

One of the people involved in these preparations is Matthew Shupe, an atmospheric scientist with the University of Colorado and the National Oceanic and Atmospheric Administration.

“Excited and nervous,” he says. “I’m both of those things.”

Shupe is a co-coordinator of the project. With hundreds of researchers from some 19 countries involved, it will be the largest Arctic expedition in history. 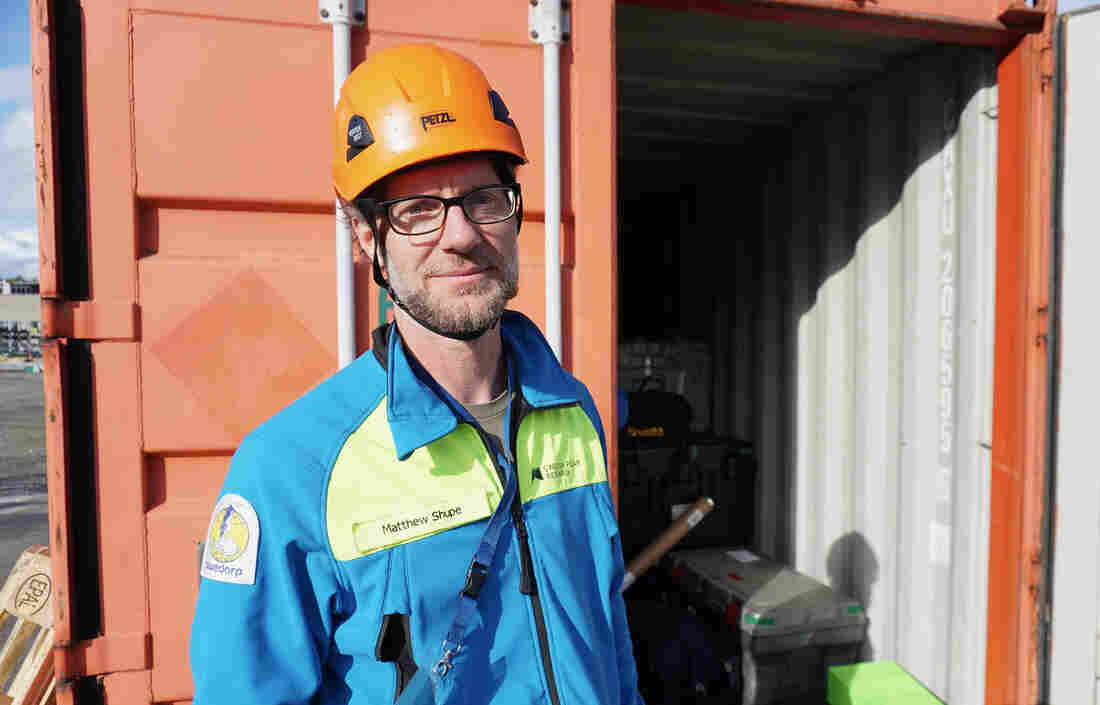 Matthew Shupe, an atmospheric scientist with the University of Colorado and the National Oceanic and Atmospheric Administration, is a co-coordinator of the MOSAiC mission.

The project will study the ocean, the atmosphere and the sea ice. Researchers will be digging into all kinds of questions about the physics, the biology and the chemistry of those systems.

“The science is extremely diverse,” Shupe says. “It’s all kind of focused on the sea ice, though. The sea ice is the centerpiece of it all.”

As the Arctic has warmed over the past few decades, the sea ice on the Arctic Ocean has gotten thinner and now covers a lot less area.

The last time researchers took such a comprehensive look at the Arctic Ocean system was through a project called SHEBA, more than two decades ago. Back then, the Arctic was a totally different landscape, and the picture they captured is rapidly becoming outdated.

“As we have a thinner ice pack, that changes the way energy transfers through the ice,” Shupe says. “It changes how the ice breaks up, how the ice moves around. There’s so many different kinds of new behaviors of the ice because it’s taking on a new character that we really need to study.”

The sea ice, the atmosphere and the ocean are linked. So changes in the ice could mean a cascade of changes in everything from how clouds are formed to how much carbon dioxide is being absorbed by the ocean to how organisms that depend on the ice are functioning.

One of the projects Shupe is working on involves looking at aerosol particles in the atmosphere, which act as seeds for clouds. Byron Blomquist, another researcher at the University of Colorado, will be part of an effort to measure how gases such as carbon dioxide and methane travel between the ocean and the atmosphere throughout the year. Other researchers will be looking at the abundance and composition of algae in the ice and water and how algae operate within the larger food web. 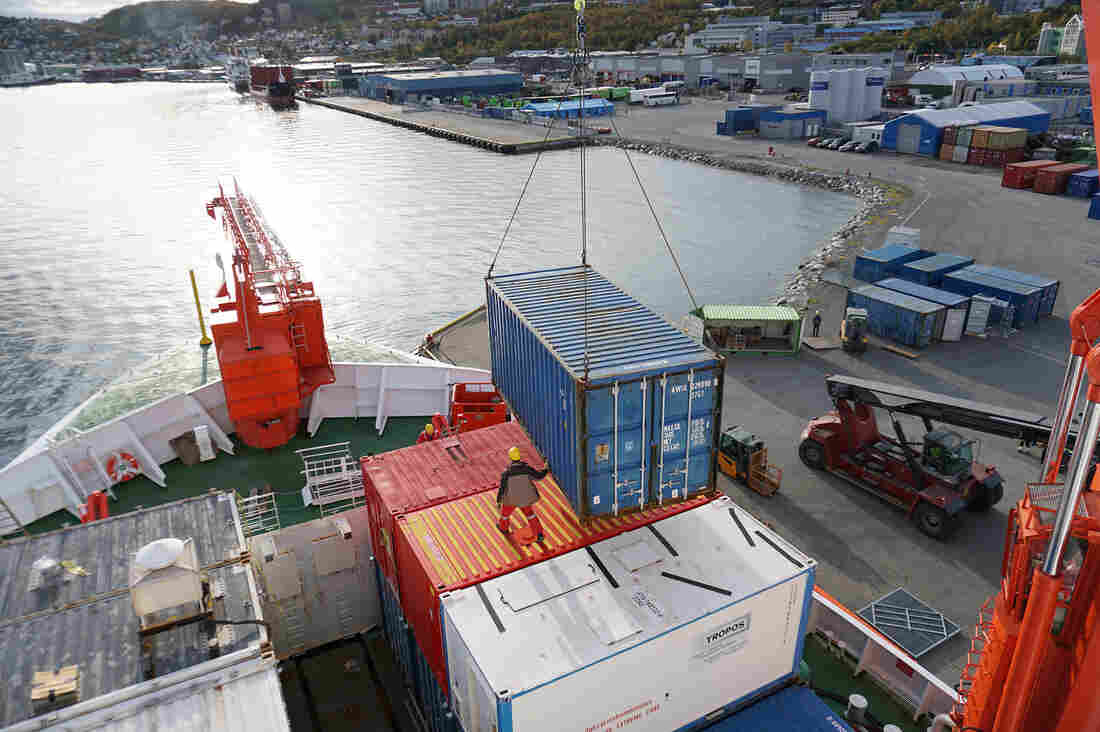 A crane moves a shipping container, some of which will be used as lab space, onto the front of the Polarstern. The German icebreaker will need to cozy up to a big ice floe in the Arctic Ocean and then freeze in next to it over the winter.

Scientists need to observe how all these things interact in the “new Arctic” so they can better reflect them in climate models. That will lead to a better understanding of things such as how fast the Arctic sea ice could melt and the effect that a warming Arctic could have on global temperatures.

Here’s the catch: What these scientists are about to attempt is dicey.

“I think we’ll find a nice situation, but it’s not clear yet,” says Markus Rex, an atmospheric scientist with the Alfred Wegener Institute, which is spearheading the mission. “I am nervous about it, of course.”

To study how the sea ice system evolves over an entire calendar year, the ship will need to cozy up to a big ice floe and then freeze in next to it over the winter. After that, the scientists will just have to go where the ice takes them.

“The selection of the starting point is really the main parameter that determines how the expedition will go. That’s the only degree of freedom we have,” Rex says.

It’s possible that the ice they pick could melt too early. Or it could wind up taking them somewhere they don’t want to go, like into Russia’s exclusive economic zone, where the ship would have to stop taking measurements, or into a spot called the Beaufort Gyre.

“That’s a large gyre of ice where the ice just circles around for many years north of Greenland and north of Canada — we don’t want to get stuck in that,” says Rex.

Mission planners have studied over a decade of satellite data to help them get a better sense of drift patterns they might follow, and they’re looking at daily high-resolution satellite images of the ice to help them identify floe candidates.

But they won’t really know what they’ll find until they get out there. The Polarstern is expected to reach the edge of the sea ice within a few weeks.