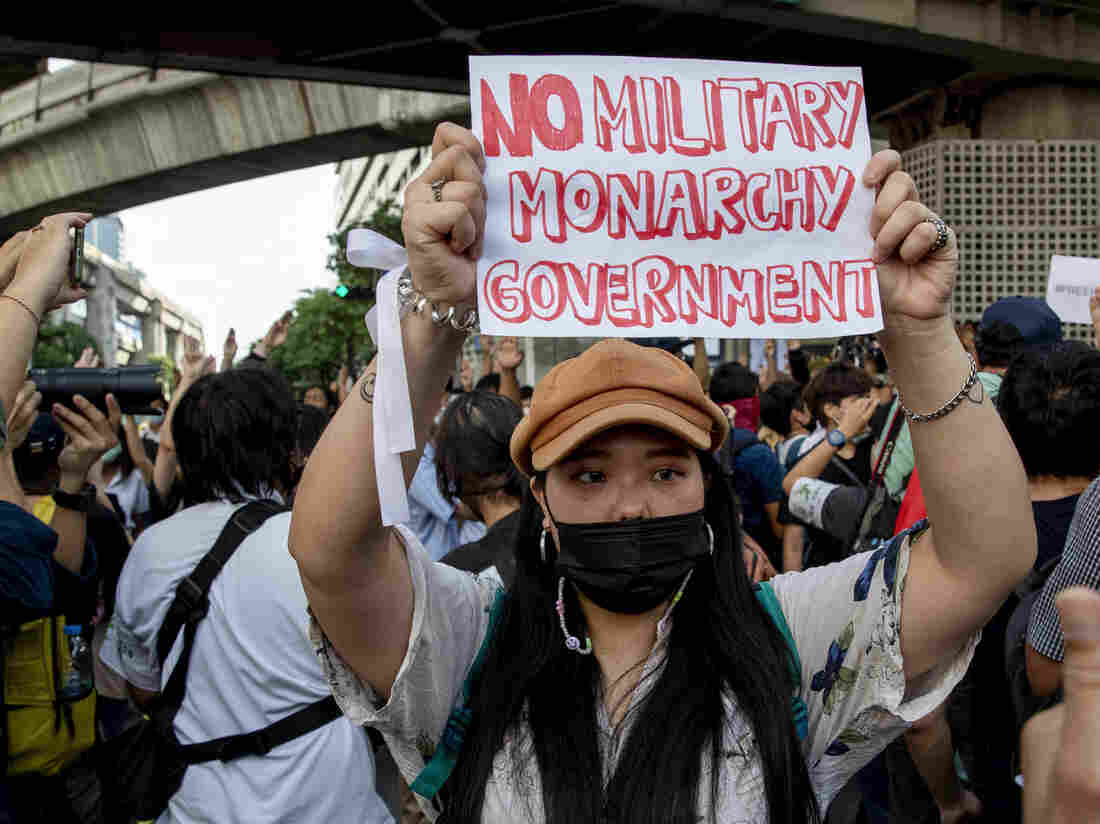 A pro-democracy protester displays a sign during a demonstration Thursday in the central business district of Bangkok.

Thailand’s government has declared a “state of extreme emergency” in the capital, Bangkok, after an extraordinary day of anti-government protests that saw demonstrators blocking and heckling a royal motorcade in defiance of strict laws forbidding any criticism of the monarchy.

On Wednesday, masked protesters shouted and flashed the three-fingered salute from The Hunger Games that has come to symbolize their resistance movement as they taunted King Maha Vajiralongkorn and Queen Suthida, ensconced inside the royal limousine.

The incident was a stark departure in a country where ordinary Thais are taught from birth to revere the monarchy and even prostrate themselves in the presence of the king.

In Thailand, which has a long history of coups, the monarchy has frequently lent at least tacit approval to military rule. In turn, politicians have often blurred the lines between the government and the crown, using the laws meant to protect the king — which carry harsh sentences of up to 15 years in prison — to silence political opponents.

This striking .@Reuters .@jgesilva photo showing Queen Suthida of Thailand’s shock as protesters confront the royal motorcade in Bangkok on October 14 captures why #whatshappeninginThailand right now is historic and deserves your attention. A THREAD (1/10)👇 pic.twitter.com/lUfjeFsyFl

The government’s pre-dawn emergency decree was followed swiftly by police in riot gear who moved in to break up protests and arrest student leaders around the office of Prime Minister Prayuth Chan-ocha, a former army general who seized power in a 2014 coup. The protesters are calling for Prayuth to step down and for constitutional reforms, including new curbs on the power of the monarchy.

The declaration also bans gatherings of more than five people and the publication of news or messages online that could “harm national security.” The announcement said the measures were necessary because Wednesday’s anti-government demonstration caused “chaos and disorder.”

The Bangkok Post, quoting unnamed government sources, said hundreds of soldiers from the western Kanchanaburi province were sent to Parliament and that 300 others would be sent to guard Government House. 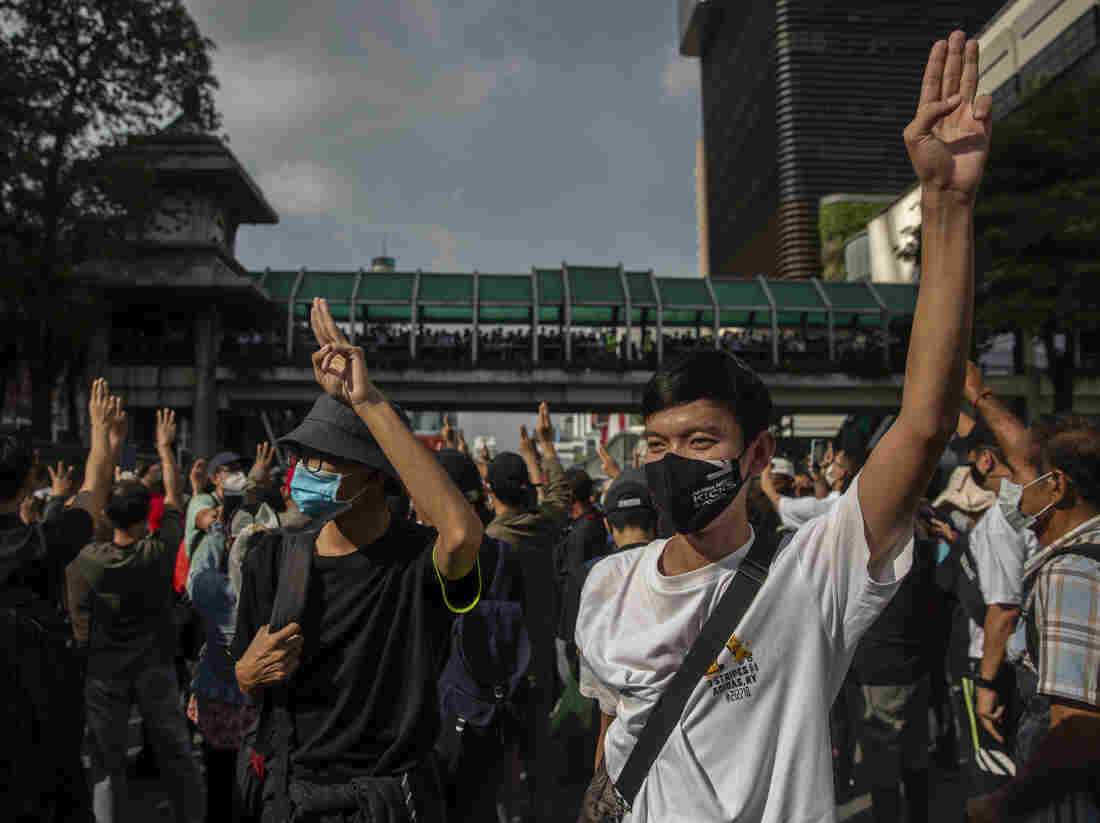 Even so, tens of thousands of protesters were ignoring the decree, gathering peacefully in other parts of the capital, including at a prestigious university and at the city’s iconic Democracy Monument.

Outside a popular shopping center in central Bangkok, people were heard shouting, “Down with dictatorship. … Get out. … Release our friends,” in a reference to the arrested student leaders, according to the Bangkok Post.

“Like dogs cornered, we are fighting till our deaths,” Panupong “Mike Rayong” Jadnok, one the high-profile protest leaders who remains free, told a crowd at a rally near the city’s Ratchaprasong intersection, according to Reuters. “We won’t fall back. We won’t run away. We won’t go anywhere.”

Wednesday’s public rebuke of the royal family comes four years after the death of the widely respected King Bhumibol Adulyadej, known as Rama IX. By contrast, many Thais resent Bhumibol’s son, Vajiralongkorn, who spends much of his time out of the country, appearing to spend lavishly, even as the country’s economy has suffered amid the pandemic.

Some experts believe that by blocking the royal motorcade, the protests — which began in March but were put on hold by the coronavirus pandemic, only to reemerge in July — have moved into a more dangerous phase.

“Yet it is reflective of how a new generation of protesters sees the monarchy and military-backed regime as intertwined and that political reform demands reform of the monarchy as well,” Hewison told The Associated Press.

Michael Montesano, coordinator of the Thailand studies program at the ISEAS-Yusof Ishak Institute in Singapore, told the AP that the country was entering “dangerous territory.”

“What seemed to be a low-boil stalemate that the Prayuth government was managing with reasonable success has now, following the incident involving the procession of the queen’s motorcade down a street in which an active protest was underway and the arrests of protest leaders, become a full-blown crisis,” he said.

The protest on Wednesday was held on the anniversary of a 1973 student-led uprising against a military dictatorship when troops brought in to quell the unrest killed dozens of protesters.

In 2010, the Thai military once again put down populist anti-government protests, killing more than 80 people.

Michael Sullivan, reporting for NPR from Bangkok, contributed to this report.