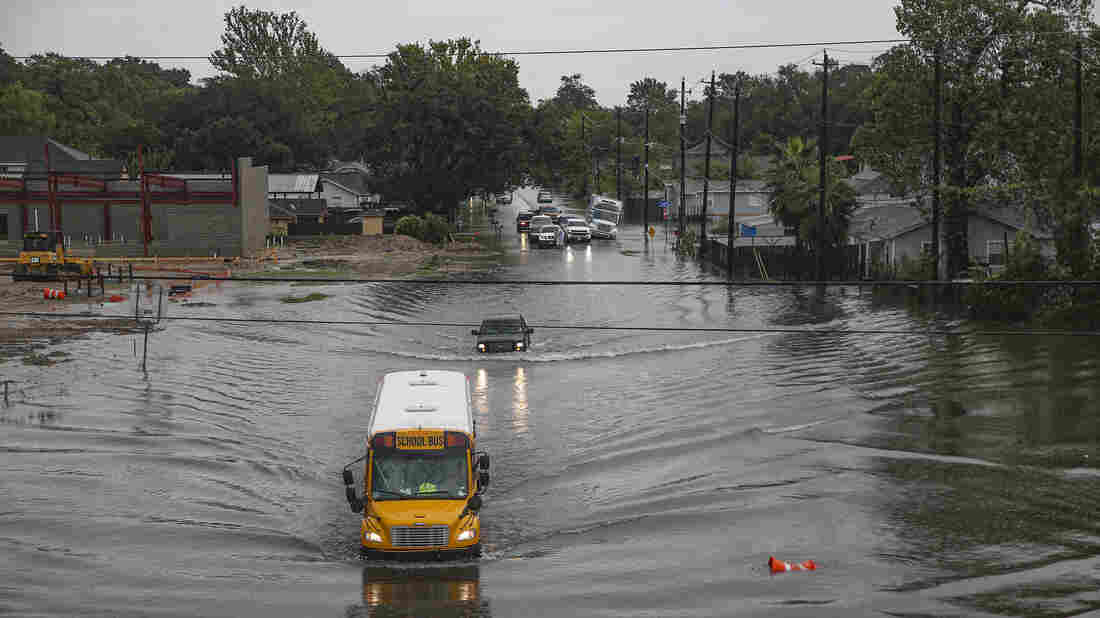 A school bus makes its way through a flooded section of Hopper Road in Houston on Thursday. Texas Gov. Greg Abbott has declared much of southeast Texas disaster areas after heavy rain and flooding from the remnants of Tropical Depression Imelda.

Large areas of southeast Texas remain flooded Friday as officials work to get a broader sense of the damage left by Tropical Depression Imelda — a catastrophic weather event that swamped hundreds of cars and homes and claimed the lives of at least two people.

The storm has dropped massive amounts of rain, drawing comparisons to the devastation wreaked by Hurricane Harvey two years ago.

The National Weather Service in Houston said in a tweet that the amount of rainfall in Houston and Galveston on Thursday was “one for the record books.” It said Galveston had gotten 17.77 inches of rain just in the past four days.

Some areas saw as much as 20 to 40 inches of rain — North Fork Taylors Bayou near Port Arthur, Texas, topped more than 43 inches of rain as of Friday morning.

While Imelda has dissipated, the National Weather Service says “remnants will still bring heavy rain and possible flash flooding” to portion as far away as the Texas-Arkansas-Louisiana border.

Authorities are grappling with just how much destruction the storm caused. 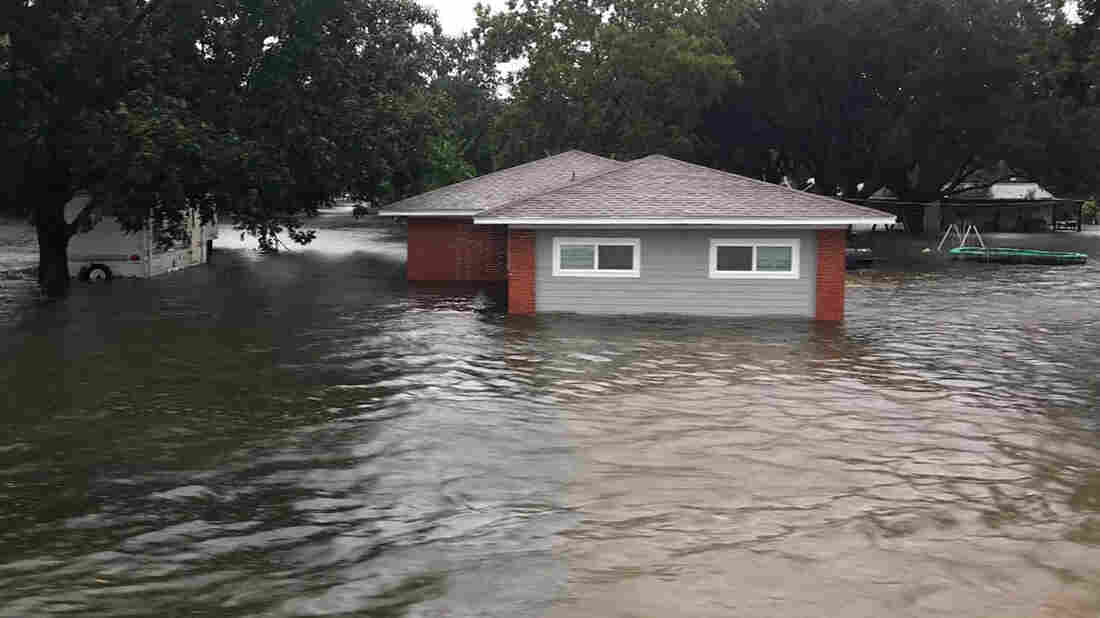 In this photo provided by the Chambers County Sheriff’s Office, floodwaters surround a home in Winnie, Texas, after Imelda raked the area.

“The damage assessments are going on,” Houston Police Chief Art Acevedo tells NPR’s Here & Now. “I know in the city itself [Houston], we’re going to have upwards of 200 structures [destroyed], which compared to Harvey is negligible. But as we spread out from the the city of Houston and go east … to Beaumont, that count is going to be much much higher.”

FIRST LOOK! If you’re traveling east out of Houston today, you’re about to be in a traffic nightmare. Call your family or friends. Let them know. #BREAKING #abc13 #hounews https://t.co/JboldDCkdf

The U.S. Coast Guard says surging currents caused nine barges to break away from their moorings in the San Jacinto River. At least two barges crashed into a bridge over the river, shutting down a major east-west highway just east of Houston.

“The bridge is off limits until highway officials determine the bridge is safe for traffic,” Joseph Leahy of member station KUT reports. “Several other stretches of [Interstate-10] and other local highways are impassable this morning due to flooding. Flash flood warnings remain in effect across the region as high water from the storm moves downstream.”

At least two deaths have been attributed to the storm.

Here are some additional rainfall records for Houston Hobby and the city of Galveston. #houwx #glswx pic.twitter.com/E5OzdwAwmL

Harris County Sheriff Ed Gonzalez says a man in a his 40s or 50s drowned Thursday when he attempted to drive his vehicle though floodwaters that some 8 feet deep near Houston’s George Bush Intercontinental Airport.

“According to witnesses for some unknown reason, he just punched it and tried to drive through it some more,” Gonzalez told reporters. “They did try to go into water to see if they could pull him out to no avail.”

A second man was electrocuted and drowned while trying to move his horse, according to a message from the family of the 19-year-old victim, Hunter Morrison, that was shared by the Jefferson County’s Sheriff’s Office.

“Right now my family and I are going through one of the most horrific times in our lives with losing Hunter,” the family message said.

The Houston Fire Department says its crews performed more than 900 water rescues on Thursday and were dispatched to nearly 1,800 emergency calls.

On Friday, the U.S. Coast Guard tweeted out a short video of people being helped off a helicopter, adding that crews in Houston and New Orleans have “completed multiple medevacs and rescues”

“USGC Air Station Houston and Air Station New Orleans have completed multiple medevacs and rescues in the Beaumont area due to flooding caused by Tropical Depression #Imelda,” it said. 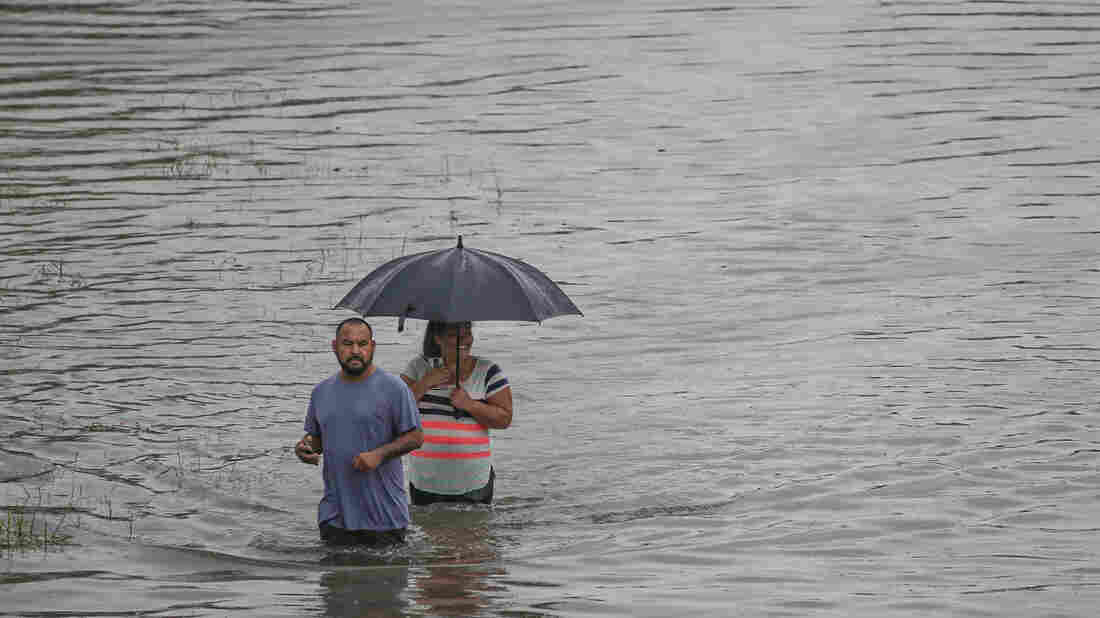 People in Houston navigate the floodwaters on Thursday. The city got more than 9 inches of rain on that day alone, according to the National Weather Service in Houston.