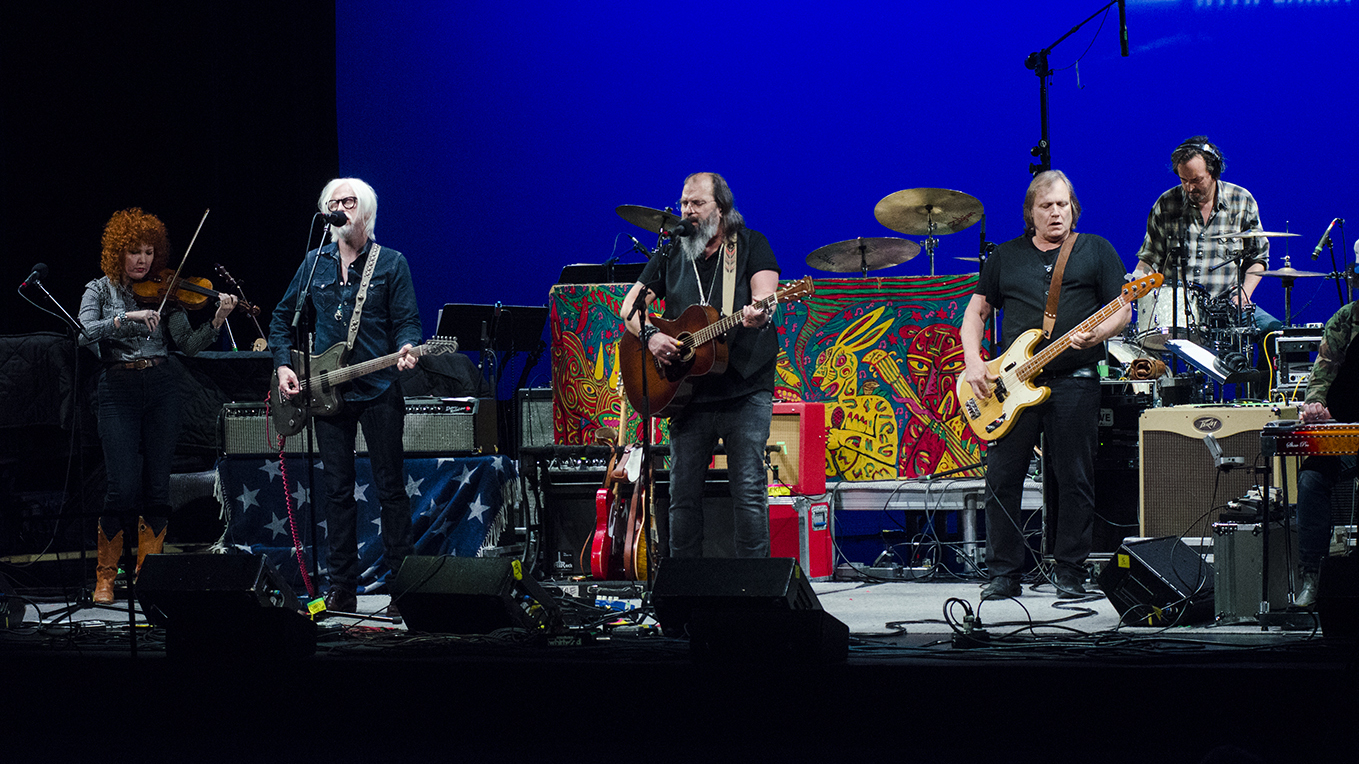 One of the last of the hard-core troubadours, three-time Grammy winner Steve Earle made his seventh appearance on Mountain Stage on June 23 at the Cultural Center Theater in Charleston, W.Va. The show occurred during FestivALL, Charleston’s local arts celebration, and featured guest host Kathy Mattea.

Mattea, who used to sing demos for Earle, told the crowd about how she and Earle signed record label deals in Nashville on the same day (which happened to be her 24th birthday). She called Earle someone with “a big brain and a big heart underneath that gruff exterior.”

Earle’s six-song set included songs and stories about his mentor, the late, great country songwriter Guy Clark, who succumbed to cancer on May 17, 2016. (Interestingly, Earle’s first appearance on Mountain Stage back in August 1996 coincided with a performance from Clark.)

Armed with his ace backing band, The Dukes (Brad Pemberton on drums, Kelley Looney on bass, Chris Masterson on guitar and vocals, Eleanor Whitmore on fiddle and vocals, and Ricky Ray Jackson on pedal steel guitar and accordion), Earle started with “Dublin Blues,” the poetic and cinematic title cut from Clark’s 1995 album. He followed it up with three more Clark songs — “Texas 1947,” “Desperados Waiting For A Train,” and “L.A. Freeway” — all from Clark’s 1975 classic, Old No. 1. (You can hear Earle perform these songs in a studio setting on his Clark tribute album, GUY, which came out earlier this year.)

“We were backstage weeping when he sang those Guy Clark songs. They mean so much to so many of us,” Mattea said. “When you write like Steve Earle and choose to make an album of someone else’s songs and steep yourself in someone else’s writing like a tea bag, that says everything about respect.”

After a spirited version of his signature song, “Copperhead Road,” Earle performed a new song, “Union, God and Country,” which he wrote for a play based on the Upper Big Branch Mine coal mine disaster. That play, Coal Country (written by Jessica Blank and Erik Jensen), premieres at the Public Theater in New York City in February 2020, and Earle said he is basing his next record on the songs he wrote for the play.