Russia’s Government Resigns As Putin Moves To Change The Constitution 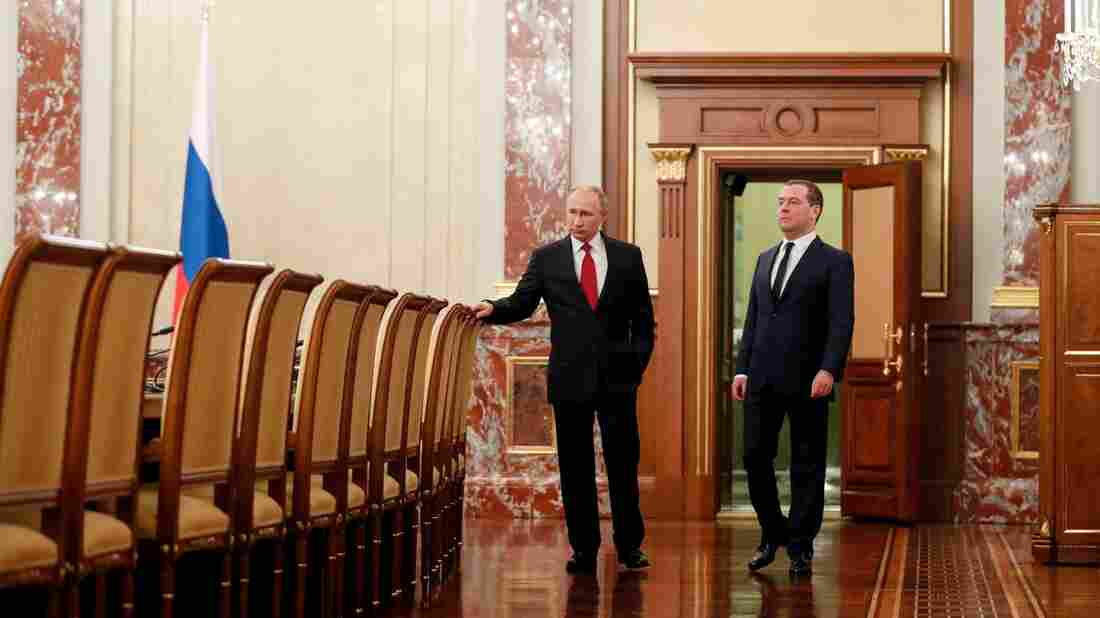 Russian President Vladimir Putin and Prime Minister Dmitry Medvedev speak before a meeting with members of the government Wednesday in Moscow. The cabinet members resigned after Putin proposed a series of constitutional reforms, according to Russian news agencies.

In one dramatic stroke, the Russian cabinet has been emptied.

The principal ministers of the Russian government, from Prime Minister Dmitry Medvedev on down, resigned Wednesday in a move designed to ease a constitutional overhaul recently proposed by President Vladimir Putin. The president accepted Medvedev’s resignation and said he would appoint his longtime loyalist to the Russian Security Council.

Putin also nominated Mikhail Mishustin, head of the Federal Tax Service, to replace Medvedev as prime minister, according to Russia’s state-run TASS news agency. The rest of the ministerial cabinet is expected to remain until their replacements are determined.

The surprising mass resignation, which Medvedev announced during a meeting of the ministers in Moscow, came not long after Putin put forward a package of proposed constitutional amendments in his annual state of the nation address.

“After those amendments are adopted — and it was said that this is likely to be done following discussion — there will be significant changes not only to a variety of constitution articles, but to the balance of power, namely to the executive, legislative and judicial branches of power,” Medvedev explained in the meeting, TASS reports.

The package includes proposals to strengthen the country’s State Council and boost lawmakers’ power over nominations for prime minister and other major government positions. In his address, Putin said the moves are meant to buttress Russia’s democratic processes — though many observers find it more likely that they have to do with Putin’s as-yet-unclear plans to maintain influence after leaving the presidency.

The longtime Russian leader is currently limited by a Russian constitution that does not allow a president to serve more than two terms in a row. Previously, Putin sidestepped those term limits by sliding into the role of prime minister from 2008 to 2012, handpicking Medvedev to succeed him in office while still retaining much of his power behind the scenes.

Putin returned to the presidency in 2012 and easily won another six-year term in 2018.

Just a year or two later, the topic of term limits has once more begun to permeate conversations in Russia. Last month, during Putin’s annual marathon news conference in Moscow, the president took a question about the constitutional term limit and noted — in a nod to supporters who would like to see him remain in office past 2024 — that it “troubles some of our political analysts and public figures.”

“Well,” he added at the time, “maybe it could be removed.”

6/10 The president will be weaker, and it’s beyond doubt now (despite earlier speculation that he would somehow stay on) that that president will no longer be Putin.

The removal of the presidential term limit was not part of his package of proposed constitutional amendments; instead, the changes featured in the package would actually diminish the president’s power and ability to sidestep the limits as Putin did. The overhaul would also give more control over ministerial nominations to the State Duma, the lower chamber of Russia’s lawmaking body, the Federal Assembly.

At the same time, the plan to empower the State Council, a presidential advisory body, suggests a potential landing place for Putin after his term ends.

It also remains unclear just what this move means for Medvedev, a longtime Putin loyalist who played a key role in the president’s last grapple with constitutional term limits. According to TASS, Putin announced plans to appoint Medvedev to the newly created office of deputy head of the Russian Security Council.

“Dmitry has always been dealing with these issues,” Putin explained. “From the standpoint of enhancing our defense capability and security, I believe that it is possible and asked him to handle issues of this kind in the future.”