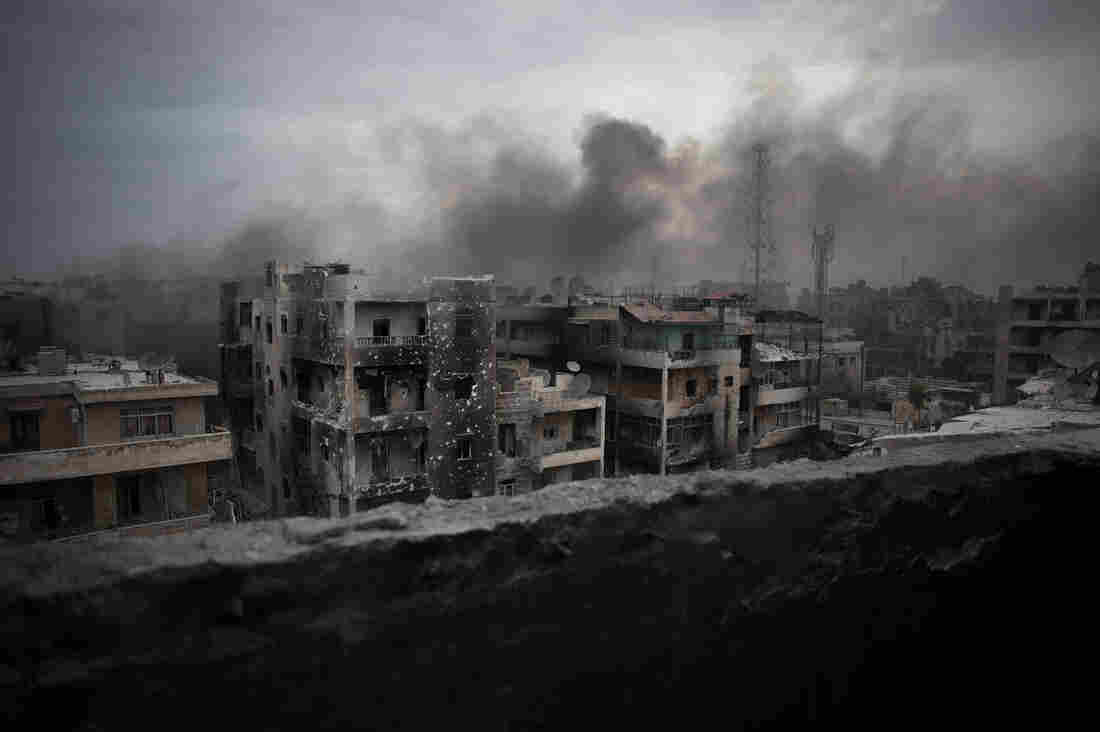 Smoke rises over Saif Al Dawla district in Aleppo, Syria, in 2012. Russia and the Syrian government say they will open humanitarian corridors in Aleppo and offer a way out for opposition fighters wanting to lay down their arms, Russian Defense Minister Sergei Shoigu said Thursday. Manu Brabo/AP hide caption

Russian and Syria have said they are opening humanitarian corridors out of besieged, rebel-held areas in the northern Syrian city of Aleppo. But NPR has reached civilians in the embattled city who turned back for fear of the ongoing shelling.

Russia’s Defense Minister Sergei Shoigu said in televised remarks Thursday that “Russia and the Syrian government will open humanitarian corridors and offer a way out for opposition fighters wanting to lay down their arms,” The Associated Press reported. Shoigu said there would be three corridors for civilian use and another for fighters seeking amnesty.

Forces loyal to the Syrian government seized the last road into rebel-held areas of Aleppo 11 days ago, effectively rendering them completely isolated, as The Two-Way has reported.

And as NPR’s Alison Meuse tells our Newscast unit, it’s still unclear whether the new “humanitarian corridors” will actually offer any respite to the besieged residents. She spoke with one resident, and has this report:

“Aleppo resident Baraa al-Halabi says he woke up to an offer on state TV. The regime listed four escape routes for people trapped on the rebel side. Halabi says via Internet call he joined a group of families headed to one of the designated corridors. But when they arrived, regime forces fired a fresh round of artillery. No one was hurt and it wasn’t clear if the shelling was targeting those fleeing, but they were too afraid to continue. They’re among 300,000 people the U.N. says are now cut off from aid in Aleppo.”

Aleppo is divided between rebel forces and troops loyal to the government. The rebel-held areas are in the east of the city.

Alison adds that the supposed offer of amnesty has been met with some skepticism. As she reports, “opposition activists say that can mean a ticket to jail, or conscription into pro-regime paramilitary groups.”

As The Two-Way reported, activists have been sounding the alarm about a possible humanitarian crisis in the besieged area. It’s just one area of Syria where aid is blocked — multiple parties have used siege tactics as a weapon of war over the course of the conflict, which is now in its sixth year.

On the diplomatic front, the U.S. is attempting to work with Russia to push forward with peace negotiations. But there are big questions about how to get there. NPR’s David Welna has explained:

“The negotiation would be to end Syria’s brutal civil war and set up a transitional government. To get there, Kerry would have the U.S. share intelligence with Russia to target airstrikes against an al-Qaida affiliate called The Nusra Front. In exchange, Russia would prevail on its ally, the regime of Bashar al-Assad, to stop bombing moderate rebel groups and civilians.”

Today, Shoigu said that “Moscow is sending a top general and experts to Geneva at the request of U.S. Secretary of State John Kerry to discuss the Aleppo crisis,” the AP reported.