Reviving The Iran Nuclear Deal: Here’s What It Involves And Why It’s Hard 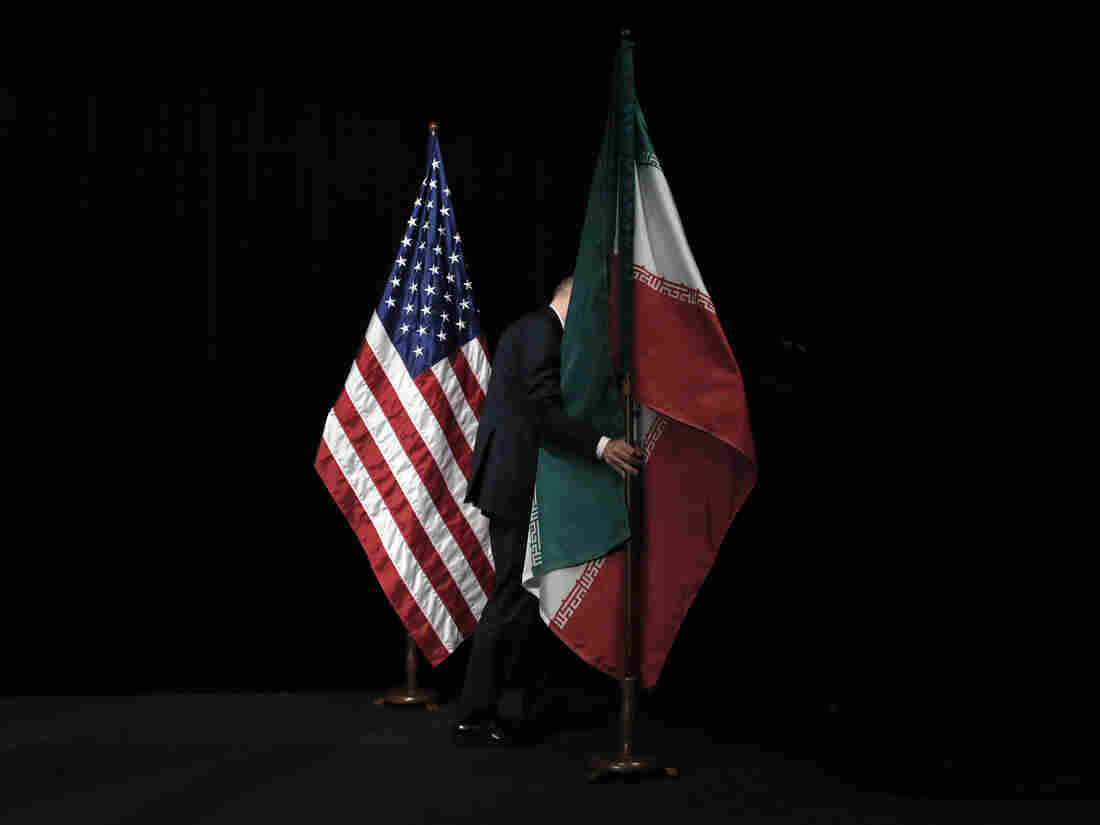 A staff person removes the Iranian flag from the stage after a group picture with foreign ministers and representatives of the Unites States, Iran, China, Russia, Britain, Germany, France and the European Union during the Iran nuclear talks in Vienna on July 14, 2015. They clinched a historic deal aimed at ensuring Iran doesn’t obtain a nuclear bomb, opening up Tehran’s stricken economy.

Both the Biden administration and Iranian leaders say they want to revive the 2015 nuclear agreement. But they’re stalled over who should take the first steps — or make the first concessions — to get there.

This week European, Russian and Chinese partners in the agreement will mediate talks in Vienna to try to bring Iran and the U.S. back in. The talks officially start Tuesday and could take days or multiple rounds.

The U.S. State Department expressed guarded optimism in a statement Friday, saying, “These remain early days, and we don’t anticipate an immediate breakthrough as there will be difficult discussions ahead. But we believe this is a healthy step forward.”

Recall that in the deal, the United States and other world powers lifted economic sanctions on Iran. The most important were U.S. bans on companies doing business with Iran or countries buying its oil. In return, Iran agreed to limit its nuclear program and allowed inspectors to monitor it from the inside.

But former President Donald Trump pulled out and reimposed sanctions — even toughening them from before. In turn, Iran started ramping its nuclear program back up, edging closer to making the kind of radioactive fuel that could be used in weapons.

Now, as the Biden administration and Iran argue over who should make the first move — that is, the U.S. removing sanctions or Iran dismantling some of its nuclear equipment — there’s risk of greater conflict. Already in February, U.S. officials said Iran-backed militias were behind sporadic rocket attacks on American troops in Iraq and President Biden ordered a retaliatory airstrike on a militia.

Here’s a review of how we got here.

Iran has long said it has a peaceful nuclear energy program. But by 2015 it was getting close to mining and processing enough of the specialized uranium needed for a bomb. The U.S., Germany, France, Britain, Russia, China, the United Nations and the European Union made a deal lifting economic sanctions on Iran, giving it access to billions of dollars in frozen assets it needed to revive its ailing economy.

In return, Iran tore out some of its nuclear equipment, let Russia cart out its uranium and allowed inspectors from the International Atomic Energy Agency (IAEA) to set up shop in Iran and install cameras in the nuclear facilities that Iran said it has.

Iran also freed some foreigners being held there in return for Iranians held in the U.S.

There were critics of the Obama administration’s agreement to the deal. They pointed out that most of the restrictions would phase out around 2026. And they noted the deal didn’t limit Iran’s nonnuclear missile program — seen as a threat to the region — or address human rights violations and Iran’s support for militant groups.

Backers of the deal countered it would be easier to work with Iran on those regional issues if the country doesn’t have the leverage that comes with nuclear weapons. The deal set back and froze Iran’s efforts to produce enough enriched uranium for a nuclear bomb. The IAEA and Trump’s secretary of defense said Iran was complying with the deal.

Trump said the deal wasn’t tough enough and, just as he reversed numerous other Obama White House policies, he broke from the deal in 2018 — breaking the U.S. commitment — and reimposed layers of sanctions.

Soon deals that U.S. companies had wanted to do with Iran — like a Boeing plan to sell it airliners — were quickly blocked. And the restrictions didn’t stop with U.S. companies. Even though other countries didn’t want to impose sanctions, the U.S. threatened to punish their companies if they did business with Iran. For example, if a French company wanted to invest in Iran, it could get cut off from using American banks or doing business in the giant U.S. economy. That scared off international trade with Iran.

The U.S. worked especially hard to block Iranian oil sales — by far the country’s biggest export — cutting them at least by half and reducing much of the trade in oil that continues to cashless barter or under-the-table arrangements.

The U.S. wasn’t able to get other countries to shut down all trade, but the Iranian economy shrank by more than 10%, driving up unemployment and poverty. And though the U.S. exempted medicine from the sanctions, international companies fear that trading medical goods with Iran could still run afoul of U.S. laws. Iranians complain of critical shortages.

Iran scaled back its nuclear program as part of the agreement, reducing both its stockpiles of nuclear material and the equipment available to make more.

When the Trump administration withdrew from the deal in 2018 and reimposed sanctions that had been lifted, Iran said it no longer was bound by the agreement. Iran began to slowly reconstitute its program, increasing its stockpiles of enriched uranium and reinstalling equipment it had mothballed. It announced these steps to the world — at one point promising to take a new step every month until sanctions were lifted. Iran’s parliament passed a law urging the government to even end the international inspections at the heart of the deal.

When the deal had been in place, Iran was roughly a year away from getting the material it would need for a nuclear weapon, should it choose to pursue one. As of February, some estimates now put that timescale at as little as three months. 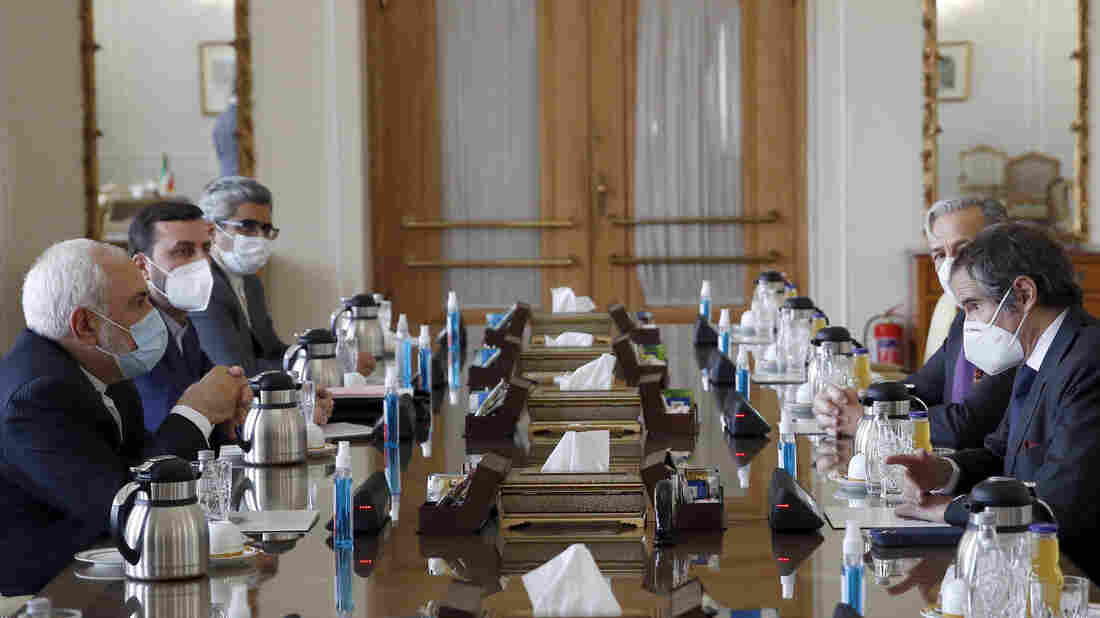 Leaders in both the U.S. and Iran will face pushback at home if they reenter the deal. After years of bashing by Trump, many Americans believe the deal was too easy on Iran. And after the U.S. abandoned its commitments in the deal, many Iranians have given up on the prosperity they once expected the deal to bring. “At the end of the day, both sides are going to have to accept that there’s going to be a political cost that they will have to pay if they want to get a deal,” Trita Parsi of the Quincy Institute for Responsible Statecraft recently told NPR’s Morning Edition.

But there are other spoilers out there. Iranian hard-liners — like the country’s powerful Revolutionary Guard Corps — have long opposed closer relations with the West. The IRGC supports some of the Iraqi militias blamed for rocket attacks on U.S. troops.

And there are U.S. allies — Israel and Saudi Arabia in particular — that view Iran as an existential threat and fear what it could do with the billions of dollars it would get from oil sales and other new business.

Though it did comply with the nuclear agreement before the U.S. pulled out, Iran still made provocative moves. It took captive some foreigners, continued developing its powerful conventional missile program, aided the repressive government in Syria and the Houthi rebels that overthrew Yemen’s pro-Saudi government.

Getting back in — who goes first?

President Biden campaigned on promises to rejoin the nuclear deal — and lift sanctions — when Iran complies with it again. And Iran says it will comply as soon as the U.S. starts letting it do business again. But they’re stuck.

Before this week’s talks were announced, administration had sought direct talks with Iran about how to do this. They indicated they might wait to verify Iran’s compliance before lifting sanctions.

Iran seemed to view that as an attempt by the U.S. to delay lifting sanctions or to change the original deal, making it a little stronger or longer — something that would help the deal go down better politically in America. “The entire nuclear deal is nonnegotiable because it was fully negotiated,” Iranian Foreign Minister Mohammad Javad Zarif told CNN. “We need to implement something that we negotiated. We do not buy the horse twice.” Iran says it will bring its program into compliance once it’s sure the U.S. has lifted sanctions.

Now the U.S. has agreed to attend the round of talks without meeting directly with Iran — but letting mediators shuttle between them.

There are ways around this the logjam. Sanctions are complex and could be eased one by one, releasing frozen money, while Iran takes steps to cut back its nuclear program again. But it will take political will on both sides and could get tougher the longer it takes — especially since Iran has presidential elections in June that hard-liners could win.

Geoff Brumfiel contributed to this report.