R. Kelly’s Federal Trial Is In The Hands Of The Jury 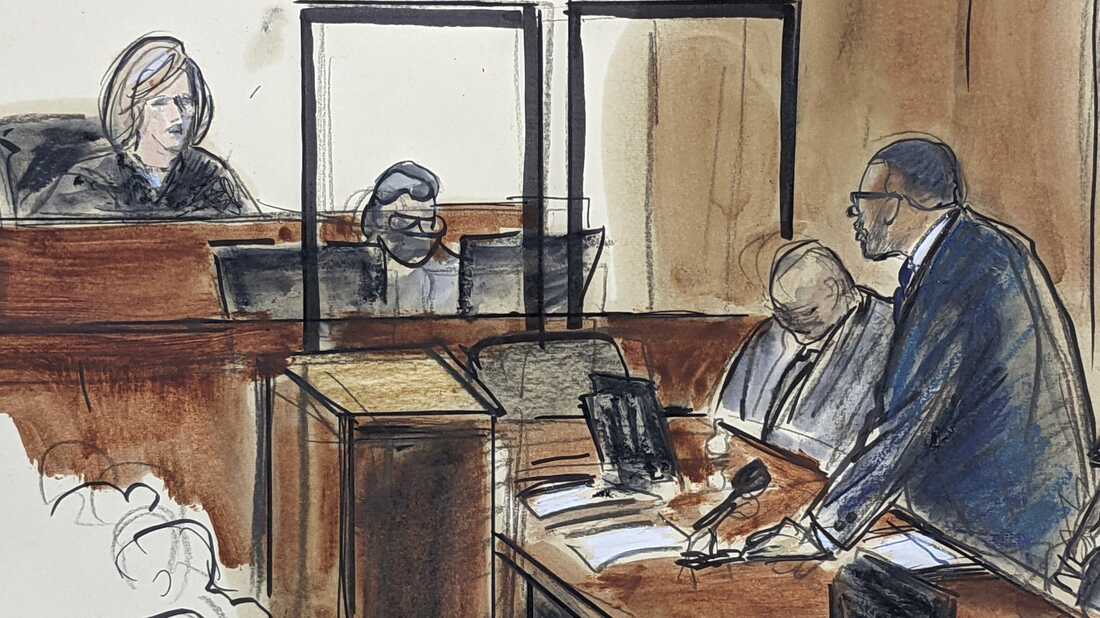 A courtroom sketch of R. Kelly telling Judge Ann M. Donnelly he won’t take the stand in his own defense.

It’s been six weeks of hearing from alleged victims, former employees and expert witnesses. Now the jury decides what’s next for R. Kelly.

Kelly — whose real name is Robert Sylvester Kelly — faces charges in a New York federal court of sexual exploitation of a child, bribery, kidnapping, forced labor, sexual trafficking across state lines and racketeering involving six victims. The racketeering charge positions him at the head of an enterprise that used his fame to lure people into becoming potential victims. Kelly, 54, has pleaded not guilty to all charges. If convicted, he faces a prison sentence of 10 years to life.

Kelly’s defense lawyer, Deveraux Cannick, painted the alleged victims as liars and opportunists in his closing argument Thursday, and said that the government allowed the witnesses to lie under oath. He called one woman in particular a “super-stalker” of Kelly and a “super-hustler.”

“A lot of people watched Surviving R. Kelly,” Cannick said, referring to the 2019 docuseries detailing sexual-abuse allegations against the artist, “and unfortunately, a lot of people are now surviving off R. Kelly.” He also argued that the government had failed to prove that Kelly led an organized criminal enterprise.

In the prosecution’s rebuttal to Cannick’s argument on Thursday afternoon, Assistant United States Attorney Nadia Shihata called the defense’s position “shameful,” saying: “It’s as if we took a time machine back to a courthouse in the 1950s. What they’re basically insinuating is that all of these women and girls were asking for it, and that they deserved what they got.”

Finishing her rebuttal on Friday morning, Shihata underscored the difference between Kelly’s celebrity and power, and the women who have accused him. “The defendant’s victims aren’t groupies or gold diggers. They’re human beings. They are daughters, sisters, some of them are now mothers,” she said. “And their lives matter.”

Shihata’s remark felt like an underscoring of the power differential between R. Kelly and the women, but also a reminder that the alleged victims are mostly Black women — and that this is the first high-profile #MeToo trial where the witnesses on the stand are largely Black women.

The vast majority of the trial was spent with the prosecution, who called 45 witnesses to the stand, including 11 alleged victims — six of whom testified that they were underage when they began having sexual encounters with Kelly.

Offering testimony that often echoed one another, the accusers described instances of Kelly attracting them with his fame, then abusing them sexually, physically and mentally, which they delineated in often graphic terms. Accusers also described Kelly directing them to have sex with him and with each other, and videotaping such encounters.

During her closing argument Wednesday and Thursday, Assistant U.S. Attorney Elizabeth Geddes walked thoroughly through each count against Kelly; her closing argument took about six and a half hours over two days, as she restated key points of evidence. Her arguments were punctuated with a large board displaying photos of Kelly and over 20 of his employees and his associates. It was reminiscent of the way government prosecutors have described mafia hierarchies to juries — but this time, it was with R. Kelly as the capo dei capi. (In 2012, 38 defendants in a Colombo crime family case that Geddes was prosecuting pleaded guilty.)

In her closing, Geddes also briefly described one of the graphic videos in evidence which the jury has seen, but not the media and public. She said that it showed Kelly grabbing one of his alleged victims by the hair and forcing her to give oral sex to another man.

“It is time to hold the defendant responsible for the pain that he inflicted on each of his victims: Aaliyah. Stephanie. Sonja. Jerhonda. Jane. And Faith,” Geddes said at the very end of her presentation on Thursday. “It is now time for the defendant to pay for his crimes. Convict him.”

By contrast, Cannick tended to appeal to the jury’s emotions in his closing argument Thursday. By turns, he invoked Dr. Martin Luther King Jr. (saying that if the jurors acquit Kelly, they would be displaying the same sort of moral courage as King), Hugh Hefner (R. Kelly’s life was similarly that of a “sex symbol, a playboy,” said Cannick) and former vice president Mike Pence (who reportedly refers to his wife as “Mother,” while R. Kelly asks his girlfriends to call him “Daddy”). He also dismissed Kelly’s marriage to the singer Aaliyah, when she was just 15 years old and he was 27, as “fluff.”

One woman, who went by “Jane” during the trial, testified that she met Kelly when she was a 17-year-old aspiring singer. She said that when she went to audition for him at a hotel in Florida, he immediately pressed her for sex. In a text message submitted as evidence by the prosecution, Kelly allegedly wrote to her: “I want to groom you and be bonded with you one hundred percent.”

A man who went by the name “Louis” on the stand told the court that Kelly began sexually assaulting him when he was a 17-year-old high school student and aspiring musician.

Kelly’s defense attorneys had brought forward only five witnesses to testify over the course of three days, beginning on Monday. Kelly did not take the stand himself, nor did any of his current or former romantic partners. Instead, the defense presented a series of men who all had worked with or for Kelly in some capacity.

Larry Hood was the defense’s first witness on Monday. A childhood friend and former Chicago police officer, he worked security for Kelly, and also recruited other CPD officers to work on the side for the star. (In his 2019 book, Soulless, journalist Jim DeRogatis writes: “I’d long heard some police officers in Chicago and Olympia Fields [a Chicago suburb where Kelly lived] worked security for Kelly, and department rules didn’t stop them from doing it or require them to tell anyone about it.”)

Hood testified that he’d never seen any underage girls with the singer. But he then went on to say that he was with Kelly when the artist first met Aaliyah, with her family at their home in Detroit, and that he saw Aaliyah and her “little friends” at Kelly’s studio. (Earlier in the trial, Kelly’s former manager, Demetrius Smith, testified to having helped organize the marriage between Kelly and Aaliyah, when the late pop star was just 15 years old; Smith bribed a public assistance office in Chicago to make a fake ID for Aaliyah.)

Hood also admitted during cross-examination that he had left the police force in 2007, in good standing and with a pension, when he was convicted of a felony forgery for passing fake $100 bills. He said on the stand during this trial that he hadn’t been aware that they were fake.

On Tuesday, the defense called to the stand John Holder, Kelly’s former accountant. Holder testified that Kelly insisted on getting paid for his concerts in cash, and then using that cash to take his girlfriends shopping. He said he was hired after the IRS audited Kelly and found that he owed the government $12 million, a sum Holder reduced to $3 million. During cross-examination, prosecutors asked Holder to explain an org chart he’d made for Kelly’s business, RSK Enterprises.

Instead of an org chart’s usual lines and boxes, however, this chart depicted a red cartoon octopus. In retrospect, the octopus was an unfortunate metaphor for a company now accused of being a “criminal enterprise” whose focus was luring girls, boys and women into sexual abuse. 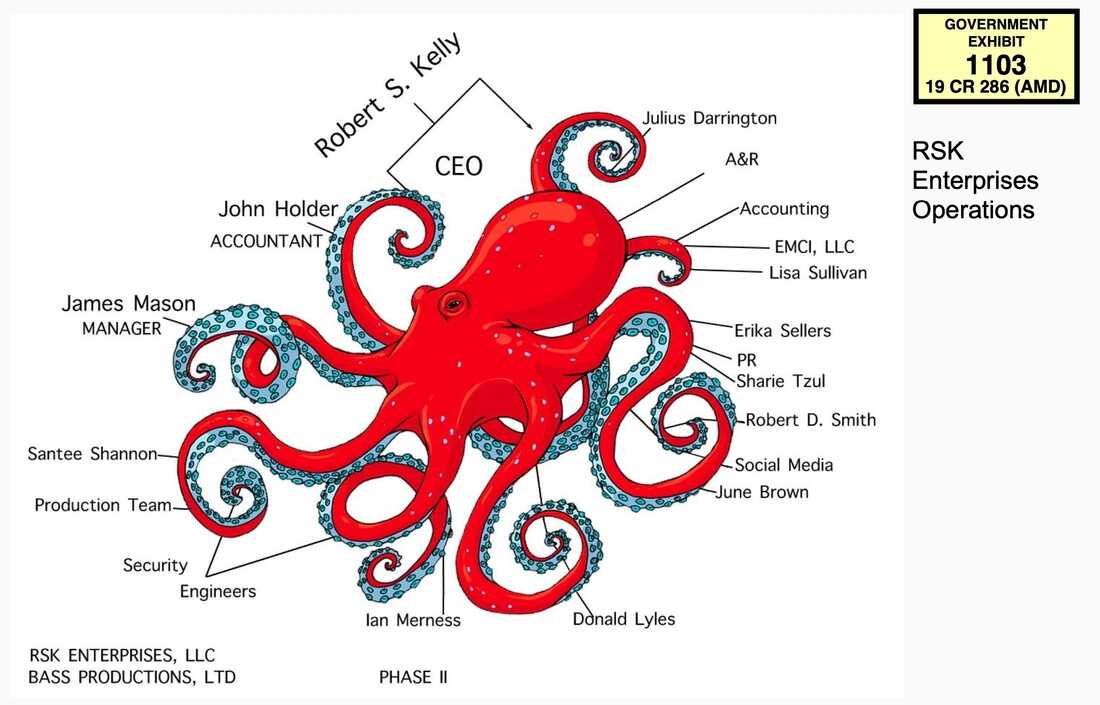 An org chart for R. Kelly’s company, RSK Enterprises, made by his former accountant.

Multiple witnesses, including former employees, testified for the prosecution that Kelly forced them into writing false letters as collateral, which they say Kelly believed would absolve him of any crimes. Employees and accusers also described the multitude of “rules” they say Kelly forced women in particular to follow, from needing to seek permission to order food to prohibiting his girlfriends to speak to other men, even during public activities such as going clothing shopping.

“He used lies, manipulation, threats, and physical abuse to dominate his victims. He used his money and public persona to hide his crimes in plain sight,” Geddes said during the prosecution’s closing arguments. She also pointed out that it’s normal for an artist to have an inner circle promoting their music and brand. “But his inner circle also served as enablers of his criminal conduct.”

Geddes also sought to point out that Kelly’s crimes were frequent and took place over decades. His abuse and subsequent marriage to Aaliyah, she said as an example, was not a single act. “After the defendant had access to Aaliyah and he surrounded her with teens that he had already been abusing,” Geddes noted, “the defendant sexually abused Aaliyah too.”

After this trial in New York ends, Kelly will head to a separate federal trial in Illinois, where he faces child pornography and obstruction charges. He also faces outstanding criminal charges in both Cook County, Ill., where he was indicted by the state attorney in Feb. 2019 on aggravated criminal sexual abuse charges involving four victims (three of them minors), and in Minnesota, where Mr. Kelly was charged in Aug. 2019 with engaging in prostitution with a minor.