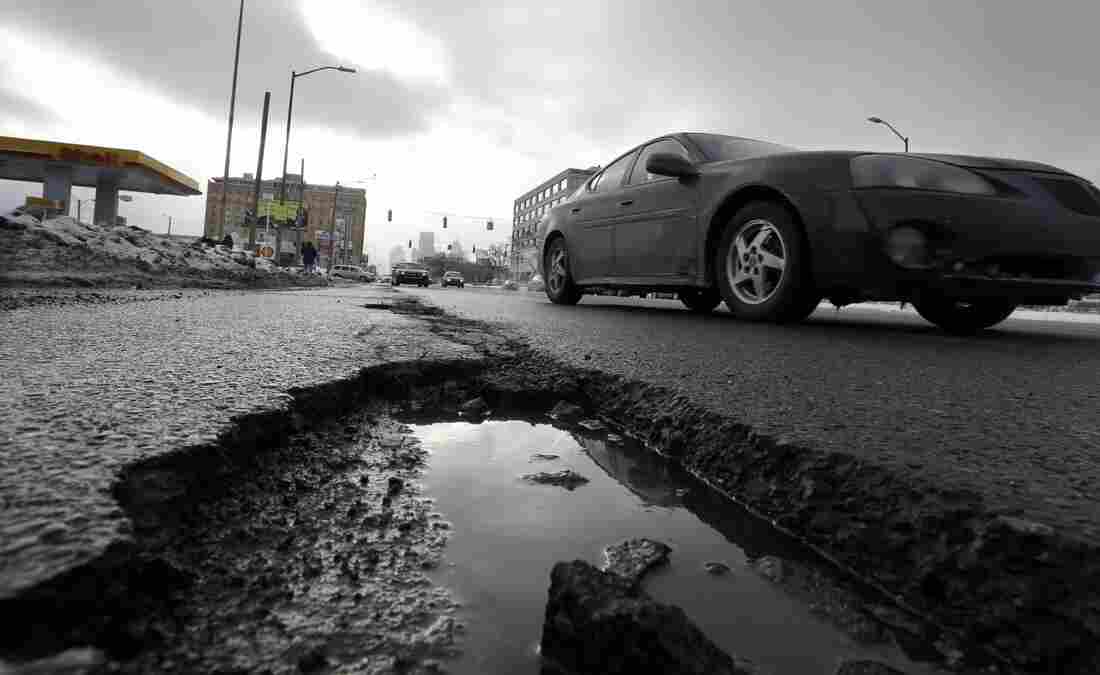 The American Society of Civil Engineers gives the nation’s infrastructure a grade of C-minus on it’s quadrennial infrastructure report card. Many of the country’s roads, bridges, airports, dams, levees and water systems are aging and in poor to mediocre condition.

Just in time for pothole season, the latest report card on the nation’s infrastructure shows that the needs are great but funding is lacking.

Many of the country’s roads, bridges, airports, dams, levees and water systems are aging and in poor to mediocre condition. And they’re in need of a major federal investment to keep from getting worse and to withstand the harsh effects of a changing climate, according to the American Society of Civil Engineers.

The group gives the nation’s infrastructure in general a grade of C-minus on it’s quadrennial infrastructure report card, up from a D-minus four years ago. ASCE says the U.S. made some modest and incremental improvements in some infrastructure categories, including railroads, drinking water systems and inland waterways and ports.

But 11 of the 17 infrastructure categories evaluated are graded in the “D” range, and as last month’s power and water failures due to brutal winter storms and extreme cold show, many infrastructure systems are increasingly susceptible to catastrophic failure.

“This not a report card anyone would be proud to take home,” said ASCE Executive Director Thomas Smith in a news release. “We have not made significant enough investments to maintain infrastructure that in some cases was built more than 50 years ago.”

Transit system in the U.S. gets the lowest grade, a D-, as some 45% of Americans lack access to transit and existing transit infrastructure, from subway tunnels to station facilities, is aging and in need to repair.

One particular concern is the condition of the nation’s bridges. According to the Infrastructure Report Card, 42% of the 617,000 bridges in the U.S. are more than 50 years old, and more than 46,000 of them are rated as structurally deficient. That doesn’t mean that they’re in danger of collapsing but indicates that they are in poor condition. The number of bridges that slipped from good condition to fair over the last four years increased, as well.

The engineers’ group says the U.S. is spending only half of what it needs to invest in infrastructure improvements just to bring systems up to par, and projects an infrastructure funding shortfall of $2.59 trillion over the next ten years.

If the country doesn’t pay its overdue infrastructure bill, ASCE estimated that the U.S. will lose $10 trillion in economic growth, and will lose more than 3 million jobs by 2039.

Crumbling infrastructure costs every American household $3,300 in hidden costs a year, according to ASCE, from lost time and increased fuel consumption while sitting in traffic jams, to extra car repairs due to poor road conditions.

“As this study shows, we risk significant economic losses, higher costs to consumers, businesses and manufacturers – and our quality of life – if we don’t act urgently,” Smith said. “When we fail to invest in infrastructure, we pay the price.”

On the campaign trail, President Biden talked about spending up to $2 trillion dollars over 10 years to upgrade the nation’s crumbling infrastructure. And there are signs that his administration could propose a comprehensive infrastructure plan as soon as this month. But both of his predecessors in the White House talked about grandiose infrastructure spending plans, too, but had little success.