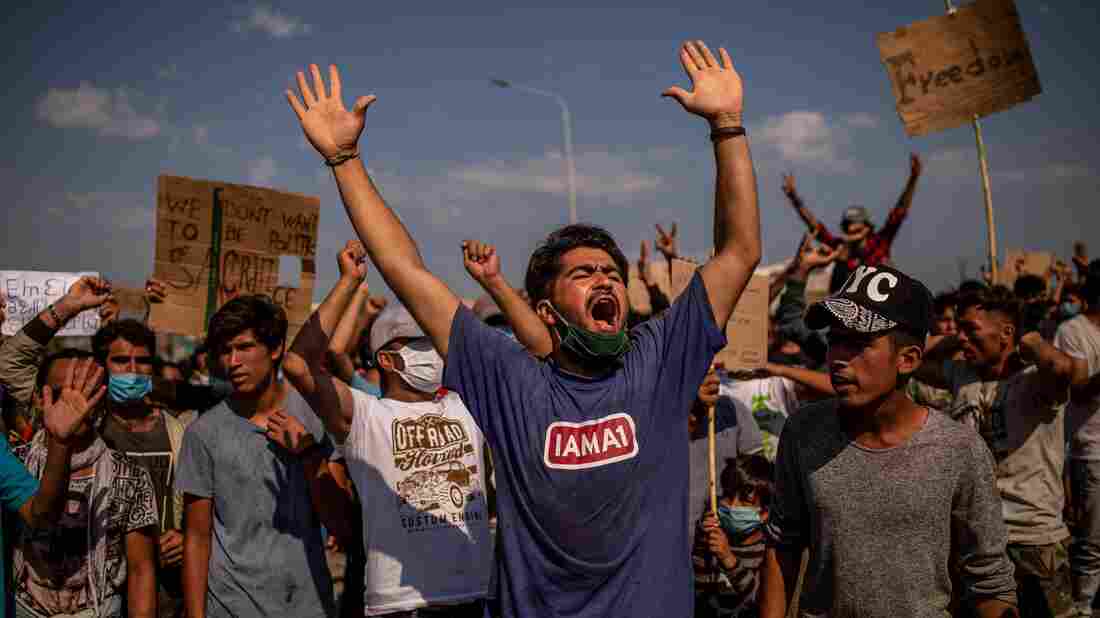 Refugees from the Moria camp protest near Mytilene on the Greek island of Lesbos on Saturday, a few days after a fire destroyed the refugee camp.

Just days after fire tore through the Moria refugee camp in the Greek island of Lesbos and displaced more than 12,000 people, some of those same people were tear-gassed by police while protesting the construction of a replacement camp.

Protesters say they want to leave the island altogether.

Hundreds of refugees gathered Saturday, some chanting “freedom” and carrying signs, while bulldozers cleared debris in preparation for a new tent settlement, Reuters reported. Police fired tear gas after some protesters tried to march to Mytilene, the island’s main city.

The new Lesbos camp, set up at an army firing range, will host about 3,000 people, according to local media. Families and members of “vulnerable groups” will get priority, government officials said. It’s not clear what will happen to the other 9,000 or so refugees.

After the fires, Greek officials relocated more than 400 unaccompanied children to mainland Greece, according to CNN. But authorities have refused mass transfer off the island, despite the pleas of refugees. Officials promised to provide safe and sanitary conditions at the new tent encampment.

The Moria camp was built to house 3,000 people but at least four times as many people have been living there.

Complicating the resettlement are fears of the coronavirus. Authorities have lost track of 35 camp residents who had tested positive for the virus, Reuters reported. And the displaced refugees have had no access to basic sanitation in the days since the Moria camp burned.

“This is a health bomb,” Matina Pagoni, president of Athens and Piraeus hospital doctors’ union, told Skai television, according to the wire service. “These people haven’t even had access to water all these days, they cannot even wash their hands.”