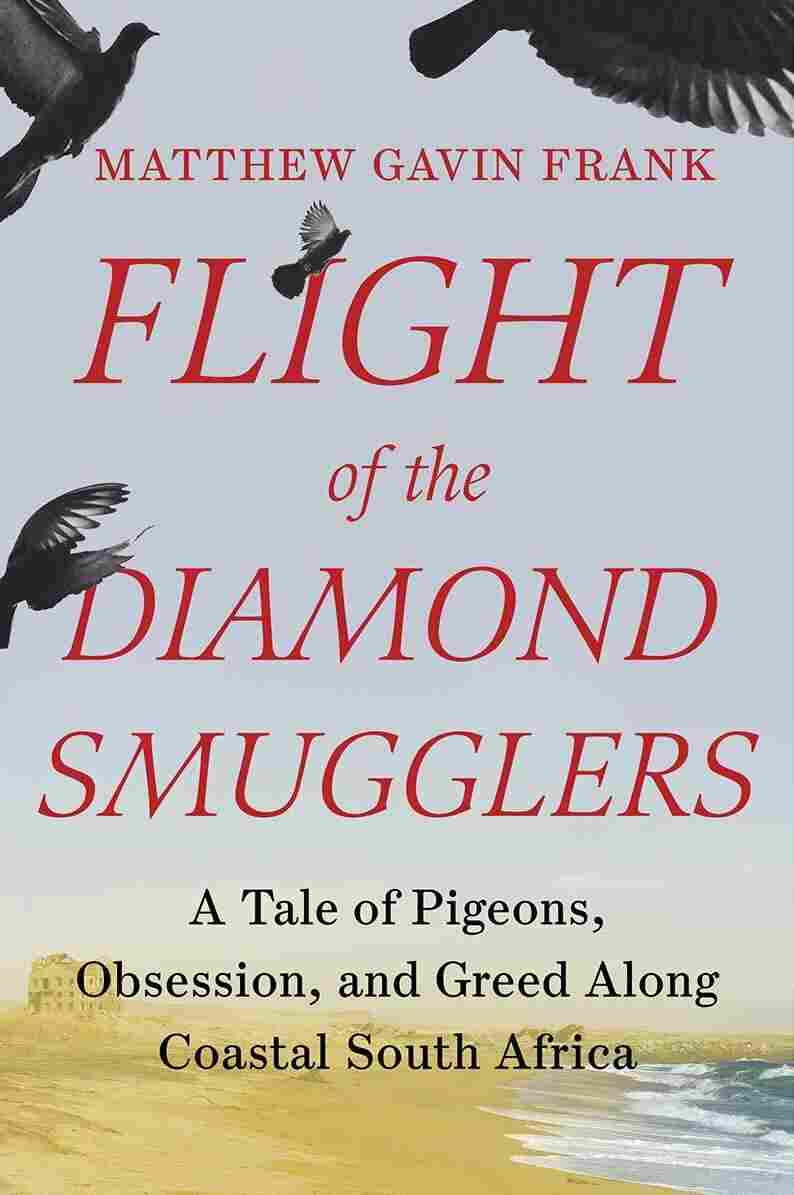 Flight of the Diamond Smugglers: A Tale of Pigeons, Obsession, and Greed Along Coastal South Africa, by Matthew Gavin Frank

Amidst a barrage of horrific news, The New York Times recently ran a story decrying shrinking rooftop spaces to raise pigeons. Pigeons, it turns out, are far more than urban pests that poop on passers-by below. They have a fascinating history spanning the globe.

Matthew Gavin Frank’s Flight of the Diamond Smugglers, set on South Africa’s Diamond Coast in the northwest part of the country, is one example. In crisp and poetic prose, Frank exposes the history of South Africa’s nefarious diamond industry accompanied by a history of pigeons. Why pigeons? They are the smugglers in the book’s title.

Frank has made a career publishing travelogues that unearth obscure history worth knowing. This book is a quirky mixture of whimsy, history, and elegy to personal loss. We may have a hunch that diamonds are a sinister business, but in Flight of the Diamond Smugglers: A Tale of Pigeons, Obsession, and Greed Along Coastal South Africa, Frank divulges completely new facets of the trade. The result is an intriguing read.

The book opens with Frank interviewing Msizi, a 13-year-old diamond miner, already sickened with diamond dust in his lungs. Msizi keeps a pigeon named Bartholomew as pet and family smuggler. Bartholomew has been trained to find Msizi’s home after Msizi sneaks him into the mine (often in his lunchbox). The diamonds tied to Bartholomew’s legs are a critical source of family income, key to Msizi’s “reparations,” including future medical care.

In the ever-escalating wars between corporate mine owner DeBeers and horrendously exploited miners, miners develop ingenious ways to get pigeons into the mines. Once inside, miners attach raw gems to various parts of pigeons’ bodies who then smuggle them out. Mining overlords use no end of violent means to prevent this — harsh punishments to miners who bring birds in, teams of sharp shooters to kill pigeons, invasive body security checks — but the game goes on. Until Msizi or Bartholomew is caught, Msizi will try to provide for his family and his future.

This scenario raises a number of questions. How do workers smuggle birds into the mines in the face of such security? Given that the practice is so well known, how can these diamonds in the rough be fenced? How many ways can miners suffer and die doing the work? And what can we learn about human deployment of pigeons throughout recorded time?

Gavin plumbs these questions and dozens of others. He takes us back to the ancient world for origin stories. He details the extinction of the dodo and the passenger pigeon, and provides intricate lessons in pigeon anatomy, including a captivating section on the mysteries of pigeons’ inborn GPS systems. Pigeon mythology doesn’t escape him either. “In the mythologies of the Blackfoot tribe, the Scottish highlands, and ancient Egypt, the pigeon is a shape-shifter which communes with the mosquito….”

Frank travels into dangerous and remote territory to investigate the interstices of the industry. His journey provides lessons on the ruthlessness of colonial rule. For example, Cecil John Rhodes (b. 1853), whose blood-spattered record stands for the evils of colonialism (so-called “founder” of Rhodesia, now Zimbabwe) created what became DeBeers. His “co-magnate, and sometimes rival, sometimes lover, was Barney Barnato” (b. 1851).

Rhodes arrived in South Africa from England as an anemic 17-year-old. When he failed to make a profit using slave labor to grow cotton, he traveled to the diamond fields of Kimberley, Frank tells us. Through family connections, he obtained financial backing to buy up all the small diamond operations by age 18. In short order, he recreated himself as an English gentleman, and began moving local labor into diggers’ camps. He established a draconian set of rules that made for insufferable and deadly working conditions.

Separately, Barnato traveled to the area, passing “ants heaping their tailings over [animal and human] corpses, the welts on his calves pulsing with insect venom,” and established a successful cigar business. With the proceeds, he began buying up diamond claims and went into formal partnership with Rhodes in 1888.

Frank spins this DeBeers origin story forward into the present, digging into the dark, secret world of mine security and investigating the grotesque human and environmental degradation that mining has wrought. At his own peril, Frank meets with various shady diamond operatives, who don’t stint at describing the violence inherent in their jobs, but who justify their isolation in the bowels of South Africa’s mining country as a life mission.

Don’t read Flight of the Diamond Smugglers if you can’t stomach learning about the myriad ways humans abuse animals and one another. On the other hand, if you resonate with keen observations and factoids, you’re likely to love the refreshing oddities that fill these pages: Isaac Newton was captivated by pigeons; Canaletto painted Venice’s famed pigeons into his skies only three times out of a lifetime of 585 paintings; in ancient Egypt, “pigeon excrement was a valuable commodity, responsible for a then-untold agricultural windfall due to the high nitrogen content in the resulting fertilizer.”

With great eloquence, Matthew Gavin Frank weaves his personal losses into a riveting cultural tapestry. If Flight of the Diamond Smugglers induces justified discomfort about the dirty business of diamonds, it also rewards with a panoramic view of an ancient and mysterious trade.