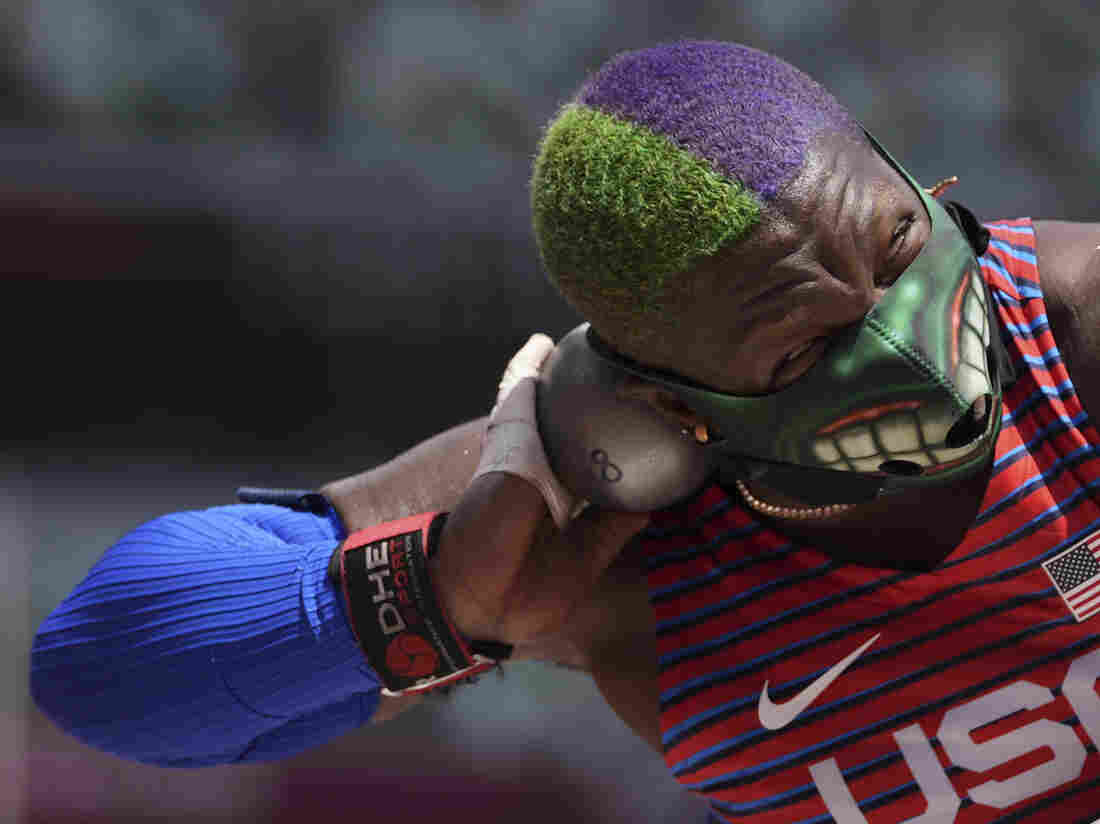 U.S. shot putter Raven Saunders competes in the final at the Summer Olympics on Sunday in Tokyo.

When U.S. shot putter Raven Saunders is competing, she calls herself the “Hulk.” It’s the alter ego that bursts onto the field to fight for championships.

Saunders — with the help of her “Hulk” persona — took silver in the women’s shot put final at the Tokyo Summer Olympics. She hurled the heavy ball 19.79 meters, or nearly 65 feet. It’s the third medal ever for the U.S. in the women’s event and it’s Saunders’ first.

“I remember my first Olympics, being able to watch Michelle Carter come out here and, you know, get it done,” she said, referring to the U.S. female gold medalist in shot put at the 2016 Games. “I made sure that when I came out from 2016, constantly fighting and constantly pushing through everything, I made sure I walked away with a medal.”

It was a long journey to Tokyo for Saunders, after years of openly struggling with depression following the Olympics in Rio de Janeiro and then leaving the world stage to return to normal life. She was hospitalized, she suffered through injuries and then got a second chance to compete on the world stage.

Saunders said she’s been so open about her mental health struggles so others don’t feel alone. It’s also why she wears her identities so proudly as a gay Black woman.

In Tokyo, she’s taken the social media world by storm with her colorful looks and larger-than-life persona. After winning her medal, she vogued with the American Flag on the field, then walked off singing, “Celebrate good times, come on!” Raven Saunders celebrates after her second place finish in the final of the women’s shot put.

During competition, she was decked out in shades of green: green and white Air Jordan 13s, green and purple hair, and her signature Hulk mask that puts her in the mode to “smash.” Her comic book alter ego is fun, but it’s also a way to separate Raven the competitor and Raven the person.

“I had a tough time differentiating between the two,” she said after her competition. “But through my journey, especially dealing with mental health and things like that, I learned how to compartmentalize the same way Bruce Banner learned how to control the Hulk… a sign of mental peace when he wasn’t the Hulk.” In the comic books, scientist Bruce Banner must find ways to harness his super-strong, out-of-control alter ego.

The Charleston, S.C. native loves the attention she’s gotten for her look and for her sport. But eventually, she says, the attention will die down.

“I kind of learned my value outside of the sport,” she said. “I know that the medal, it’s cool. It’s a bonus. It’s a plus. But really, the thing that I’m most excited about is constantly, you know, inspiring and pushing people and really still being an advocate for my community.”

“I’m part of a lot of communities, God dang.”

She laughs. She wants to represent them all.