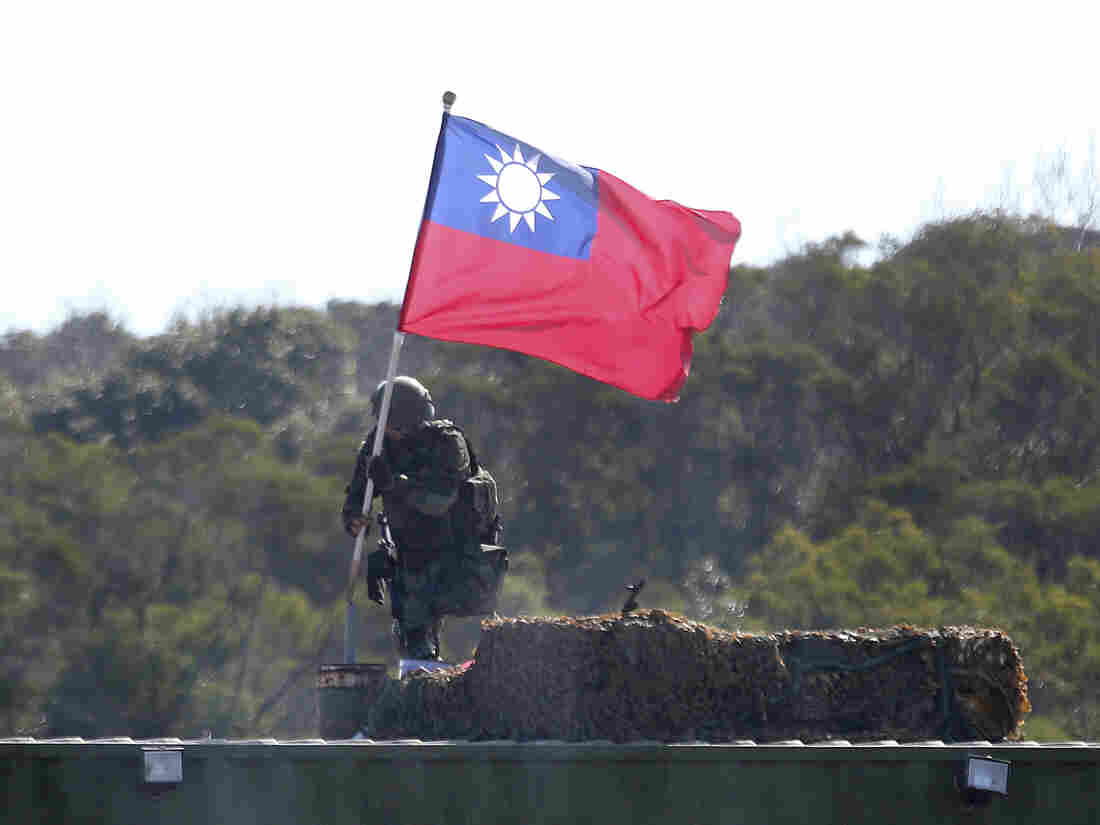 A soldier holds a Taiwanese flag during a military exercise in Hsinchu County, northern Taiwan, in January. Taiwanese troops using tanks, mortars and small arms staged a drill aimed at repelling an attack from China.

Richard Bush (@RichardBushIII) retired from the Brookings Institution in 2020, after 18 years as a senior fellow and serving as director of its Center for East Asia Policy Studies. Bonnie Glaser (@BonnieGlaser) is director of the China Power Project at the Center for Strategic and International Studies. Ryan Hass (@ryanl_hass), a former foreign service officer, served on the National Security Council in the Obama administration and is a senior fellow at the Brookings Institution.

A growing chorus of officials and experts in the United States has been raising alarm about the risk of a Chinese attack against Taiwan. Adm. Philip S. Davidson, the United States Indo-Pacific commander, recently handicapped the threat of a Chinese assault on Taiwan as “manifest during this decade, in fact, in the next six years.” China is preparing to invade and unify Taiwan by force, the thinking goes, as soon as it gains the capabilities to do so. Such doomsday predictions deserve interrogation.

China’s actions no doubt have earned scrutiny. In recent years, Beijing has grown impatiently aggressive in pursuit of its ambitions. China has drawn blood along the contested Indian border, threatened Vietnam, expanded its military presence in the South China Sea, increased the tempo of its operations near the Senkaku Islands and trampled Hong Kong’s autonomy — to say nothing of the atrocities it is perpetrating against its own citizens in Xinjiang and elsewhere.

Beijing also is investing considerably in military capabilities that could be employed in a Taiwan contingency. China has gone on a naval shipbuilding surge in recent years, surpassing the U.S. Navy by a count of hulls. Robert S. Ross of Boston College estimates that the Chinese Navy already has more than 300 ships, while the U.S. Navy has around 280.

China is marshaling its full range of capabilities to intensify pressure on Taiwan below the threshold of conflict. People’s Liberation Army forces now operate all around Taiwan. They also have been conducting highly publicized amphibious assault exercises and air penetrations of Taiwan’s air defense identification zone at the highest frequency in nearly 25 years.

Contributing to Beijing’s unfriendly treatment of Taiwan was its perception that the Trump administration showed stronger support for the island’s government, thus reducing any incentive that Taipei had to submit to its demands. Trump officials took initiatives mainly in the diplomatic and security realms, and they did buoy Taiwan’s confidence. The Biden administration has shown broad continuity in support for Taiwan during its first months.

As troubling as the trend-lines of Chinese behavior are, it would be a mistake to infer that they represent a prelude to an unalterable catastrophe. China’s top priority now and in the foreseeable future is to deter Taiwan independence rather than compel unification. Beijing remains confident in its capacity to achieve this near-term objective, even as it sets the groundwork for its long-term goal of unification. Indeed, based on polling on attitudes regarding defense, we believe the people of Taiwan already are sober to the risks of pursuing independence.

China’s leaders also have employed sharp rhetoric, though some of it has been exaggerated. Too much is made of President Xi Jinping’s declaration not to pass down cross-strait divisions to future generations. Every Chinese leader since Mao Zedong has projected determination to unify Taiwan with the mainland. Xi is no different. And Xi, now 67, will not likely be around to see if Taiwan is unified with the mainland by the putative deadline, the 100-year anniversary of the founding of the People’s Republic of China in 2049.

While it is true that some in China have concluded that time is no longer on China’s side and Beijing should use force to compel unification, Xi has resisted such pressure. In the latest five-year plan, launched this year, Beijing reaffirmed the policy guideline of pursuing “peaceful development of cross-strait relations,” continuing a line tracing back to the era of Hu Jintao, China’s president from 2003 to 2013.

Beijing has its own incentives to avoid war. Foremost among them is that any attempt to take Taiwan by force would very likely invite a military conflict with the United States. Such a conflict would be difficult to limit from escalating or spreading beyond the Taiwan Strait.

Under such circumstances, Beijing could not be assured of absolute victory, and anything short of quick and absolute unification would risk undermining Chinese Communist Party legitimacy at home. China’s use of force against Taiwan also would poison China’s image in the region and the world, alert neighboring countries to the threat China poses to stability and lead to diversion of resources and focus from Xi’s pressing domestic priorities.

Given the unattractiveness of these options, it is little surprise that China has chosen a different path. In recent years, Beijing has unveiled a broad range of tools to deter Taiwan’s independence and gradually weaken the will of the people of Taiwan to resist integration with the mainland.

Beijing’s goal is to constantly remind Taiwan’s people of its growing power, induce pessimism about Taiwan’s future, deepen splits within the island’s political system and show that outside powers are impotent to counter its flexes.

Its approach is guided by the Chinese aphorism, “Once ripe, the melon will drop from its stem.” This strategy may require more time than war, but it would come at less cost and risk to Beijing.

Coercion without violence is not just a threat; it’s an everyday reality. China does pose a kinetic threat to Taiwan, and Taiwan and the United States must strengthen their capacity to deter war. But the proximate threat is not just military, it’s also psychological.

Hyping the threat that China poses to Taiwan does Beijing’s work for it. Taiwan’s people need reasons for confidence in their own future, not just reminders of their vulnerabilities.

If American policy makers want to help Taiwan, they will need to go beyond focusing on the military threat. They need to modernize the U.S.-Taiwan economic relationship, help Taiwan diversify its trade ties and provide platforms for Taiwan to earn dignity and respect on the world stage.

Some of the work necessarily will be security-focused, but that is the start, not the end, of what needs to be done. Beijing will object, of course. But a focus on economic and diplomatic initiatives lies well within the United States’ one-China policy, as successive administrations have defined it.