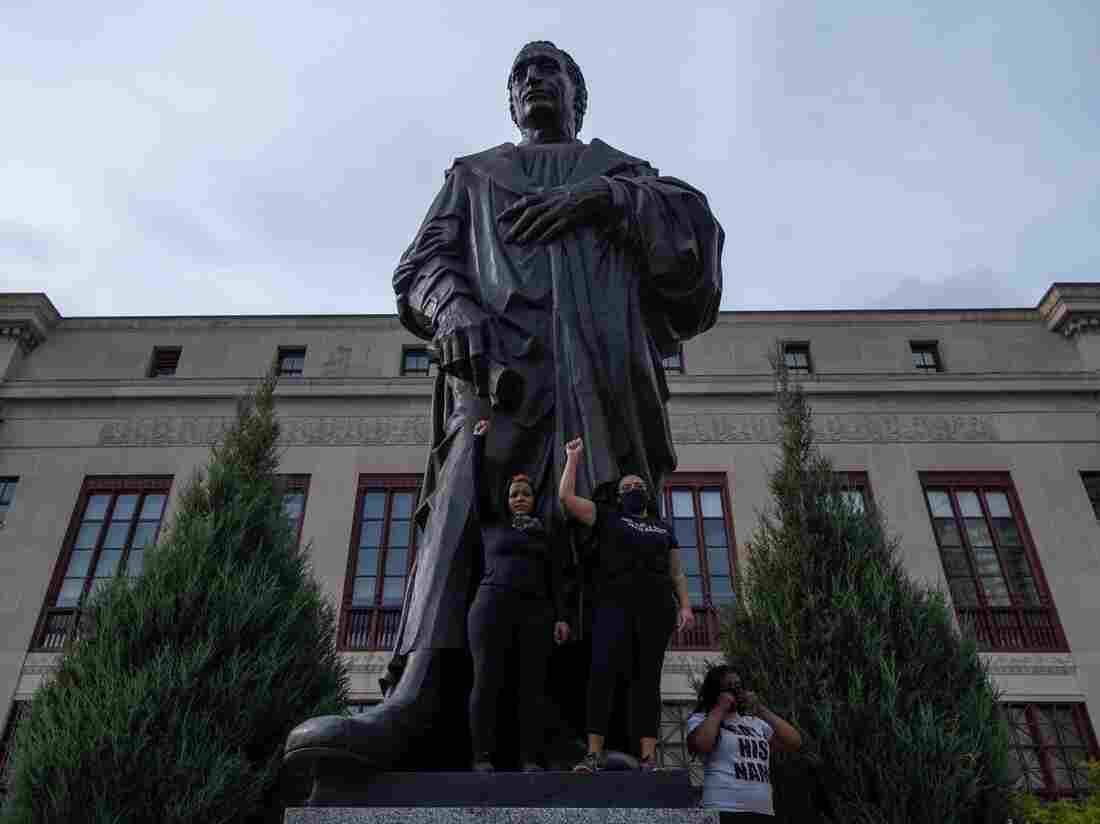 Protesters raise their fists as they stand on the base of a statue of Christopher Columbus in front of City Hall during an “International March for Black Lives” protest against police brutality in downtown Columbus, Ohio, on June 27.

St. Louis, St. Paul, Richmond, Boston — cities across the country have dismantled, torn down or removed their statues honoring the explorer Christopher Columbus. One of the more recent and more surprising additions to that list is his namesake: Columbus, Ohio. The city once had three Christopher Columbus statues.

Construction crews recently dismantled a marble statue on the campus of Columbus State Community College, loading it piece by piece onto a flatbed truck to be put into storage.

A small Columbus statue still stands on the lawn of the statehouse.

And there’s a third that is by far the most imposing — a more than 20-foot-tall mixed metal Chrisopher Columbus, draped in robes, towering over city hall.

“There’s really hard meaningful work to be done to change policing and end systemic racism. But along the way we have to recognize that symbols matter,” she says. “And this giant symbol on city hall’s front lawn, celebrating a man who brutalized and murdered indigenous people just doesn’t make sense.”

Columbus Mayor Andrew Ginther says the City Hall statue will be taken down, too. He called for a review of all public art, including the city’s seal and flag which show the ship, the Santa Maria.

“The people of Columbus have been very clear about what kind of community they want to live in,” Ginther says. “One that is diverse, inclusive, and we will be able to define our community that way, not by history or statues.”

But some people think removing the statue goes too far.

“You can’t just throw it under the rug and say ‘We’re not standing for this, you gotta hide this.'” says Larry Pishitelli, a local Italian immigrant. “It’s our heritage. Like it or not it’s how we got here.”

Joseph V. Scelsa runs the Italian American museum in New York City, and argues that the statues are being used as political pawns to placate those asking for systemic change.

“Racism is the sin of the Americas, there’s no question about that,” Scelsa says. “And he’s become a convenient target for people to vent out their frustration.”

He says cities can remove the statues all they want, but they won’t be able to erase Columbus completely — there are countless schools, universities, streets and cities named after him.

Columbus resident Shelly Corbin is part of the Cheyenne River Sioux Tribe. For her, Christopher Columbus represents violence against all people of color. She credits the size and momentum of the Black Lives Matter movement for finally bringing the statues down.

“The Indigenous communities are very small,” Corbin says. “And so the Black Lives Matter movement is happening, we can align, and we can support, and we can stand in solidarity and say hey, we’re fighting the same fight.”

But it is much easier to change symbols than it is to make meaningful structural changes. Columbus has a high infant mortality rate for black babies, more COVID-19 cases in black communities, and the highest number of police shootings of black residents of any city in Ohio.

After the death of George Floyd, thousands of people have taken to the streets to ask for the Columbus Police Department to be reformed, or even defunded altogether. Peaceful protests have been met with pepper spray and tear gas, even after the mayor banned their usage.

Community organizer Jasmine Ayers says removing statues won’t address those problems. But despite all they represent, she is still attached to the name Columbus.

“The people here are nice they will pull over on the side of the road and help you change your tire,” she says. “So I think I associate the people with the name, and not Christopher Columbus.”

But some residents will continue to try to turn the concept of “Columbus” on its head, she says, by resettling refugees, celebrating black culture and continuing to push for reforms throughout the city.