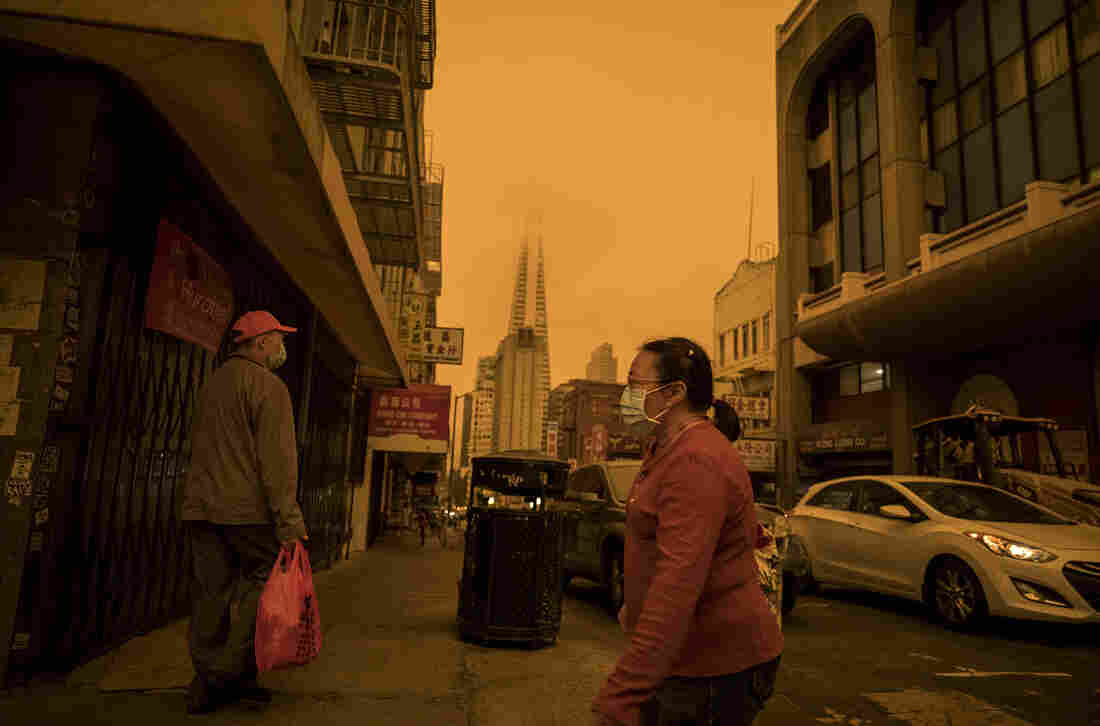 Pollution is a global problem. Above: Stockton Street in the Chinatown district of San Francisco on Sept. 9, a time when air quality was affected by wind and wildfires.

As wildfires raged up and down the Pacific Coast last month, families across California and Oregon lived in – and breathed in — smoky, toxic air for weeks. Many days, the region’s air quality ranked among the worst in the world.

Officials warned residents that the air pollution could exacerbate many health issues, such cardiovascular disease, asthma and other respiratory diseases. And it could increase the risk catching COVID-19.

But what about the youngest members of society? How does air pollution affect pregnant women and their newborn babies?

Now an international team of researchers have a better understanding of that answer. Air pollution, both inside and outside the home, contributed to the deaths of about 500,000 newborns in 2019, the team reports in the State of Global Air 2020.

“The number is just staggering,” says epidemiologist Rakesh Ghosh at the University of California, San Francisco, who led the study. Each year about 2.42 million infants die within the first 27 days of life. The new study suggests air pollutions contribute to about 20% of those deaths

Most of these deaths occurred in poor countries, with nearly half in sub-Saharan Africa. And about two-thirds of the deaths were associated with air pollution inside of people’s homes, when they burn coal and wood to cook or stay warm. But pediatrician Susan Niermeyer says the air pollution problem is, by no means, exclusive to low-income regions or where people cook with hard fuels.

“I think you can easily dismiss this finding as something that only happens to people who live far away in thatched roof houses and not to us,” says Niermeyer, a professor at the University of Colorado Medicine. “But air pollution effects our babies, as well.”

For example, families who live right near a highway can be exposed to large amounts of fine particulates, called PM 2.5, and carbon monoxide, Niermeyer says. And several studies have clearly linked air pollution exposure around airports to an increased risk of premature birth here in the U.S.

Fine particulates, or PM 2.5, are especially dangerous forms of pollution because the particles are small enough to reach deep into a person’s lungs and even absorb into the bloodstream, as well.

Once inside the bloodstream of a pregnant woman, PM 2.5 pollutants may behave like tobacco smoke. They can trigger inflammation in the blood, which, in turn, can decrease the transfer of oxygen and nutrients across the placenta, Niermeyer says. “This inflammation can impact growth of the fetus. And if it’s significant enough, inflammation can trigger preterm labor.”

In the new research, Rakesh Ghosh and colleagues analyzed data from more than 20 studies, which linked exposure to PM 2.5 during pregnancy to an increase risk of giving birth prematurely or to a low-weight baby (that is, a baby weighing less than 5.5 pounds). Both conditions reduce a child’s chance of surviving the first month of life.

For each 10 unit increase in PM 2.5 over the course of pregnancy, a woman’s risk of giving birth to a low-weight baby increases by about 6%, Ghosh and his team report in the journal The Lancet.

“This risk might appear small,” Ghosh says, “but when you multiply that 6% by the enormous amount of exposure that moms have in some countries, their risk multiples by orders of magnitude.”

The findings raise awareness about an invisible killer of newborns, says epidemiologist Xueying Zhang at the Icahn School of Medicine at Mount Sinai.

“Doctors will never say person died of air pollution,” Zhang says. “They will say the cause of death is cancer, a stroke or respiratory disease. But air pollution is an important cause of cancer, strokes and respiratory syndromes.”

And with this new report, policy makers and health officials can see that air pollution is also an important cause of premature and low-weight births. “Once people see how much air pollution threatens babies, they are more likely to look for ways to protect them.”

And a first step could be as simple as teaching families that cooking over coal fires could be as harmful as tobacco smoke. Then, says Zhang, perhaps they will be more likely to switch to cleaner fuels or better ventilate their homes.