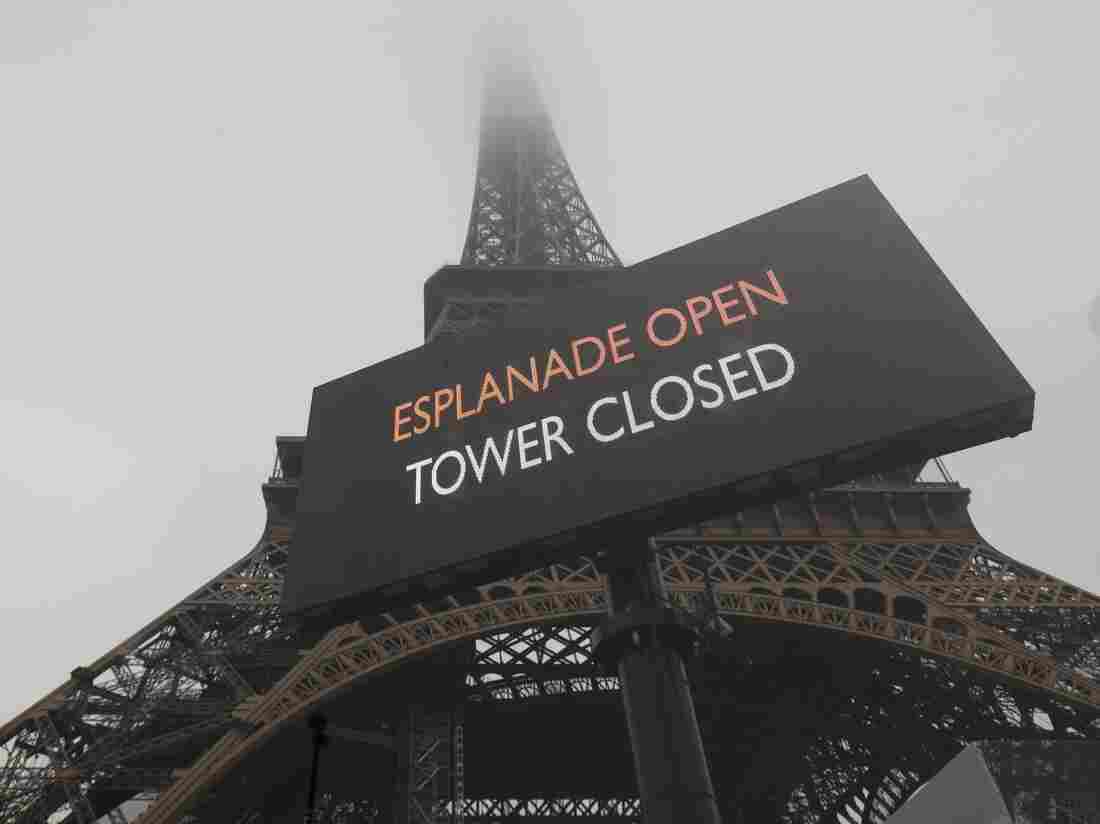 Wide social protests forced the Eiffel Tower to be closed in Paris on Thursday, as demonstrators mounted a strike against the government’s plans for a pension system that critics say will force millions of people to work longer.

Thousands of people are marching in the streets of Paris, Lyon, Marseilles and other French cities Thursday, as more than 30 unions launch a massive workers’ strike that’s meant to shut down the country and force President Emmanuel Macron to reevaluate his plans for pension reform.

The strike is being compared to the crippling protests of 1995, which were also triggered by a retirement reform effort and which unraveled the career of former Prime Minister Alain Juppé.

The Eiffel Tower is shut down; so are most of the light rail lines in Paris. And some of the city’s busiest streets were quiet, as commuters either took part in the general strike or made plans to avoid travel disruptions.

More than 280,000 people demonstrated in about 40 cities — excluding Paris and Lyon, where estimates were not yet available — according to Le Parisien, which cites the AFP news agency. 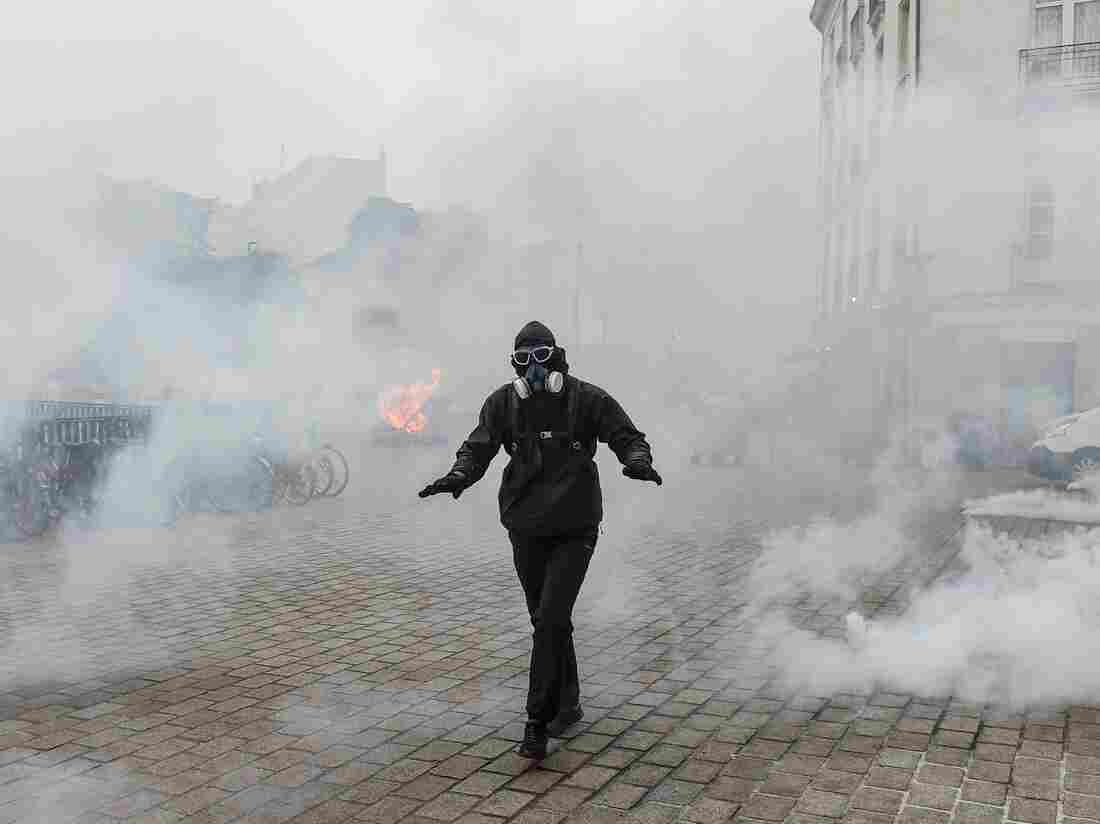 A protester walks through a cloud of tear gas during a demonstration against national pension changes in Nantes, France, on Thursday.

Faced with severe air travel disruptions, France’s civil aviation directorate says that on Friday, 20% of all flights going in and out of Paris and other large cities will be canceled.

While many of the demonstrations took place peacefully, police deployed canisters of tear gas in Bordeaux after a brief but tense standoff at the Place des Quinconces, a huge city square where the march was slated to end. The government estimates some 20,000 people were in the street, as news site 20 minutes reports.

A similar scene played out in Nantes, where journalist Christian Meas described the police playing a game of chat et souris (cat and mouse) with protesters.

France’s national railway company, SNCF, says that on average, only 1 in 10 trains is running on its most popular lines, including the high-speed TGV train.

Demonstrations and severe disruptions are expected to last at least through Monday — the date being mentioned by both the SNCF and key transport unions.

In Paris, NPR’s Eleanor Beardsley reports the streets were eerily calm early Thursday, feeling more like a Sunday morning than a weekday.

Transport workers, hospital employees, firefighters, teachers and others who play key roles in society are taking part in the strike, sending a warning to Macron to preserve their pensions under France’s national system despite growing economic challenges.

“People are living longer, and there are fewer workers supporting each retiree,” Beardsley says on Morning Edition. “It needs reforming. People know this, but they say his reform is bad and unfair. He wants people to work longer — people do not want to have to work longer.”

France’s official retirement age is 62, having risen from 60 in the past decade. But the government hopes to install a new universal points-based pension system, which would change how pensions are calculated and effectively give full pension benefits only to workers who retire at age 64.

But beyond the push to preserve current pension terms, the protests also reflect “an anger and a dislike of Macron in society,” Beardsley says, noting the criticisms the president has faced in the wake of the Yellow Vest cost-of-living protests of last autumn. 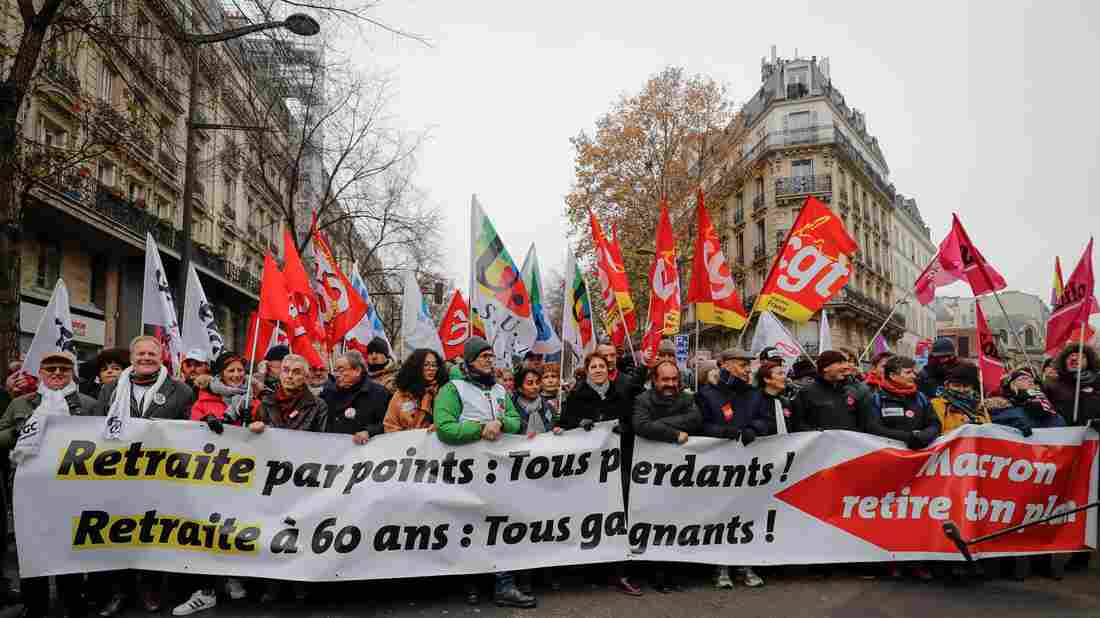 People hold a banner reading “Pension by points: we all lose. Retirement at 60: we all win” during a demonstration against a plan to overhaul national pensions in Paris.

While thousands of police were deployed to secure areas around the protests, Le Figaro journalist Jean-Baptiste de la Torre spoke to three policemen who said they had turned out to show what support they could.

“We are here for our children,” one officer said. While acknowledging orders against joining the strike and march, the officer added, “We wanted to support our women who are teachers.”