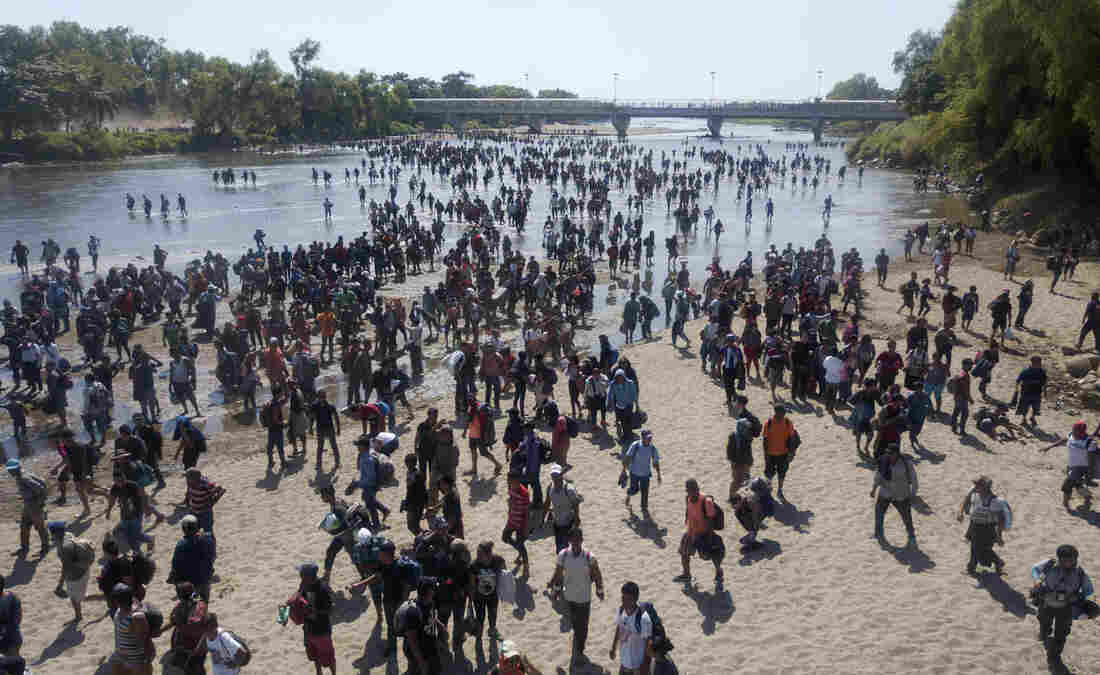 Hundreds of migrants from Central America on Monday moved off a closed border bridge and waded across the Suchiate River at the Guatemala-Mexico border after Mexican officials informed the group they would not be permitted to move farther into the country.

With the river low from the dry season, migrants were able to cross but were met with the Mexico’s National Guard lining the river’s banks on the other side.

The caravan of migrants are now on Mexican territory and are being prevented from transiting through the country by scores of armed Mexican National Guard members, some outfitted in riot gear, who are under orders from government officials to block their entry.

At least 4,000 people who hoped to travel northward to the U.S. entered Guatemala from Honduras last week, according to the Guatemalan government. The migrants threatened to enter by force if authorities refuse to allow that. But now, in Mexico, security officials apparently are not planning to budge.

Brayan Hernandez, 26, was carrying his 1-year-old baby, Daisy, when he approached the river.

“It’s more scary [to cross the river] when you’re with your child but we don’t have any other option,” he said. “I never expected Mexico to react like this. It makes me angry. We didn’t attack them,” he said.

Hernandez added: “Our goal is to go to the United States. We aren’t turning around here.” 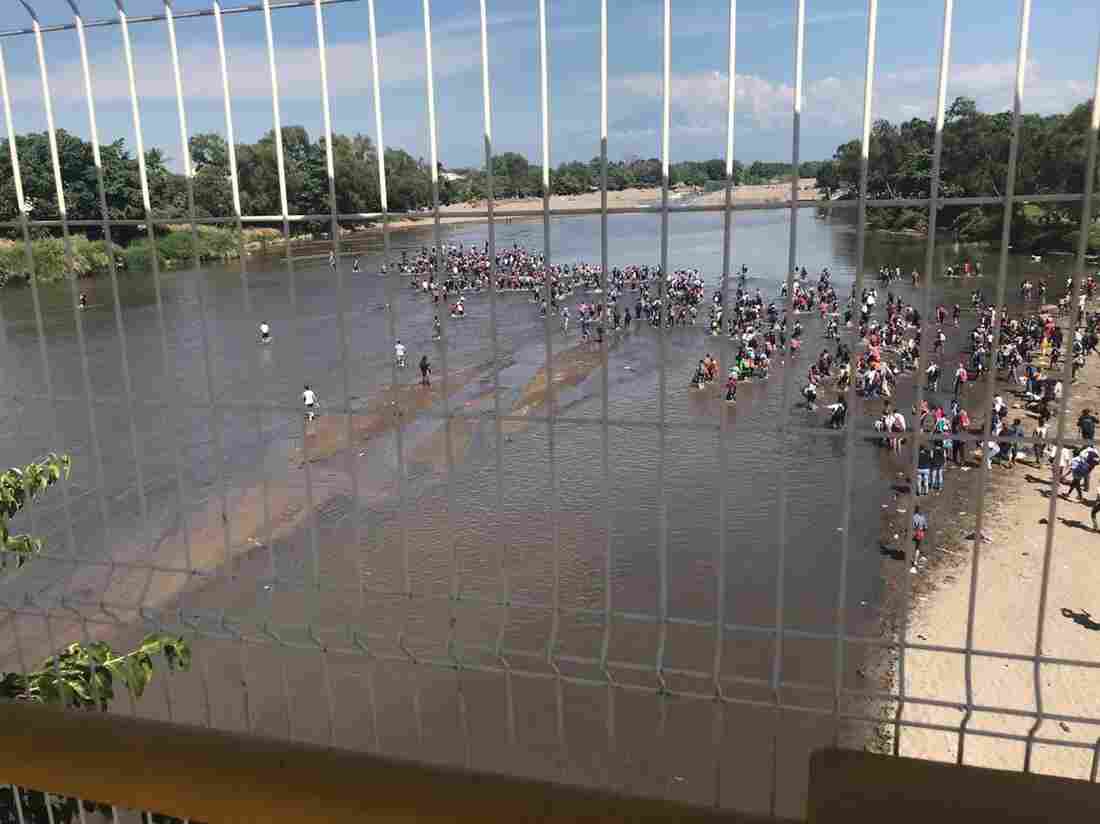 The migrant caravan hopes to eventually make it to the U.S., but Mexican troops are blocking the group from continuing their journey.

It is unclear how the standoff between the large group of migrants and Mexican National Guard members will end, but many of the migrants say they are determined to make it into the country somehow.

The latest showdown between Central American migrants and Mexico’s border enforcers comes after the Mexican government told the Trump administration it would clamp down on migration flows toward Mexico’s border with the U.S. Trump has threatened to impose economic sanctions on Mexico if it doesn’t crack down harder on migrants.

Jessica Corrales Torres, 40, and her 12-year-old daughter were among those prevented from moving through Mexico. Having her journey cut short, she said, is dispiriting.

“It’s hard, very hard. There are not a lot of jobs. There’s a lot of crime. It’s insecure more than anything else,” Corrales said of her home country of Honduras. “It’s horrible.”

She adds: “If you could go to the U.S., who wouldn’t? But if not, I’ll settle for anywhere I can find work.”

But she and the other migrants have been confused by mixed messages from Mexico’s top officials. Mexican President Andrés Manuel López Obrador said at a press conference recently that there are more than 4,000 jobs available for migrants in the caravan, only to later say that most of the migrants who hand themselves into authorities will actually be deported. 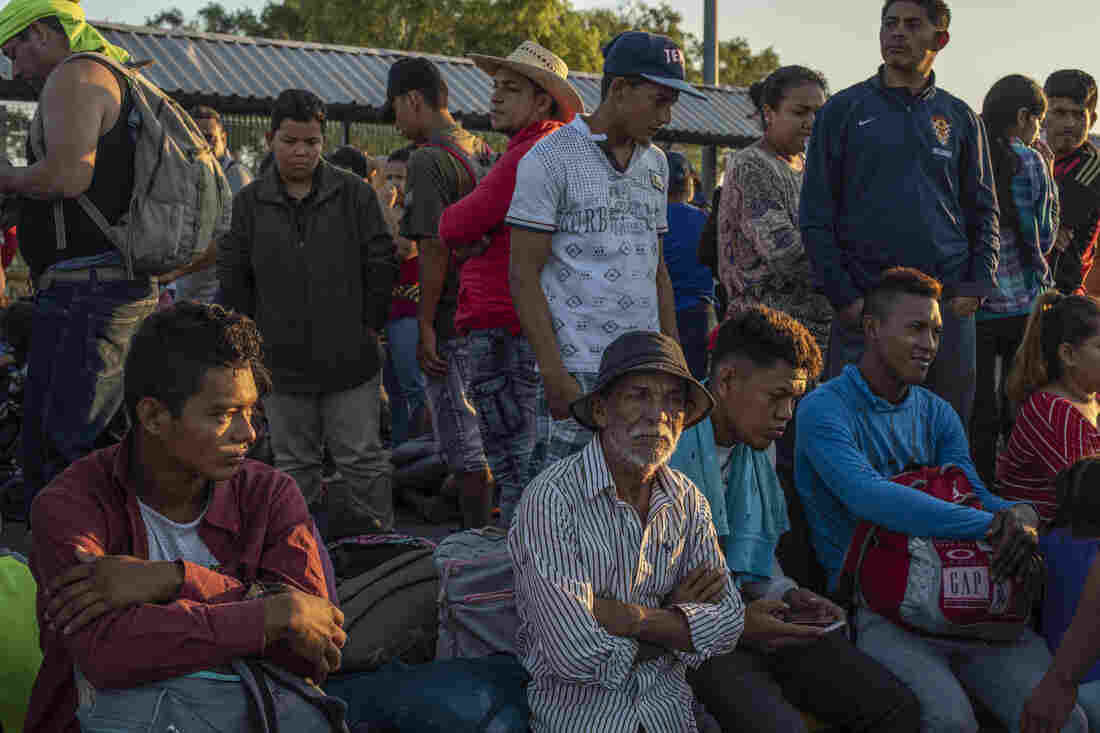 On Saturday, tensions flared between migrants hoping to make a journey to the U.S. and Mexican troops, who used pepper spray and shut a large metal gate at the crossing to thwart the group. There were fewer confrontations on Monday, though both migrants and Mexican National Guard members were seen tossing rocks at each other.

So far, Mexican authorities have protected the border more successfully than in 2018, when a caravan of some 8,000 people, many fleeing violence, persecution and poverty, crossed the border illegally, grabbing the attention of Trump, who has called large caravans of migrants “an invasion.”

The president has used the image of migrant caravans as part of the reason to spend billions of dollars to erect a border wall with Mexico. 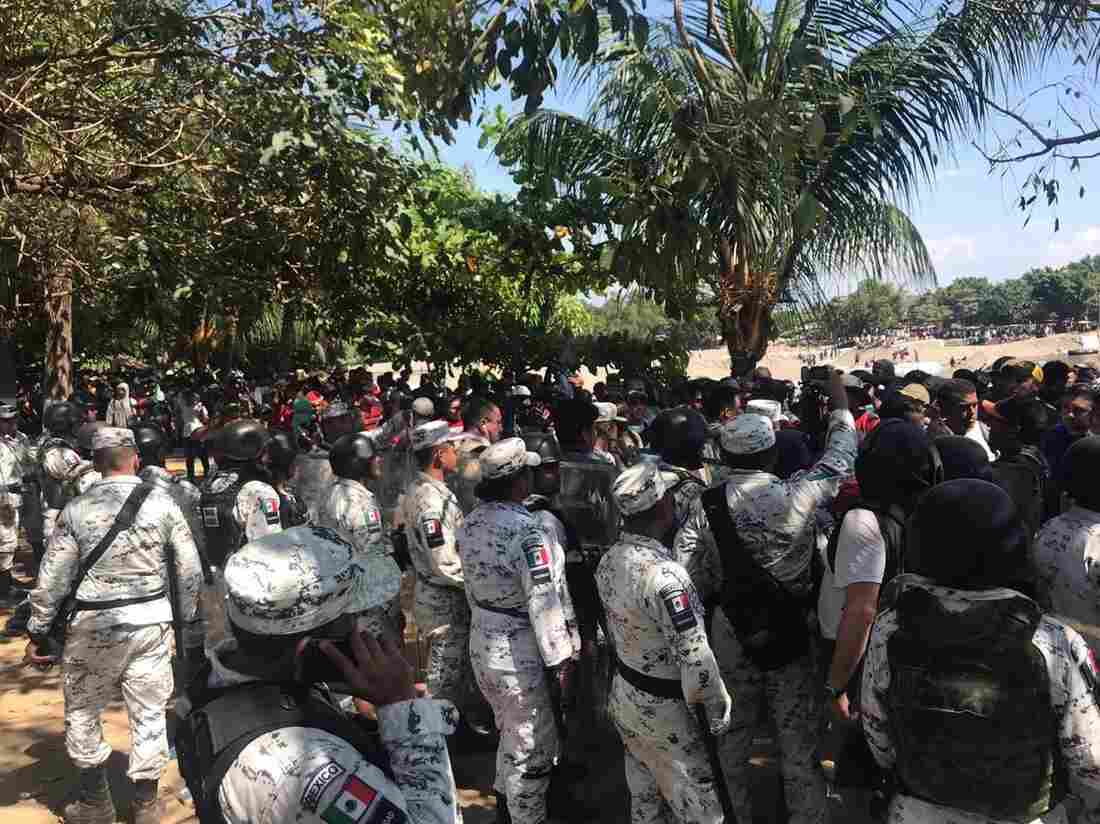 The Mexican National Guard lines the banks of the Suchiate River in order to halt a large group of Central American migrants from moving deeper into Mexico.

Trump upended American’s longstanding asylum procedures with the Remain in Mexico program in which tens of thousands of asylum-seekers are forced wait for the outcome of their court cases in Mexico. Less than 1% of the cases lead to successful entry into the U.S.

“The message is clear,” Mark Morgan, the acting commissioner of U.S. Customs and Border Protection, said at a news conference in Washington last month.

“They will no longer be allowed to exploit our laws. And to be allowed into our country based on fraudulent claims,” Morgan said. “Those loopholes have been closed.”

NPR’s Carrie Kahn and Joel Rose contributed to this report.