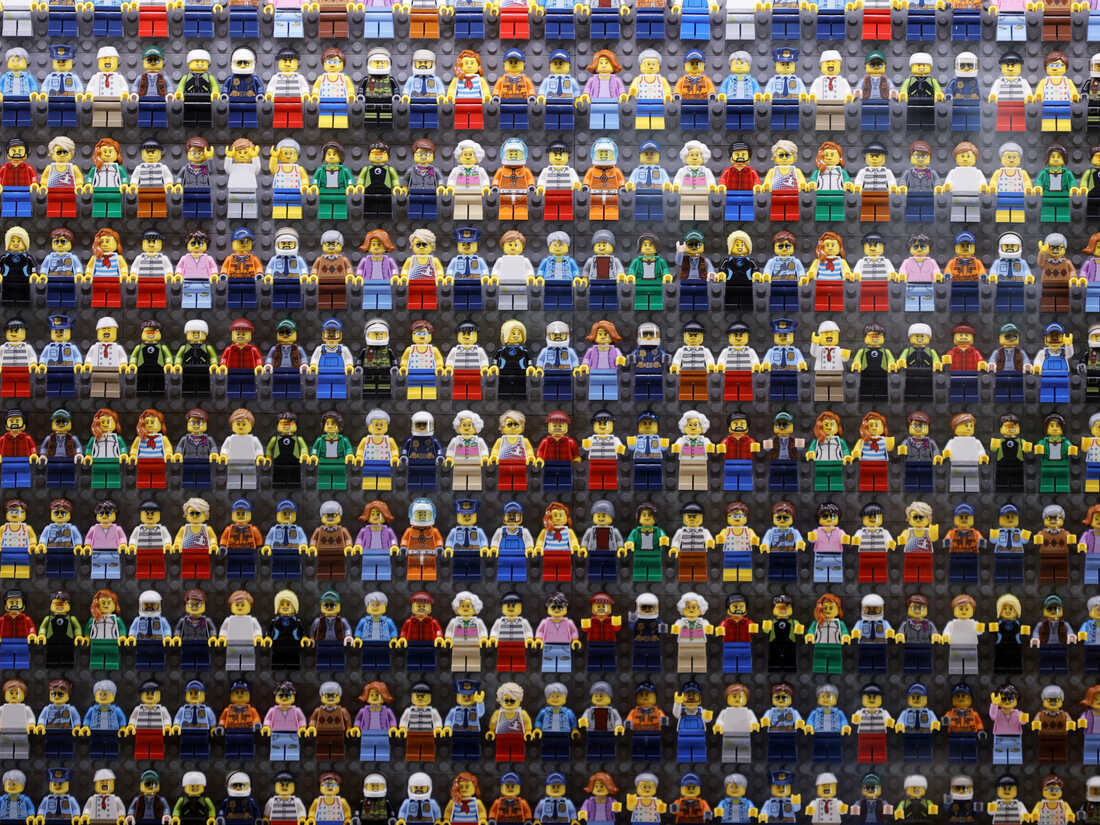 A wall of Lego minifigures is encased inside the lobby of the Legoland New York Hotel, pictured on Aug. 6 in Goshen, N.Y. The Danish company is pledging to remove harmful stereotypes from its products and marketing.

The Lego Group hopes its iconic blocks can help build not just trains and houses, but a more inclusive society.

The Danish toy company announced Monday that it will work to remove gender stereotypes from its products and marketing, citing the results of a worldwide survey that found general attitudes towards kids’ play and creative careers remain “unequal and restrictive.”

“The benefits of creative play such as building confidence, creativity and communication skills are felt by all children and yet we still experience age-old stereotypes that label activities as only being suitable for one specific gender,” Julia Goldin, Lego’s chief marketing officer, said in a statement, adding that “at the LEGO Group we know we have a role to play in putting this right.”

Lego partnered with the Geena Davis Institute on Gender in Media — a research organization that advocates for equal representation of women — to explore whether parents and kids see creativity as gendered. It surveyed nearly 7,000 people in seven countries and released its findings to coincide with the United Nations’ International Day of the Girl.

Lego said the survey “tested for implicit bias in how parents define creativity differently for their sons and their daughters.” In it, parents of kids between the ages of 6 and 14 completed the first half of the survey, then passed it off to their children.

The company noted that its findings are based solely on daughters and sons, because no children identified as gender non-conforming in any of the seven countries surveyed: United States, China, Japan, Poland, Russia, the Czech Republic and the United Kingdom.

In summing up the study, Lego says that “girls are ready for the world but society isn’t quite ready to support their growth through play,” pointing to gender biases against its own products. For instance, 76% of parents said they would encourage their sons to play with Legos, compared to 24% who would recommend it to their daughters.

“New research commissioned by the LEGO Group reveals that girls today feel increasingly confident to engage in all types of play and creative activities, but remain held back by society’s ingrained gender stereotypes as they grow older,” it said.

Other takeaways from the study include:

The building blocks of Lego’s plan

Lego has pledged to collaborate with the Geena Davis Institute and UNICEF to remove gender biases and harmful stereotypes from its products and marketing.

It also published a 10-step guide for inspiring inclusive creative play, and is releasing short films to highlight inspiring and entrepreneurial girls as part of a new “Ready for Girls” campaign.

A spokesperson told NPR over email that the survey reinforces longtime company priorities, noting for instance that customers have not been able to search products by gender online or in Lego stores for years. Instead, they can choose from categories like age, theme, interest and price range.

The company would not elaborate on whether it is planning any changes to specific toys or marketing campaigns. But the spokesperson highlighted some of Lego’s ongoing efforts, like testing all product franchises with both boys and girls and publicly spotlighting strong male and female role models in interviews and at events.

The law won’t prohibit department stores from having boys’ and girls’ sections, but requires them to maintain a “reasonable selection” of children’s toys and items in a gender-neutral section. Stores that don’t comply would face a fine of up to $250 on their first offense and up to $500 for their second.

Supporters of the law say it will help increase freedom of expression for children and parents, and note that products marketed to girls often cost more. Conservative critics say the state should not interfere with business owners’ freedom to market their products.