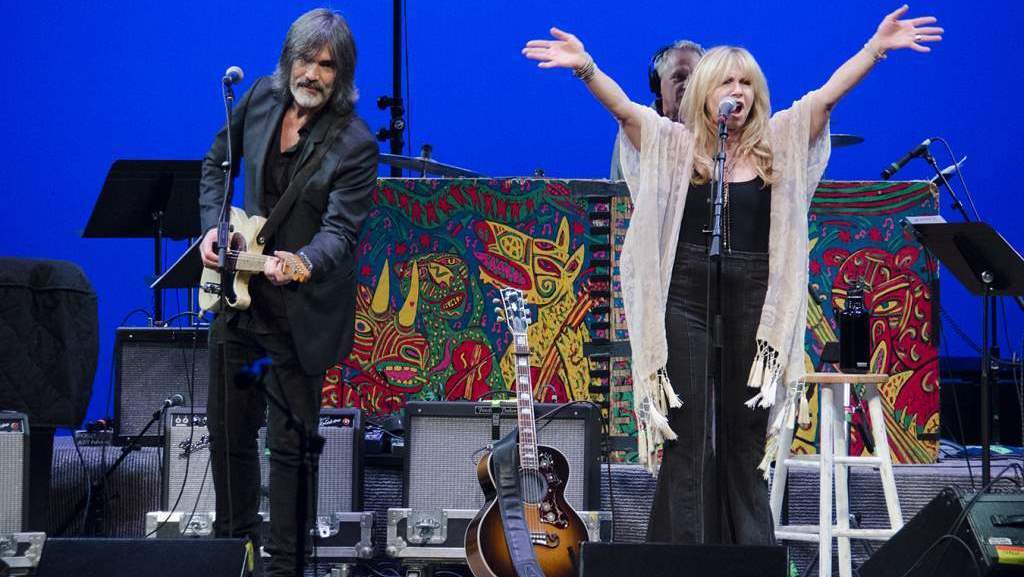 Married for more than 30 years, the masterful Americana couple Larry Campbell and Teresa Williams have built a rich tapestry of a musical life and career together, and separately, making somebody else’s songs sound so soulful and rich. Together they spent seven years in Levon Helm‘s band, where Campbell was the musical director, and they both frequently guest with heavyweights like Phil Lesh, Little Feat and Hot Tuna‘s Jorma Kaukonen and Jack Casady.

The Woodstock, N.Y.-based couple stopped by Mountain Stage to share songs from their second album together, Contraband Love.

Armed with the always-on-point Mountain Stage Band, the couple dove in with hearts and harmonies wide open on the country testimonial “Save Me From Myself,” with such lyrics as “Dearly beloved, can you save me from myself?” Campbell’s world-class guitar work, which landed him a gig playing with Bob Dylan for ten years, reels in the years with the finger-picked honky-tonk blues of “Everybody Loves You.”

The couple gave a sweet nod to their friend John Sebastian, one of the first folks they met when they moved to Woodstock, playing his song “Darling Be Home Soon.”

“We love Mountain Stage,” Campbell told the crowd introducing the song. “I was talking to Larry Groce and he said the directive of Mountain Stage is to play something that makes you happy and that is a great directive.”

The couple closed out their set with an amped-up outpouring of soul-shine, serving up “When I Stop Loving You,” a song Campbell co-wrote with William Bell, the first male soul singer signed to Memphis’ famed Stax Records back in 1961. With the crowd appropriately stoked, they threw more fuel on that fire with a searing version of the gospel blues staple “Keep Your Lamp Trimmed and Burning” that left the crowd on their feet stomping and hollering.

Larry Campbell and Teresa Williams are currently out with Hot Tuna on its 50th anniversary tour.