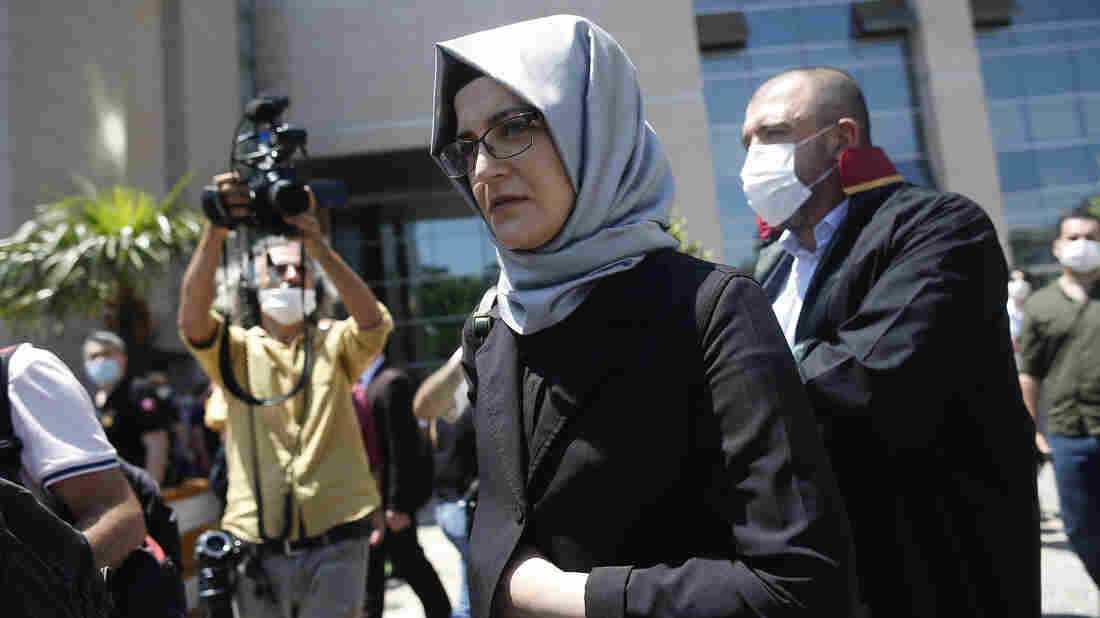 Hatice Cengiz, who was engaged to slain Saudi journalist Jamal Kashoggi, leaves a court in Istanbul on Friday. Two former aides to Saudi Crown Prince Mohammed bin Salman and 18 other Saudi nationals are on trial in absentia over the 2018 killing of the Washington Post columnist.

Twenty Saudi Arabians were put on trial Friday in Istanbul, accused of killing Saudi journalist Jamal Khashoggi in 2018. None of the accused were present in the courtroom because the Saudi government has refused to extradite them.

It’s the first public trial over the murder of Khashoggi, who was lured to the Saudi consulate in Istanbul under the impression that he would be getting paperwork needed to marry his Turkish fiancée. Khashoggi, whose Washington Post columns were critical of the Saudi government, would never walk out of the building. His body was dismembered, and his remains have never been found.

His fiancée, Hatice Cengiz, who had waited outside the consulate that October day, was in court for Friday’s hearing.

Authorities in Turkey are seeking life sentences for the Saudi nationals, who include two former aides to Saudi Crown Prince Mohammed bin Salman. The prince, commonly known as MBS, was widely condemned after the killing but has repeatedly denied any prior knowledge or involvement.

The Turkish indictment accuses of of the suspects, Saudi Arabia’s former deputy intelligence chief Ahmed al-Assiri, of planning the murder and assembling a team to carry it out.

During Friday’s hearing, Yasin Aktay, Khashoggi’s friend and an adviser to Turkish President Recep Tayyip Erdogan, reportedly testified that Khashoggi was concerned when MBS became crown prince and said it “would bring darker days for the kingdom.”

“We used to talk about the operations carried out by the Saudis against dissenters abroad,” he said, according to the state-run news agency Anadolu.

Aktay also testified that he contacted the head of Turkish intelligence and others when Khashoggi hadn’t left the consulate after five hours, according to The Associated Press, citing Turkish media. Aktay said the intelligence chief responded, “I wish he hadn’t gone in.”

Friday’s hearing in Istanbul was the first opportunity to get the facts of Khashoggi’s death on the record, said Agnès Callamard, the United Nations special rapporteur on extra-judicial executions.

In a private Saudi trial last year, eight men were found guilty for their roles in Khashoggi’s killing. Five were sentenced to death, and three were given prison sentences for their role in the cover-up. But many details were kept secret — such as the identity of the men on trial.

“The Saudi process was anything but justice. It was a travesty of justice,” Callamard told reporters after Friday’s hearing, according to The Washington Post. Turkey’s trial was important because it provides “a space where the victims are heard in a way they have never been heard before,” she said.

The trial in Istanbul has been adjourned until Nov 24.