Japan’s Outspoken, U.S.-Educated Vaccine Minister Wants To Be The Next Prime Minister 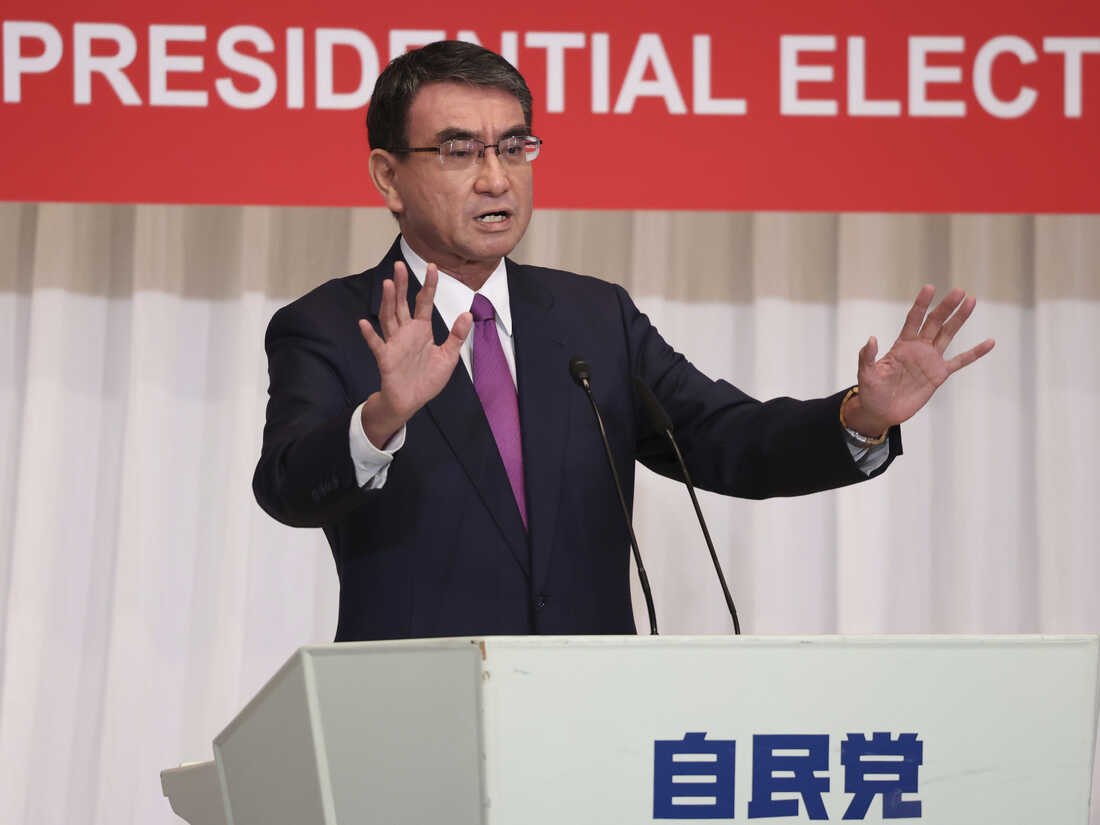 Taro Kono, a candidate of the ruling Liberal Democratic Party and currently the minister in charge of vaccinations, delivers a speech in Tokyo on Sept. 17.

SEOUL — The race to become Japan’s next leader looks like a tossup. In the nearly half-century that Tokyo-based journalist Hiroshi Izumi has been covering party politics and elections, “This is the first time that we cannot predict the result until the ballot box will be opened,” he says.

The ballot box he’s talking about is for choosing the country’s next prime minister next week. The Liberal Democratic Party has been in power for all but two short periods since its inception in 1955, and is holding its leadership election on Sept. 29. Whoever emerges as its leader will effectively become the next prime minister. General elections will follow in November.

The LDP is essentially a coalition of factions advocating a range of policies. These factions are headed by senior men, mostly in their 70s and 80s, who generally do not look kindly upon rebels who challenge the status quo.

But one of the party’s strongest candidates has a reputation as an outspoken reformer and political maverick. In fact, if the winner could be judged just from opinion polls and media attention, Taro Kono would be the odds-on favorite. Kono, 58, is an English-speaking, eight-term LDP lawmaker and currently serves as the minister in charge of Japan’s vaccine rollout, which he has sped up.

But his party may not be inclined to make a prime minister of him.

“The party will not give mavericks positions of power unless, frankly, they’re scared witless,” observes Ellis Krauss, a Japan expert at the University of California, San Diego. And the LDP has good reason to be nervous, he adds, with the party at risk of losing seats in November’s general election.

The prospect of defeat for LDP lawmakers forced the effective resignation of outgoing Prime Minister Yoshihide Suga, announced earlier this month, after less than a year in office. Suga became a political liability to his party. He is an unpopular leader, blamed for bungling the government’s response to COVID-19 — he tried to promote domestic tourism and pushed through the Tokyo Olympics during the pandemic despite widespread opposition — and for being a tone-deaf and wooden communicator.

A growing number of scandals and gaffes by LDP leaders have drawn criticism that the party is led by a gerontocracy that acts with virtual impunity, thanks to its decades-long political dominance.

“The young generation of Japan is really turned off, and Suga did nothing to stop that trend,” says Krauss. “And they need something to inspire them, even a little.”

Kono has been an outspoken critic of government policies

Among the four men and women vying to succeed Suga, Kono is seen by many as the candidate with the strongest reformist credentials. He is also one of Japan’s most popular politicians on Twitter, with a total of more than 2.4 followers on his Japanese and English accounts.

Kono has been a strong advocate for the U.S.-Japan alliance and a critic of what he sees as China’s “revisionism.”

“He would, I think, get along great with the U.S.,” says Krauss.

One thing Kono is not, though, is an upstart. He comes from a family of prominent politicians.

Kono graduated from Georgetown University in 1986 and worked for U.S. Senators Alan Cranston of California and Richard Shelby of Alabama.

In his own career as a lawmaker, Kono became known for his liberal views on social policy and his blunt criticism of government policy.

Interviewed by NPR in 2009 about Japan’s practice of allowing foreigners to work in factories under the pretense that they are ethnic Japanese, and therefore different from other foreign workers, “It’s, uh, bull****,” he scoffed. Japanese law prohibits foreigners from taking unskilled jobs in Japan, but descendants of Japanese immigrants to South America are granted an exception. “We just wanted the cheap labor,” Kono said, “but we don’t want to open our market to the foreign countries.”

“We’ve been depending on the nuclear energy so much,” he lamented. “It’s not the policy choice. It’s because of those bureaucrats and the power company and the politician got some vested interest in promoting nuclear.”

From 2012 to last year, when Kono held a series of cabinet positions including foreign minister and defense minister under former Prime Minister Shinzo Abe, Kono toned down his rhetoric and softened his stance on some issues, Krauss says. For example, Kono now says that Japanese nuclear power plants that shut down after the Fukushima meltdown can be restarted so that Japan can go carbon-neutral by 2050.

“He really is a maverick, and he has been one his whole career,” Krauss says. “But he’s a maverick who’s willing to compromise, in order to achieve what he wants.”

In the current campaign season, Kono has backpedaled on previous comments that he is open to allowing women to becoming emperor, an idea that’s anathema to many conservatives in his party. He is still in favor of same-sex marriage and allowing married couples to use separate surnames, neither of which Japanese law permits.

While these views may prove popular with the public, Kono faces a reformer’s dilemma: he must seek the backing of the very power brokers whom the reforms could threaten.

So far, Izumi says, Kono has not even got the backing of his own faction boss, Taro Aso, a former prime minister and current deputy prime minister who has not shown a clear preference for any one candidate.

What concerns the party leaders is the possibility that Kono will try to dismantle their vested economic interests, Izumi says.

As a lawmaker, Kono has railed against the cozy relationships between Japanese politicians and business lobbies, and between media and advertisers.

“More than 40% of LDP members join the party as members of industry associations,” Izumi explains. “They represent interest groups. And the scariest thing for them is Mr. Kono doing whatever he wants.”

During the campaign, Kono has also advocated sweeping reforms of Japan’s social security system, guaranteeing minimum pension income to poor seniors who cannot afford to pay insurance premiums. This stands in contrast with Suga’s insistence that Japanese practice “self-reliance” instead of relying on public support.

If Kono becomes prime minister and then tries to break up vested interests, party members could rebel against him, Izumi warns. In that case, Kono could find himself the latest in a series of “revolving door” leaders, who — like his predecessor — are forced to quit after one term.