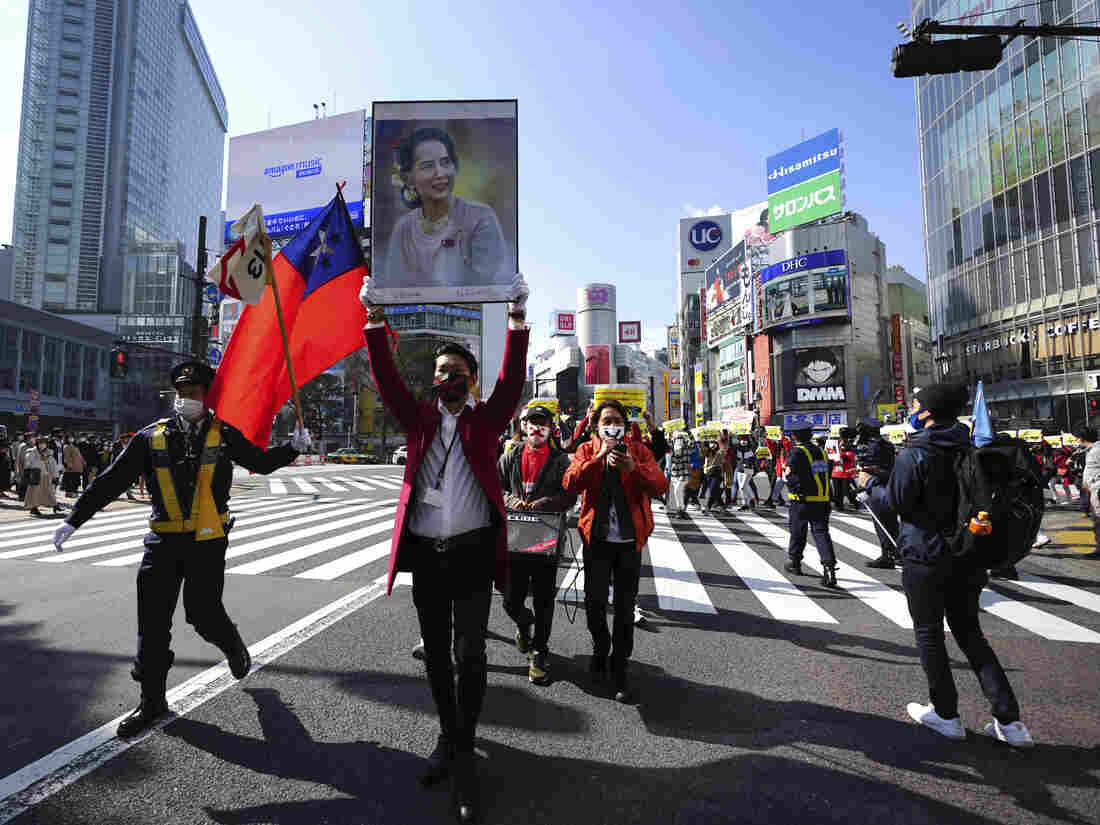 Myanmar people and supporters march during on Feb. 14 in Tokyo to protest the military coup.

SEOUL — The military’s killing of at least 18 protesters on Sunday in Myanmar has increased pressure on foreign governments to use their influence to push for the release of the country’s elected leaders, including Aung San Suu Kyi, from detention, and restore some measure of democratic rule.

Among Asian countries, Japan is one of the most influential. How it decides to handle Myanmar’s coup could have a major impact on the Biden administration’s bid to put democracy and alliances at the heart of its foreign policy.

Like the U.S., Japan confronts a multifaceted dilemma: if it sanctions the military in the name of a values-based foreign policy — as the U.S. has done — it may lose access to and leverage over Myanmar’s military leaders. As a key foreign investor in Myanmar, it may also lose business interests. And it may lose the upper hand in geopolitical competition with China.

“Japan and the U.S. have the shared goal of seeing Myanmar return to democracy,” says Katsuyuki Imoto, a Japanese civil society activist who has worked in Myanmar over the past decade. “The U.S. has its way of doing things, and Japan has its own way, which only Japan can follow. So it’s like we have different roles.”

Imoto is a colorful example of how Japan works behind the scenes to defuse conflicts and win friends and influence in Myanmar. He is a former Buddhist priest who lived for three years in Myanmar’s jungles, organizing ethnic armed groups to negotiate cease-fires with the military, which they have been fighting for decades in a quest for autonomy under a federal system.

The groups Imoto worked with expressed their appreciation by dubbing him the “Zero fighter,” after the World War II-era Japanese fighter aircraft.

During cease-fire talks, they allowed him to excavate the remains of Japanese and U.S. soldiers in remote parts of the country normally inaccessible to outsiders due to the insurgencies. Some remains have been repatriated to Japan.

Playing a similar peacemaking role is Yohei Sasakawa, the Japanese government’s special envoy to Myanmar and head of the nonprofit Nippon Foundation. In December, he brokered a cease-fire between Arakan Army insurgents and the military in Myanmar’s strife-torn western Rakhine State. He also met with Gen. Min Aung Hlaing, Myanmar’s commander in chief, who led last month’s coup, and Suu Kyi.

Imoto believes Japan should use its influence and connections to nudge Myanmar toward democracy and impose sanctions only as a last resort. 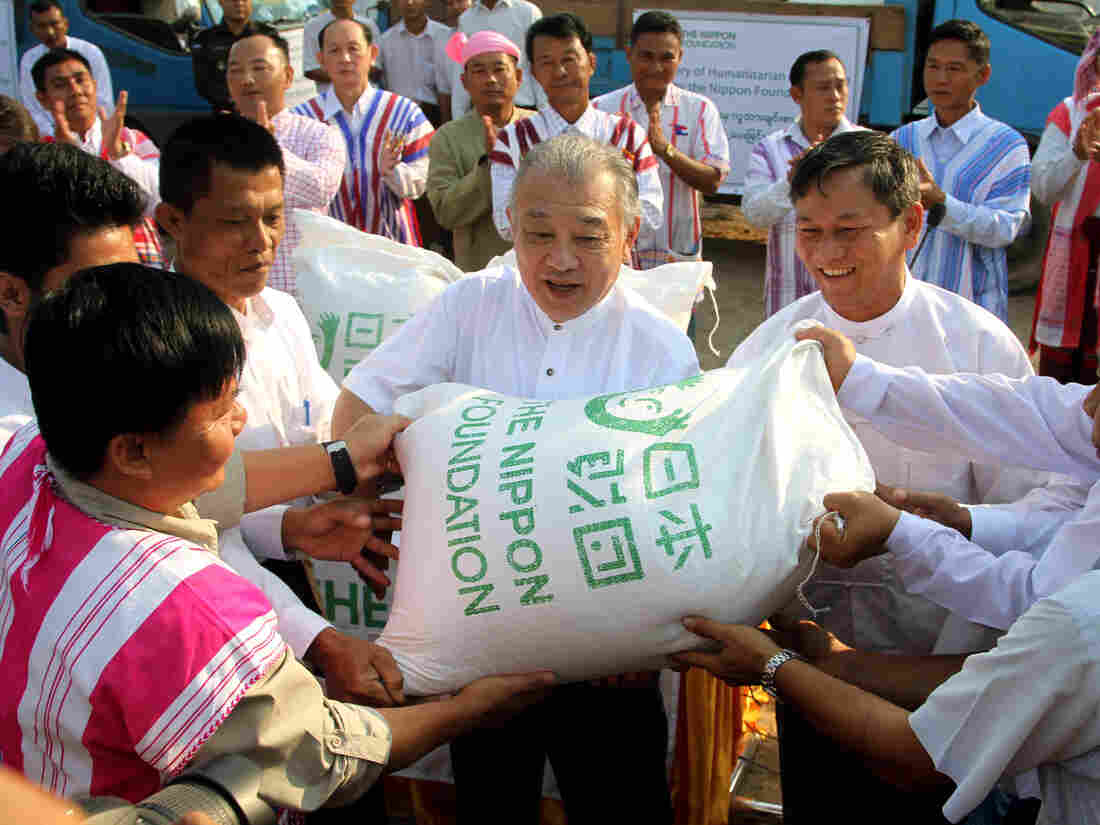 “If Japan gets involved in imposing sanctions, we could lose the channels of communication that we have,” he argues. “What we should do now is to mediate between the Burmese military and the Americans and Europeans.”

Secretary of State Antony Blinken and Japanese Foreign Minister Toshimitsu Motegi have been in touch about the coup. Japan’s foreign ministry says Ichiro Maruyama, Japan’s ambassador to Myanmar, has been trying to persuade the military to release detained leaders, including Suu Kyi, and restore democratic rule.

Anti-coup protesters in Myanmar, aware of Japan’s influence, recently gathered at its embassy and called for Japan’s intervention against the coup. Maruyama told the protesters in Burmese that Japan would “not ignore the voices of the people of Myanmar.”

Human rights advocates have criticized Maruyama for defending Myanmar’s military from criticism and allegations of genocide against the Muslim Rohingya minority.

Japan has maintained good relations with Myanmar’s military for decades, including periods when the ruling military junta was shunned and isolated by Western nations, including the U.S.

Japan traces its relations with the military back to the founding of Burma’s army in 1941 by Suu Kyi’s father, independence hero Gen. Aung San, with help from imperial Japan. Both wanted to oust Burma’s British colonial rulers. But Japan occupied Burma for the remainder of World War II, and Aung San turned against the Japanese.

“The importance of Myanmar for Japan is partially historical,” says Maiko Ichihara, an expert on Japanese foreign policy at Hitotsubashi University in Tokyo and a visiting scholar at the Carnegie Endowment for International Peace. “But [it’s] more due to the geopolitical contestation between Japan and China.”

Ichihara argues that competition with China has both propelled and inhibited Japan’s support for democracy in Myanmar, where the military tolerated the rise of a semi-civilian government from 2010, partly in order to decrease its reliance on China.

The rise of that government created space for Japanese like Imoto and Sasakawa to get involved in the ethnic cease-fire efforts, and for Japan to become one of Myanmar’s biggest foreign investors. Among the world’s developed economies, Japan is also Myanmar’s top development aid donor.

But, Ichihara says, Tokyo has been cautious about promoting political values, fearing that “if Japan was to try to further push the country toward democratization, then there could be backlash from the military.” That, he says, could cause Japan to lose its influence.

Japan frames its competition with China in terms of values. During former Prime Minister Shinzo Abe’s first term, from 2006-2007, Tokyo envisioned an “Arc of Freedom and Prosperity” sweeping across Asia’s democratic states, but pointedly omitted China. Repackaged as the “Free and Open Indo-Pacific” during Abe’s second term, the policy has been echoed by the Trump and Biden administrations.

The problem is that Japan’s notion of a free and open Indo-Pacific “was never about democracy or human rights,” but instead more about free trade and open sea lanes, says Derek Mitchell, president of the National Democratic Institute and a former U.S. ambassador to Myanmar.

“If Japan sort of does what it normally does, which is protect its business interests and sort of cast aside the issues of values and democracy,” he says, “then the military will essentially wait this out … or they won’t feel the heat.”

Japan doesn’t have to join the U.S. in imposing sanctions yet, Mitchell says. It just needs to make Myanmar’s military believe that it could.