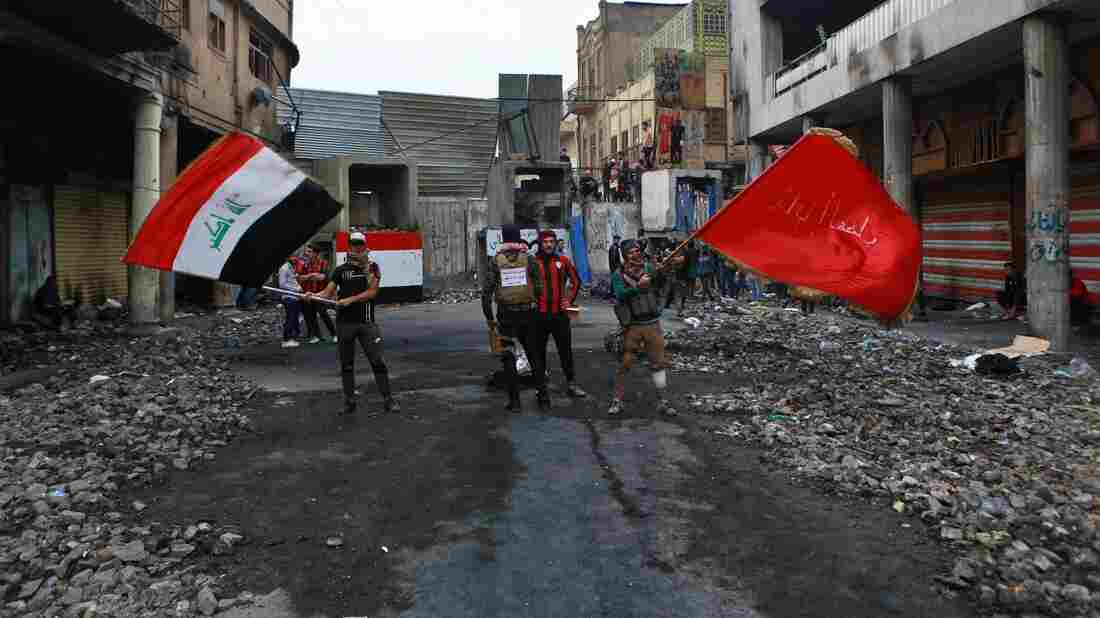 The resignation of Iraqi Prime Minister Adel Abdul-Mahdi is now official, following a session of Parliament on Sunday. Abdul-Mahdi and his government will stay on in a caretaker capacity until the parliament forms a new government.

Lawmakers told the Associated Press the process for how to handle a premier’s resignation was constitutionally unclear, but Parliament followed a legal opinion from Iraq’s federal supreme court, which said they could enact Abdul-Mahdi’s resignation without a vote.

Meanwhile, protests continued in Baghdad, where one demonstrator was killed and 10 others were wounded on Sunday. According to the Associated Press, security forces fired live ammunition on crowds near the Ahrar Bridge that led to Iraq’s Parliament and other government buildings. Anti-government protesters also gathered Sunday in Basra, about 330 miles south of Baghdad.

At least 400 people have been killed in Iraq since anti-government protests began in October. Security forces shot and killed at least three dozen people during protests in the southern city of Nasiriyah on Thursday.

During his visit to Iraq last weekend, Vice President Mike Pence spoke with Abdul-Mahdi on the phone. Pence told reporters that he “encouraged [Abdul-Mahdi] to listen to those who are protesting and their calls for reform.”

“I think he got signals from many circles, international and local, to stay on, and that he can contain the situation,” Kubba said. “I think they grossly underestimated the rage that was out there, and they misread basically what it was all about.”

Protesters have been demanding jobs and an end to corruption; they have also been decrying what they see as Iran’s growing influence over Iraq’s internal affairs. Prior to Abdul-Mahdi’s resignation, his government attempted to satisfy some of the protesters’ demands with a package of reforms to provide jobs and improve services, as well as a bill that would reform the electoral system.

Samya Kullab, Iraq correspondent for the Associated Press, told NPR’s All Things Considered last week that many protesters rejected the reforms — and are instead “looking to dismantle the entire political establishment.”

The demonstrations express a deep dissatisfaction with the political system set up after the U.S. invasion of Iraq in 2003. The invasion led to sectarianism, and the rise of a ruling class that protesters say reap material rewards while the rest of the country struggles economically.

“You know, 16 years, there is nothing good,” said Hala Chalabi, a widowed mother who went out to protests with her three daughters in October. Chalabi told NPR that “no one thinks about the Iraqi people, what they want, what they dream.”

“The system that was built and the powers that took over that system have led the country to a dead end,” Kubba told NPR on Sunday. “The country can not continue with that system and with this political class. So the question now is how to map out a transition that will be least costly to the country, bearing in mind Iraq is in the midst of a region full of turbulence and violence.”

As Reuters has reported, Abdul-Mahdi said in a televised cabinet meeting on Saturday that the next step in the transition after his resignation would be for President Barham Salih to name a new premier for Parliament to approve.

But the powerful populist cleric Moqtada al-Sadr said Friday on Twitter that he believes a popular referendum should be held to choose the next prime minister, and the people should vote from among five proposed candidates. Sadr encouraged the protesters to continue making demands, but to reject violence.

Speaking with NPR’s Weekend Edition, Kubba warned that if Iraq’s elites simply put forward a candidate for prime minister, they will not succeed in stabilizing the country.

“I think we need to focus on a transition where a council of dignitaries play an intermediary role to win the confidence [of the Iraqi people],” Kubba said.