Iran’s Only Female Olympic Medalist Says She Has Defected 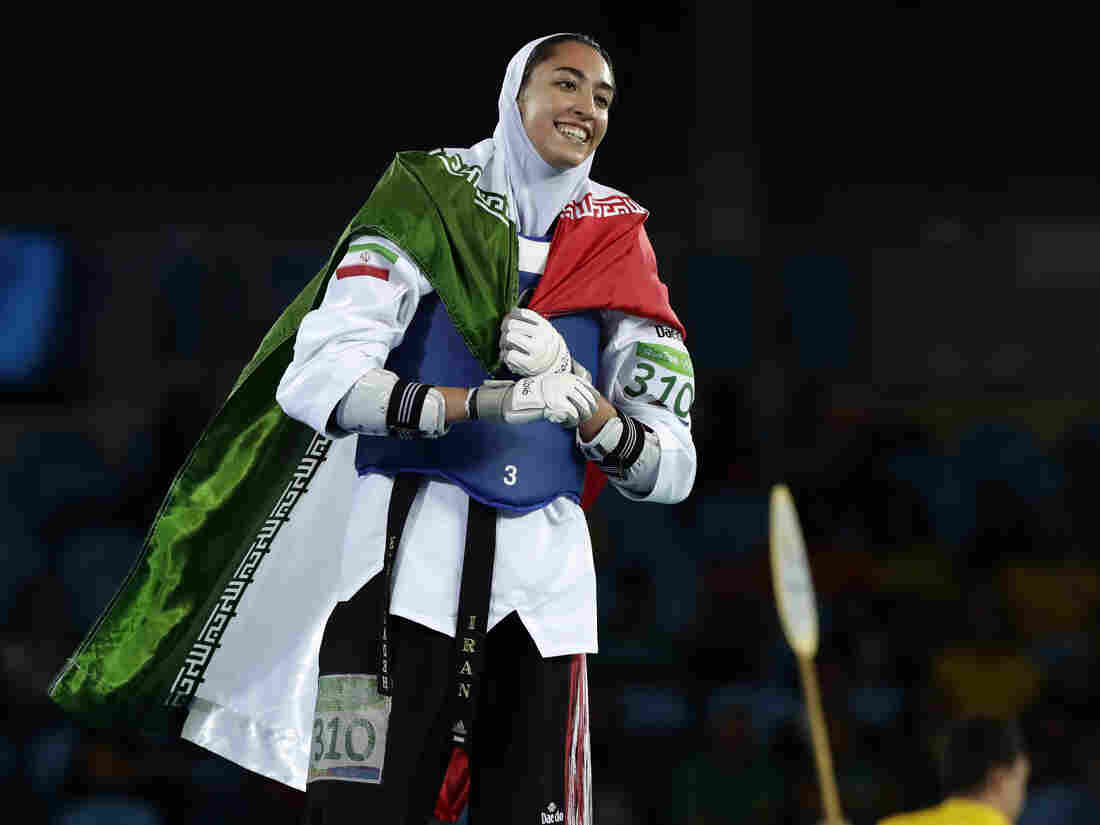 Kimia Alizadeh of Iran celebrates after winning a bronze medal in taekwondo at the 2016 Summer Olympics in Rio de Janeiro, Brazil. She says she is defecting from Iran to escape oppression.

An Iranian Olympian, Kimia Alizadeh, has reportedly defected from the Islamic Republic, according to a letter she published on her Instagram account on Saturday.

The letter was published in Persian and is accompanied by a black and white image of her from the 2016 Olympics in Rio de Janeiro, Brazil.

She describes her decision to leave as difficult, but referring to herself as “one of the millions of oppressed women in Iran,” Alizadeh says it was necessary.

“This decision is even harder to win than the Olympic gold, but I remain the daughter of Iran wherever I am,” Alizadeh writes.

Alizadeh was 18-years-old when she won a bronze medal for taekwondo at the 2016 summer Olympics. She is the only woman to ever win an Olympic medal for Iran.

In her letter, she accuses officials in Iran of sexism and mistreatment and criticizes the compulsory wearing of hijab headscarves in public for women.

“They took me wherever they wanted. I wore whatever they said,” the letter reads. “Every sentence they ordered me to say, I repeated.”

Her letter did not disclose when she left Iran or where she has gone. But it did make clear that she was not invited to Europe and that her defection was not the result of any offer of asylum.

Iran’s semiofficial ISNA news agency reported that Alizadeh had fled to the Netherlands. There has been no immediate reaction from Iranian authorities.

It is unclear whether Alizadeh will compete at the Tokyo Olympics this summer under another nation’s flag.

Her defection comes at a time of high tension between Iran and the United States, as well as growing turmoil in Iran.

On Saturday, Iranians took to the streets of Tehran and other cities, with many demanding that the country’s supreme leader, Ayatollah Ali Khamenei, step down after the government admitted that it accidentally shot down a Ukrainian passenger plane killing all 176 people aboard. The admission marked the latest development in the fallout from the U.S. killing of Iranian Maj. Gen. Qassem Soleimani earlier this month.

In recent months, several top sports figures have decided to stop representing — and in some cases physically leave — the country.