India’s farmers faced down a popular prime minister and won. What will they do now? 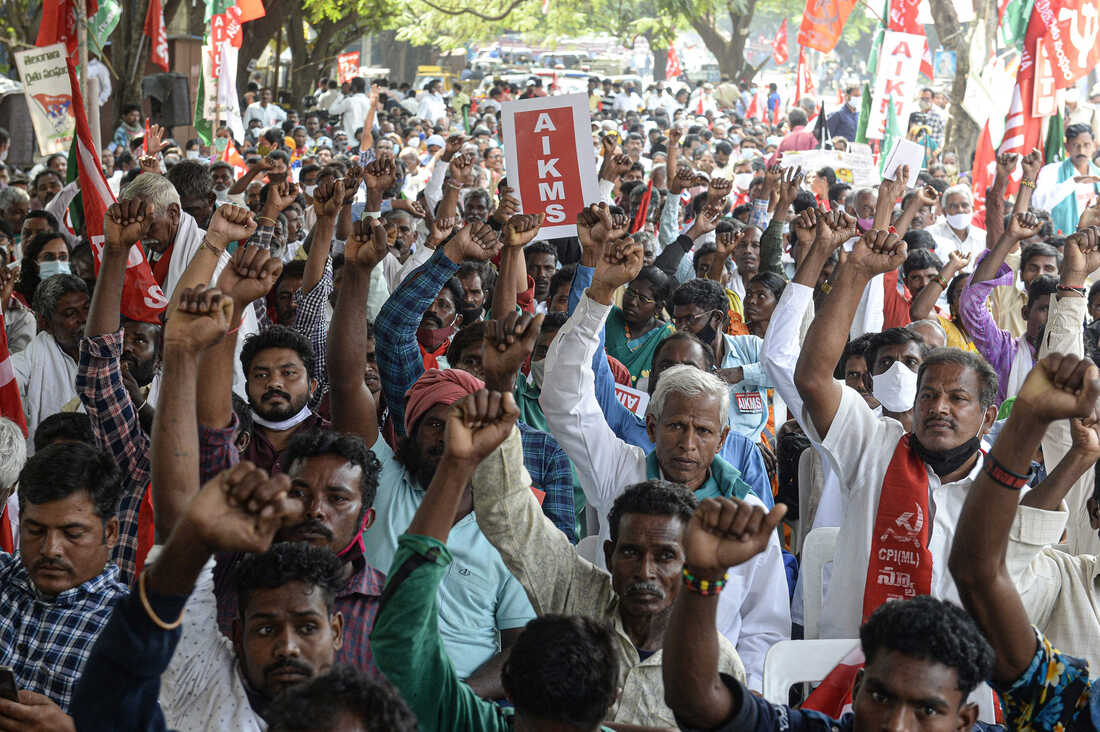 Supporters of All India Kisan Sangharsh Coordination Committee, a group of farmers’ organizations, hold flags during a protest to mark one year since the introduction of divisive farm laws and to demand the withdrawal of the Electricity Amendment Bill, in Hyderabad, India, on Thursday.

GHAZIPUR BORDER, New Delhi — Every day for the past year, a sugarcane farmer in a bright-green turban has been chanting prayers inside a bamboo tent erected in the middle of a highway on the Indian capital’s outskirts.

Ramkumar Pagdiwale, who is in his 50s, has built a little shrine in this sprawling protest camp, with jars of water from the Ganges River, soil from his farm about 30 miles away and an oil lamp that holds special meaning for him. It belonged to his ancestors.

“This is an eternal flame that’s been burning continuously since 1947, during India’s fight for independence,” he explains. “It guides us during protest movements.” 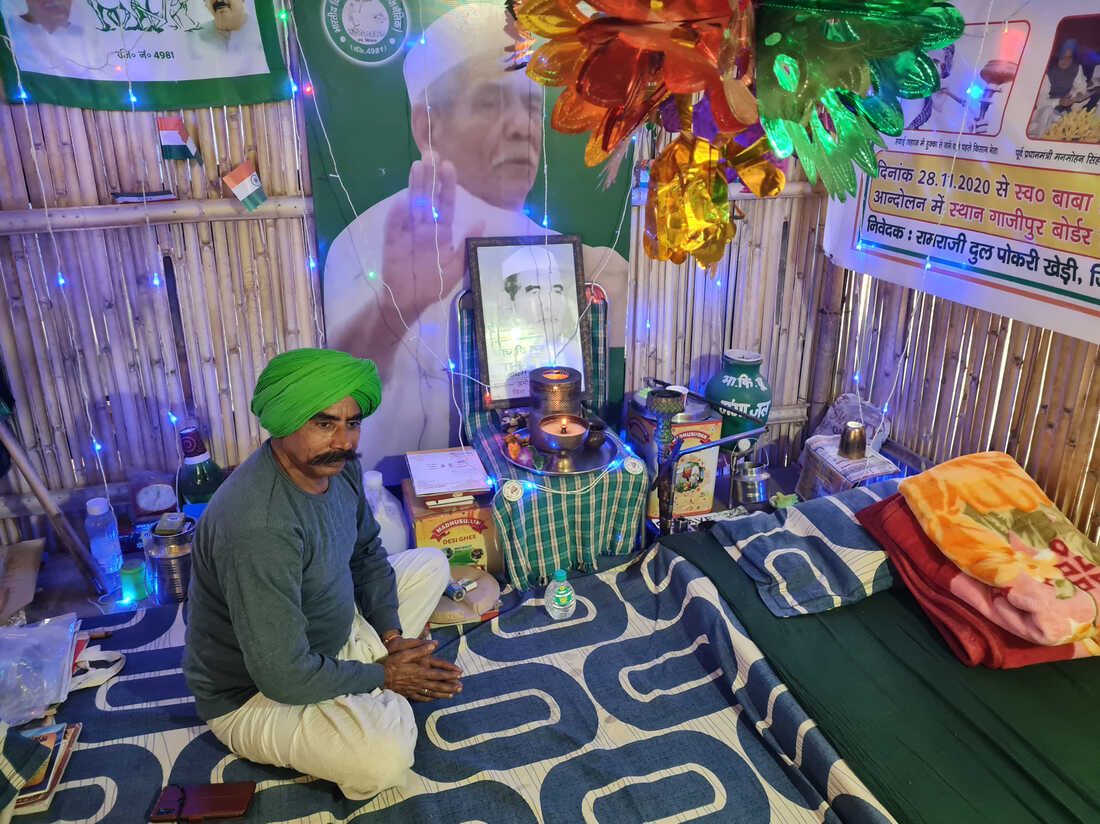 Ramkumar Pagdiwale, a sugarcane farmer from India’s Uttar Pradesh state, has built a little shrine inside his bamboo tent at a protest camp erected in the middle of a highway on the eastern outskirts of India’s capital.

This week, Pagdiwale believes the lamp brought good fortune again. On Wednesday, India’s Cabinet ratified the repeal of three controversial agriculture laws the farmers have been protesting against for the past year.

They’ve held tractor rallies, blocked highways and built encampments like the one Pagdiwale has been living in. Friday is the first anniversary of their mobilization — which morphed into the biggest challenge yet to Prime Minister Narendra Modi’s rule.

“A ruler needs to think about his subjects. But Modi didn’t consult us,” Pagdiwale says. “He brought these laws and thought no one would raise their voice?”

Now, with Modi backing down and repealing the laws, some farmers are packing up and going back to their fields. Others say they’ll hunker down and make more demands.

Theirs was a victory for nonviolent resistance, farmers say. Even as India tops lists of countries where democracy is backsliding, it’s a rare example of a popular grassroots movement effecting political change.

But analysts say Modi’s turnaround is also an astute political move, which could strengthen his hand in the end. 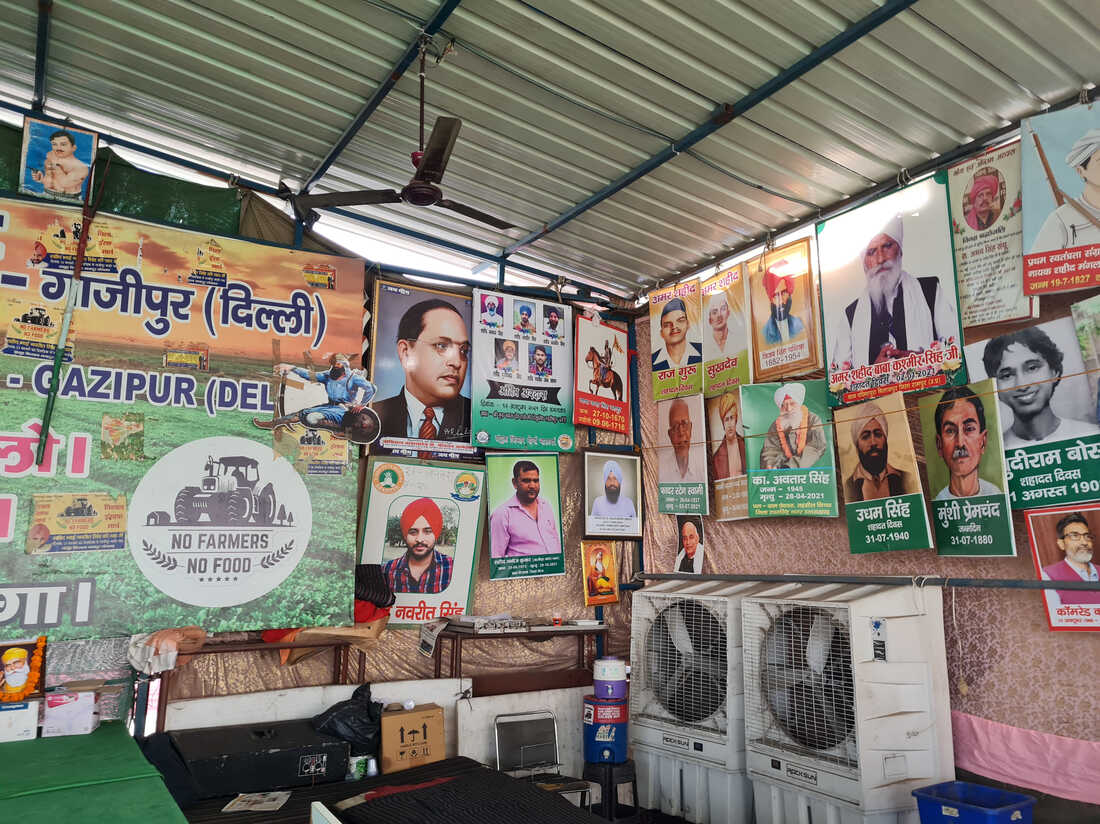 Portraits of famous Indian social reformers hang on the walls of an assembly tent in Ghazipur, eastern Delhi. The portraits include farmers during the struggle for India’s independence, as well as B.R. Ambedkar, a Dalit scholar (formerly known as “untouchable”) who was the chief author of India’s constitution.

Passed by parliament in September 2020, the three farm laws sought to deregulate Indian agriculture, lifting government supervision of crop sales and allowing corporations to negotiate directly with farmers. The government called them much-needed free market reforms. But many farmers feared they would cut into their already meager profits and favor big businesses instead.

In response, farmers waged one of the largest civil disobedience campaigns since India won its independence from Britain. More than half of Indians — as many as 800 million people — make a living, directly or indirectly, from farming.

Many of them are poor. Rising fertilizer, pesticide and seed prices have left a growing number of farmers in debt. There’s been an epidemic of farmer suicides.

But India’s farmers are the biggest agriculture workforce in the world. And when they gathered by the hundreds of thousands in the streets, they grabbed attention.

In January, India’s Supreme Court suspended the farm laws’ implementation, ordering the government to negotiate with farm unions. Then this month, Modi — India’s most popular prime minister in decades — capitulated.

“This is a great victory of the nonviolent people’s struggle, following the path shown by Mahatma Gandhi,” Medha Patkar, a renowned Indian social reformer, tells NPR by phone from her base in rural Maharashtra state.

Gandhi used nonviolent protest to fight a colonial power. The farmers used it to fight a powerful government that passed agriculture reform without consulting them.

“Across the world, democratic governance is collapsing. Yet we always have a ray of hope,” Patkar says. “Capitalist forces are challenged, and that challenge, in India, is coming from our farmers and laborers.” 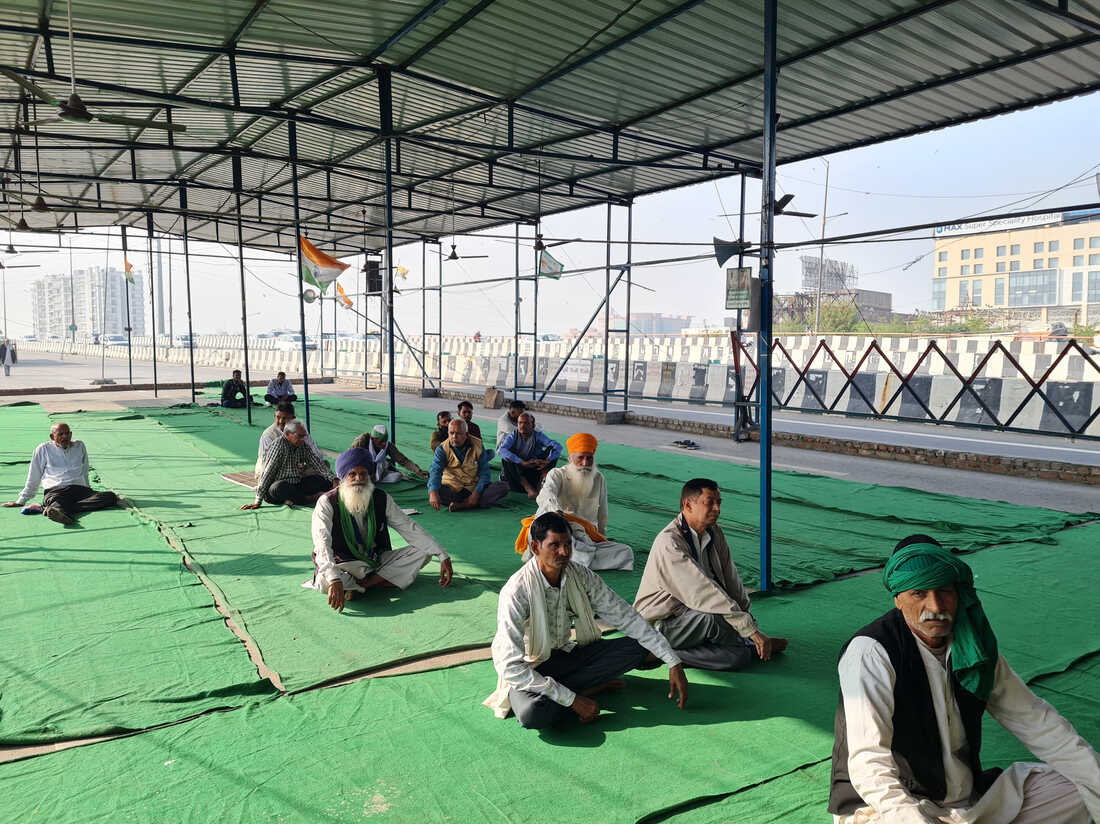 Sparse crowds earlier this week at an assembly of farmer protesters in Ghazipur, eastern Delhi. Friday marks the first anniversary of the farmer protests.

While the protesters were overwhelmingly nonviolent, some of their rallies were marred by clashes. On Jan. 26 — Republic Day, a national holiday — protesting farmers broke through police barricades in Delhi and scrambled atop the 17th century Red Fort, waving flags. Police charged after them, beating protesters with bamboo rods called lathis and firing tear gas. One farmer died in the chaos.

In October, the son of one of Modi’s government ministers allegedly rammed his father’s car into a crowd of farmer protesters, killing four of them. The politician’s son was arrested. The incident became a rallying cry for farmers and their supporters.

But while farmers celebrate their victory this week, analysts say there may be a silver lining for the prime minister, too.

Some see the government’s response as a shrewd political move

Elections are expected in early 2022 in India’s most populous state, Uttar Pradesh, and in Punjab, another northern state. Both are agricultural bases where farmers have held huge protest rallies, and where farm unions hold sway. (Many farmers in other states, by contrast, have not been as involved in the anti-government protests; some even quietly supported the farm laws.)

While Modi’s Bharatiya Janata Party, or BJP, is the incumbent power in Uttar Pradesh, farmers and observers say the party has been hemorrhaging support in farming areas in southern and western parts of the state.

“As the elections come closer, I think the government realized that they would have to give in,” development economist Jayati Ghosh, a professor at the University of Massachusetts Amherst, tells NPR during a recent visit to Delhi.

Likewise in Punjab, an opposition-ruled state, the BJP had little hope of making inroads without farmers’ votes. Punjab is known as India’s breadbasket, where rice and wheat farmers supply a disproportionate share of the country’s food staples. It’s also a Sikh-majority state, unlike most of India, which has a Hindu majority. 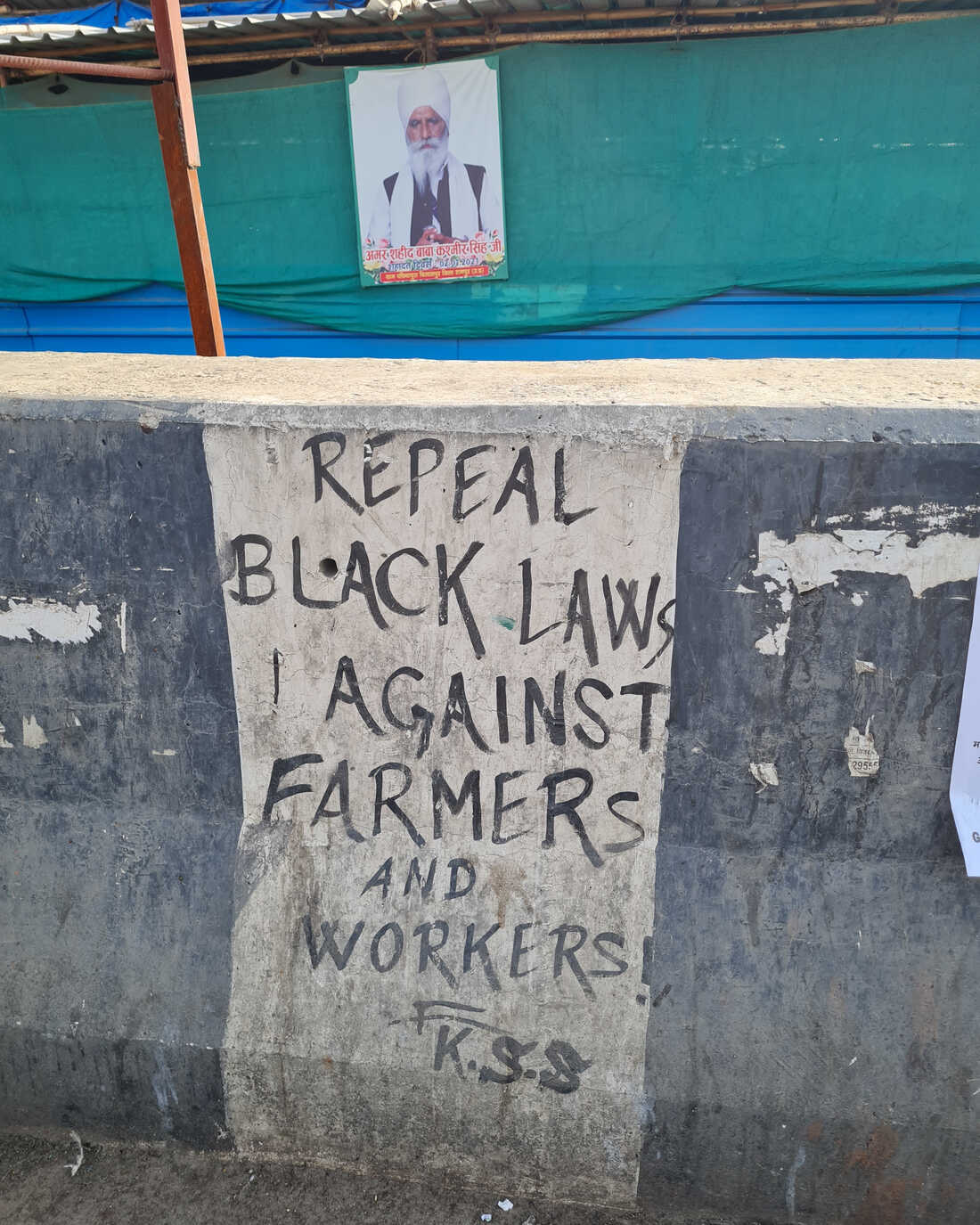 Pro-farmer graffiti on a highway barricade near Ghazipur, where Indian farmers have been camping out for a year, protesting against Prime Minister Narendra Modi’s farm laws.

Modi first announced his intention to repeal the laws on Nov. 19 — a major Sikh holiday.

“This is entirely electoral. This is catering to the voters of Punjab, which has been the center of the farmers’ agitation,” Ghosh says. “[Modi] wants to wipe away the very bitter memory the farmers have of his own words. He called them ‘professional agitators.’ His ministers called them anti-national, disorderly. All kinds of abuse was thrown their way. He wants to make everyone forget this before the elections.”

As the BBC has reported, digital investigators also uncovered a network of fake social media profiles that sought to slander Sikhs and boost the image of the Indian government during the farmers’ protests. It bears the hallmark of previous BJP disinformation campaigns, though there is no evidence of a link and the government refused to comment on the report.

In his Nov. 19 speech, Modi called the farmers his “brothers.”

“I apologize to the people of the country with a true and pure heart,” Modi said in a televised speech. “There must have been some deficiency in our efforts that we could not convince some farmers.”

It was an apology some found ambiguous. But Modi may be hoping it helps win over farmers in the key states of Uttar Pradesh and Punjab. If it does, his farm laws may go down in history as the collateral damage of a turnaround that helps Modi solidify even more power.

Farmers aren’t sure whether to forgive the prime minister

Pagdiwale, the sugarcane farmer, says he’s unsure whether Modi’s apology is enough to win his vote. He’s from Uttar Pradesh and voted for the BJP once in the past, he says. Now he’s undecided.

“If this administration is ready to listen to farmers going forward, we can consider voting for them,” Pagdiwale says. “But if they come up with any such harsh laws for farmers in the future, then they will again lose our respect.”

Many economists say Indian agriculture is still in desperate need of reform. It employs about 60% of Indians, but amounts to less than 15% of the country’s gross domestic product. It’s possible that Modi’s government will come up with subsequent agriculture bills. But farmers will likely be wary. 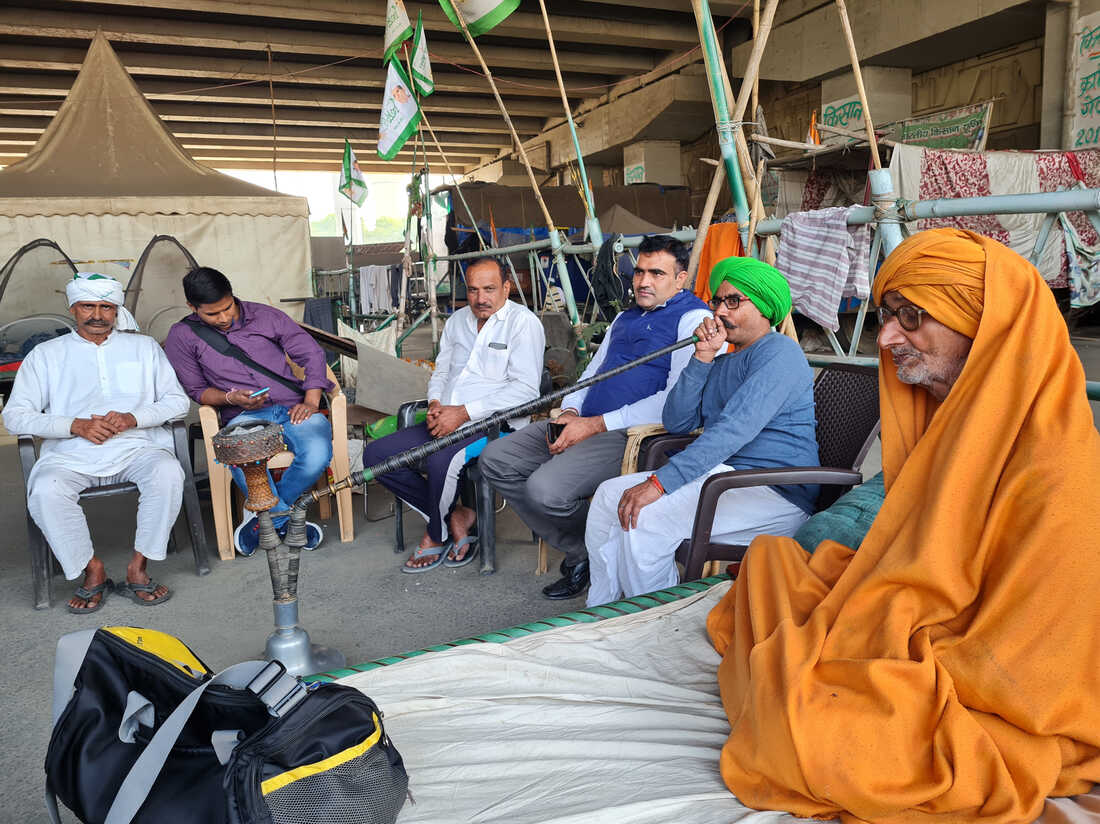 Ramkumar Pagdiwale, in a green turban, smokes a traditional hookah pipe from his home state of Uttar Pradesh. Pagdiwale is a sugarcane farmer who’s spent the past year camping out in the Indian capital, protesting Prime Minister Narendra Modi’s new farm laws.

Meanwhile, farm unions still have one big unmet demand around the issue of minimum support prices.

Currently, the government sets minimum prices for 22 crops that are considered staples, including wheat and rice. But it’s not technically illegal to sell those crops below the minimum support price, or MSP. Farmers want MSPs written into law, and better enforced. (With lax oversight, some wholesaler buyers ignore the minimum prices and cheat farmers into selling their crops at lower rates, often at a loss.) Some farmers also want the list of eligible crops expanded beyond those 22 staples.

Ghosh, the economist, says it’s a reasonable request. But she doubts the government will agree. She thinks Modi’s apology may be as far as he’s willing to go.

“I am amazed that the farmers have managed to win so far against an intransigent government that never likes to admit defeat. So they have achieved a lot. But will they be able to push the MSP into law? I doubt it,” Ghosh says. “The government may do the classic moves of governments that feel cornered: They will set up a committee, they will have discussions, they will prolong the whole thing — and focus on winning elections.”

Some farmers say they won’t budge from their protest camps until their MSP demands are met. But others are already packing up.

The protest camp in Ghazipur, on the eastern edge of Delhi, may take some time to disassemble. There are thousands of tents, with tens of thousands of cots and sleeping bags. There are several mess tents with kitchens, and even a laundry station. Women hang clothes to dry on the edge of a highway flyover. Water tanker trucks deliver fresh supplies.

Residents say that at its fullest, the camp hosted more than 2 million farmers. Two even larger camps lie to the city’s north and west. The camps have been supported by donations to farmer groups and Sikh temples from as far away as California. 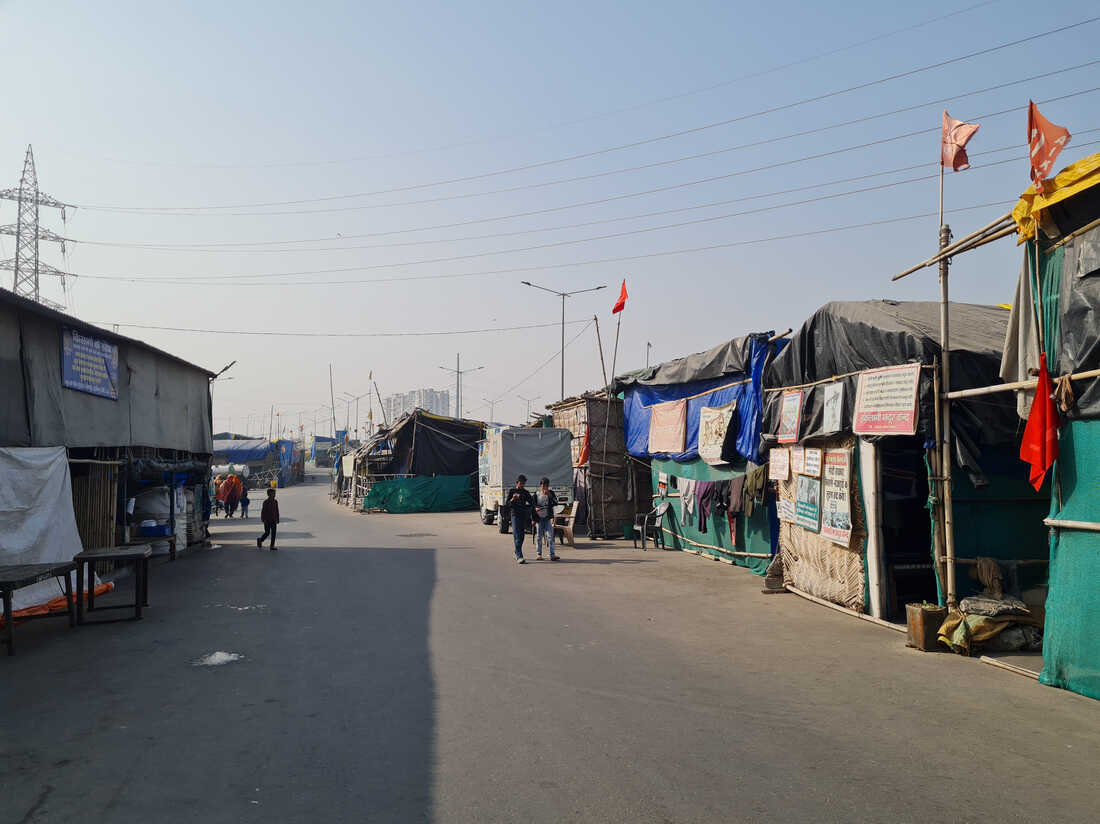 Scenes from a farmers’ protest camp on the eastern outskirts of India’s capital. At its fullest, residents say this camp held more than 2 million farmers. But crowds have thinned after a year of protests, and after Prime Minister Narendra Modi capitulated to the farmers’ demands, and indicated he will repeal three controversial farm laws.

But when NPR visited this week, the Ghazipur camp had emptied. Only a few hundred farmers remained. They’re holding assemblies there this weekend to plan their next moves.

“Modi is thinking only about the elections. Maybe he’s thinking of power. But we are thinking about the country,” says Pardeep Hooda, 42, who hails from a farming family in Haryana state and works in the seed business.

He says he’s unsure whether to stay or go home.

“I will miss all these friends! It’s been one year. Now these [fellow farmers] are like my family,” Hooda says. “This has been the best year of my life. It really educated me how to fight, and how to live.”