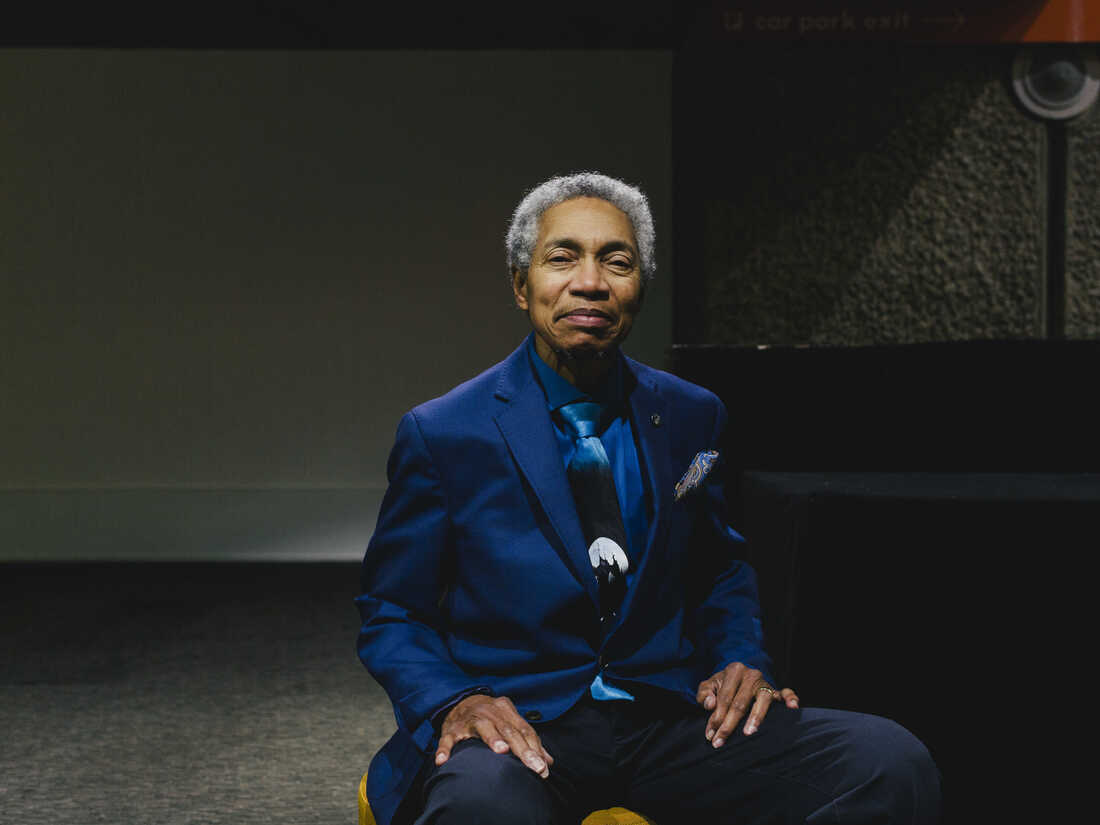 Beverly Glenn-Copeland, or Glenn as he’s known to friends, compares himself to a radio that’s tuned to pick up certain frequencies. These ideas and sounds, which typically defy classification, come to him by way of what he calls the “Universal Broadcast System.” He sees his role as merely to receive and transcribe them, then send them back into the world as music.

Born in 1944, Copeland grew up in a planned racially integrated Philadelphia community known as Greenbelt Knoll. His father was a pianist, and his mother sang spirituals. Copeland left at age 17 to study classical music at McGill University in Montreal. He was the only Black student in the program, and identified as a lesbian at a time when transgender identity was neither well understood nor accepted.

Worried for his safety, his parents tried to have him treated with electroconvulsive therapy. Instead, Copeland dropped out of school and started writing songs. He released two self-titled albums in the early 1970s, many of the songs recorded in single takes. His first, the folk-inflected Beverly Copeland, also revealed elements of his classical training, particularly his background in German lieder.

His follow up, Beverly Glenn-Copeland, reflected his relocation to Toronto and interest in the city’s buzzing jazz scene. Produced by Doug “Dr. Music” Riley, and backed by accomplished bandmates such as guitarist Lenny Breau, Copeland started to find his creative footing. Still, the music was difficult to categorize, and therefore difficult to market.

Copeland moved to rural Ontario and got a job creating music for children’s television. Then he got his hands on an Atari computer and a drum machine, an experience he describes in the new documentary Keyboard Fantasies as freeing. “I suddenly, for the first time in my life, had access to wild sounds that a piano couldn’t make, that a traditional acoustic instrument couldn’t make, plus I had access to things that almost sounded like a violin if you squinted really hard with your ears. It was like finding toys.”

In 1986 Copeland self-released a cassette album of meditative songs called Keyboard Fantasies. At the time he sold only a few dozen copies. But over the next three decades his music quietly circulated around the world. In 2015, Japanese collector Ryota Masuko reached out to Copeland, explaining that discovering his music was “an emotional experience” and asking if he had any stock copies for sale. What Copeland didn’t know was that Masuko was highly influential, sparking inquiries from several labels who have since reissued Keyboard Fantasies as well as other Copeland’s other recordings.

British filmmaker Posy Dixon says she first heard Keyboard Fantasies in 2017. “I can remember so clearly the sound of Glenn’s voice and just being like, wow, who is this, what is this music? And I also remember thinking: I have no idea if this is someone from contemporary times, somebody from the ’70s, if this is a man, if this is a woman.” Dixon started searching online for more music, eventually finding Copeland himself. As their friendship deepened, Copeland realized the best way to connect with his audience was to meet them.

Although he hadn’t been onstage for years, Bianca Palmer says the first time she saw Copeland perform at Sappyfest in New Brunswick, Canada, she was awed. “That music is so much of his own acceptance of himself, and just like an incredible listening in relation to his body and the world and nature itself.”

In the intervening years, Copeland had embraced his trans identity, and started practicing Buddhism. Palmer says it was clear that he was there to share more than just his music. “He just thanked our generation for caring about this world. Everyone was just dripping with tears.”

After the show, Copeland came out to see Palmer play drums with her own band, then invited her to form a multiracial, all-genders ensemble, which he dubbed Indigo Rising. They embarked on a tour across Europe, playing a number of dates before the pandemic paused live performing.

Looking back at their time together, Palmer reminisces, “We have so much to learn from him, so much to catch up on.”

Dixon filmed Copeland and Indigo Rising performing at the 2018 Le Guess Who? Festival in the Netherlands for her documentary Keyboard Fantasies: the Beverly Glenn-Copeland Story, now streaming and screening at festivals. Dixon says she hasn’t shined a spotlight simply on an overlooked talent, but on a figure who is in many ways transcendent.

“Glenn’s story has so many elements that connect with so many people,” Dixon says. “His position as an elder, a queer elder, as a queer elder of color who is living this rich, beautiful, calm, successful life is such a powerful vision.”

Among the artists who cite Copeland as an inspiration are Le Guess Who? co-curators Moor Mother and Devendra Banhart, Caribou, Four Tet, Moses Sumney and Blood Orange. Another, singer and cellist Kelsey Lu, says they believe Copeland’s legacy is only beginning to be realized.

“There’s this feeling of love that I think we all, as fans, really feel,” Lu says. “And I also think that we don’t have as many elders to look up to in that way that Glenn holds as someone who has been unapologetically themselves through time, and has been able to exist and survive and thrive.”

This past summer, in collaboration with electronic musician Asma Maroof and filmmaker Wu Tsang, Lu honored Copeland with a collaborative multimedia installation at New York’s Guggenheim Museum. Now Lu is among the contributors to Keyboard Fantasies Reimagined, a tribute album that builds on Copeland’s boundless soundscapes, which will be released next month.

Last year, Copeland told NPR’s Ari Shapiro he’s grateful young people are embracing his music and message—though he humbly claims he’s only the medium for these cosmic transmissions. “It’s good to know that the music that’s being sent to me is making a difference for folks in one way or another. And yes, that means I’m fulfilling what I’m supposed to be doing at this time.”